Unlike yesterday’s recipe which lacked apple liquor, page 22 of Mr. Boston’s 1935 edition is chock-full with orchard goodness. All four recipes involve a spirit that is relatively new to us but apparently it was very popular with our forefathers.

We didn’t know what to expect from Applejack, and honestly this wasn’t a page I looked forward to. I feared Applejack would taste like the overly sweetened candy liquors I’ve tried in the past. The mere thought made my stomach hurt 🙁

Being rated well and reportedly one of the oldest produced in the U.S.A., we decided to try Laird’s Applejack.

While it’s easy to think of Applejack as a fun term for plain old Apple Brandy, apparently the two are quite different. Both Apple Brandy and Applejack are distilled from apple cider but the “jack” part of the name holds a special meaning to the end result.

Simple-cocktails.com notes that today’s version of Laird’s Applejack is “jacked” by blending neutral spirits with Apple Brandy. Traditionally, a freeze distillation method was used to create an Applejack where the apple cider is fermented at freezing temperatures (usually by leaving the cider outside during the winter). Unlike standard heat distillation that allows methanol and other bad stuff to be separated from the final drink and removed, freeze distillation can lead to poisoning as there is not a good way to remove the unwanted parts of the spirit.  Apparently the name “apple palsy” was coined to describe the severe hangovers which resulted from over intoxication of vintage made Applejack.

During our Hi-Times Liquor adventure, we picked up a bottle of Laird’s Applejack and a bottle of Laird’s Bottled in Bond 100 proof Apple Brandy. As a stand alone spirit, both bottles reminded us of Cognac and neither yielded a strong apple flavor. To my delight, neither spirit was syrupy at all.

First up last night was the Applejack Cocktail.

Calling for a 3 ounce cocktail glass, the recipe gave few clues on the liquor quantities needed (surprise, surprise!) Ryan and I thought the 2/3 Applejack, 1/6 Grenadine & Lemon Juice mixture was not likely to adequately fill a 3 ounce glass even with ice melt. We toyed with the idea that Mr. Cotton meant 2/3 of a 3 ounce glass but after melt that could be too much. Finally it was decided to bring the Applejack quantity up to 1-1/3 oz and the Grenadine & Lemon Juice would be 1/3 ounce each. 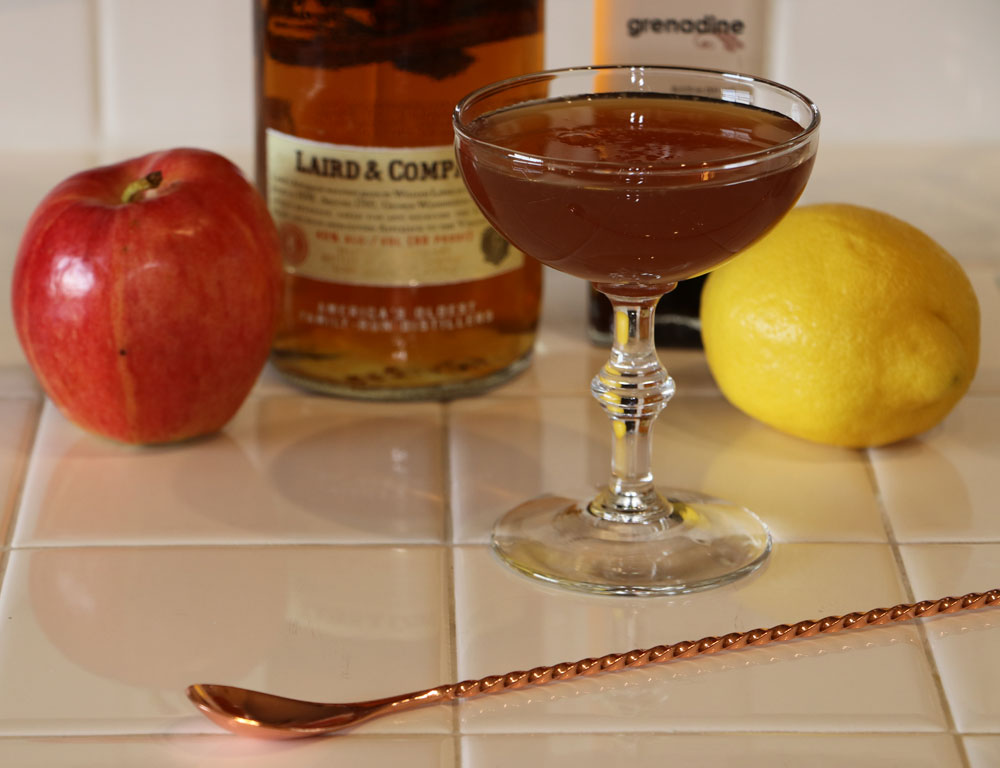 Though the recipe does not say so, we shook this drink over ice. Lo and behold, the final cocktail was the perfect serving size in our little 3 ounce coupe. Ryan thought this might be his favorite recipe of the book so far and I would tend to agree. Contrary to my earlier hesitations, I really liked the Applejack Cocktail. Oddly enough, the apple favor magically appeared from its prior slumber and crafted a drink that was a tasty alcoholic apple juice! This is going to be a go to cocktail in our future 5 o’clock happy hours for sure.

Following the high of the delicious Applejack Cocktail, our next recipe called for a built drink of Applejack and Ginger Ale over ice. Vaguely asking for “1 Drink of Applejack” we sought explanation from Google and found a drink likely meant 1-1/2 ounces. An 8 ounce Highball glass is to be prepared with “1 cube of ice” and filled up with Carbonated Water or Ginger Ale. Knowing that the water would likely make for a boring drink and that our homemade Ginger Beer could be too heavy, we popped open a can of Canada Dry. 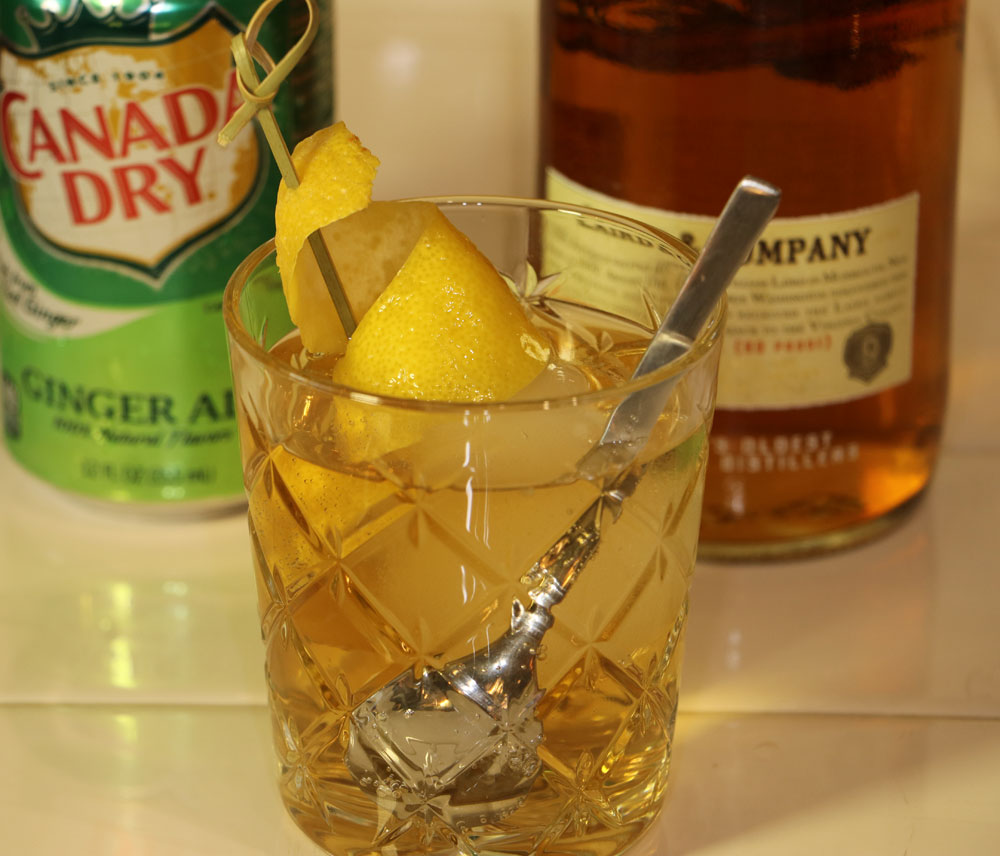 The recipes notes serving the drink with a small bar spoon and piece of lemon peel. The bar spoon tipped us off that this drink was meant to be made in the serving glass rather than shaken aka a built cocktail.

Having become accustomed to the strong ginger spice of our home brewed Ginger Beer, the light bubbly Canada Dry was a little artificial at first. However, as the drink ingredients married together, my old admiration for Ginger Ale came back. Yet again, we were surprised to find that we both really enjoyed the Applejack.

Next up was a take on a classic Gin recipe, The Applejack Rickey. Since the amount of citrus juice used in most of the recipes thus far have been a little too subtle for my taste buds, Ryan and I decided to go to the max suggestion and use a whole lime for the Applejack Rickey.

In an effort to get as much juice from the fruit as possible, I decided to cut the lime in quarters and muddle the juice out rather than using our squeezer. Being a thick peel, I had some trouble getting the leverage needed to really give those buggers a a good squeeze but Ryan stepped in to lend a helping hand and got the juices flowing. 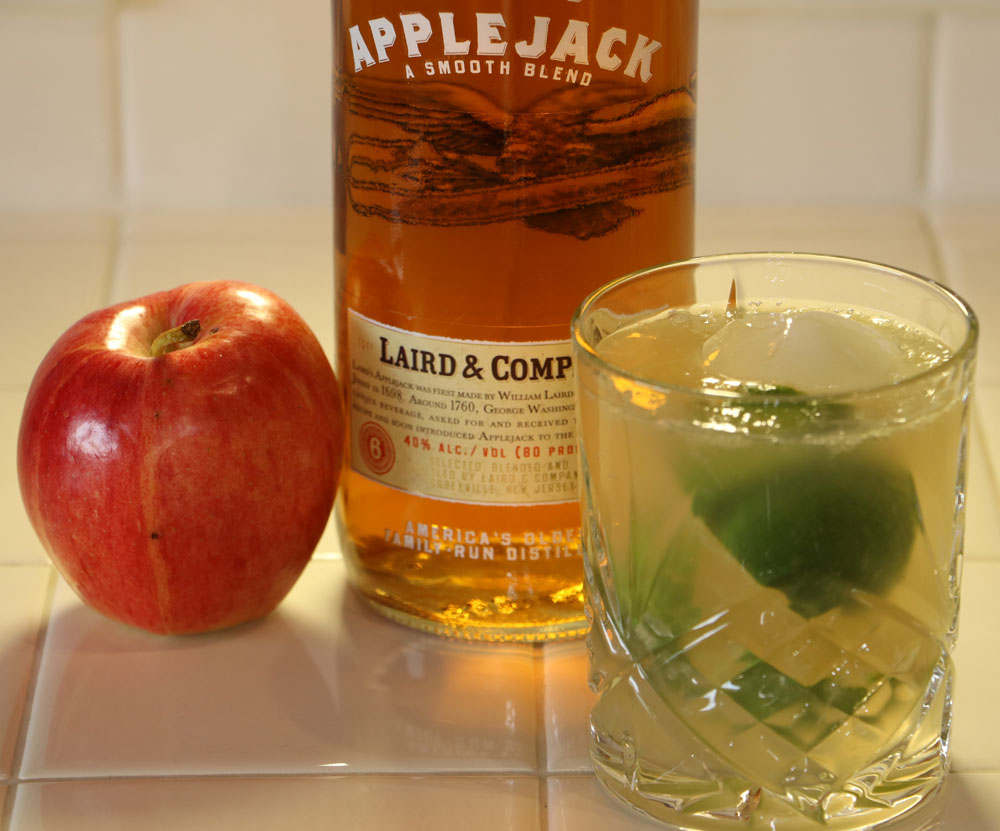 Since Applejack is not a sweet drink to begin with, I was concerned our choice of citrus quantity could prove too much pucker power. But after adding the cold sparkling water suggested to the mix it wasn’t half bad. What did happen however was that the lime juice was too strong for the Applejack to come through. Maybe we are just too boozy these days 😉 Either way, we added another ounce of liquor to the drink and it perked right up.

Last but not least was the Applejack Sour. I had a hard time believing it could come close to the sourness of the Rickey but sure enough it did! 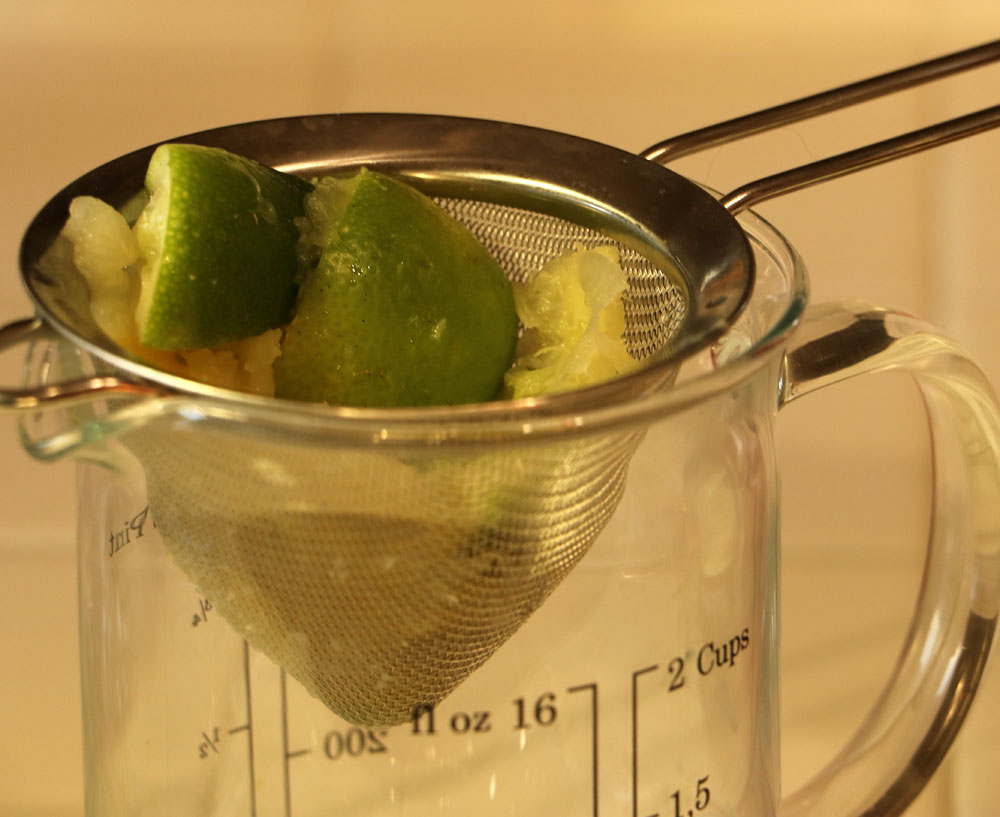 The Applejack Sour uses 1/2 a lime and 1/2 a lemon along with Grenadine and powdered sugar. After shaking the mixture over cracked ice as instructed, our strained cocktail failed to fill the 6 oz glass noted to use. Turns out our citrus had greedily stolen some of our liquor!!! So we transferred the fruit to a strainer and squeezed as much liquid as we could which turned out to be a lot! Our once 1/2 full glass rose to about 3/4 of a glass and I added an ounce of sparkling water to further the cause.

We decided that the Applejack Sour was a bit too sour and added 2 more dashes of Grenadine plus another 1/3 of an ounce Applejack to round out the flavor. We call it Sunrise over the Orchard, I’ll post the recipe shortly if you’d like to give it ago. Let us know what you think 🙂

Until tomorrow, here’s to your health!