After two of these, you won’t even need a horse. Ride ’em cowboy!

Cowboys were all the rage in the early days of the American West.

Long before television and Clint Eastwood helped popularize the rough and tumble, Will Rodgers traveled the country with his Vaudeville show featuring, among other things, his cowboy inspired rope act. 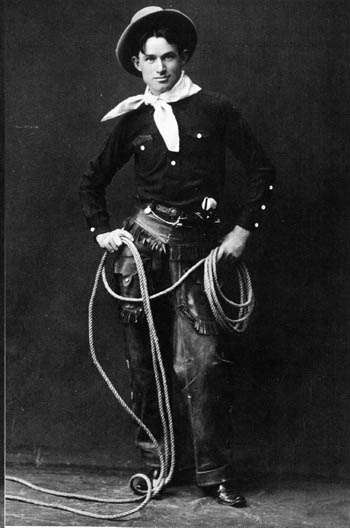 A multi-talented performer, it seemed Will was also quite a writer. By the 1920’s, his syndicated newspaper column and radio appearances helped raise his popularity. By the time of his death in 1935, the man had starred in 21 featured films and was at one point the highest paid actor in Hollywood.

Now… I have no proof to my theory but I can only imagine that this famous cowboy could have been the inspiration for Judge Jr.’s 1928 recipe, the Cowboy Cocktail. Judge seemed like a jolly guy and Rodgers was a comedic act – seems as good a guess as any 🙂

Today’s Mr. Boston’s recipe is probably one of the more simplistic of the bunch. Comprised only of two ingredients… Whisk{e}y and cream.

My predecessor over at the Savoy Stomp wondered why a cowboy would have cream but it seemed rather logical to me since Cowboys work with cattle.  I can only imagine that a ranch hand would have an abundance of dairy. Plus, the whiskey back in the wild west was reportedly pretty bad – no doubt cream could have been a nod to covering up the ill tasting hooch.

When deciding which Whiskey to try this recipe out with, I had several options laying about. My natural instinct was to go with a smooth, slightly sweet Bourbon or a Canadian Whiskey… then I discovered Judge Jr.’s Scotch suggestion.

Scotch doesn’t strike me as a Cowboy’s go-to. I suppose it seems too refined for the notoriously less than refined man. But as a bonafide Scotch hound, it did sound tasty!

Rather than spoil a perfectly good nip of Glen, I opted to try out a teaspoonful with cream and see if it tickled my fancy first.

Well…. I’m happy I tested this first because if I hadn’t, I’m not sure I would have been able to finish the cocktail.

It wasn’t a bad drink, more like potent… eye burning, nose scorching POTENT! Maybe I shouldn’t have gone with the cask strength Nadurra after all.

Next, I sampled the Cowboy Cocktail using Evan Williams Bourbon. The pair was much more enjoyable but still not exactly interesting. I’d liken it to a Bourbon Milk Punch without the sweetness. It’s OK, but not really my thing.

After trying this cream / Whiskey combo, I’m less convinced that the cream was meant to mask the flavor. In fact, I thought it enhanced the Ether and did little to hide the character of the spirit.

Since neither drink was enjoyable, I decided to get creative with the Pumpkin infused Vodka was made last year.

Before this Mr. Boston’s blog series, I would never have dared make raw egg cocktails and being that Eggnog was never my favorite it is surprising to have discovered a Pumpkin Eggnog Latte that I can get behind. This tasty cocktail is perfect for Halloween or after a holiday feast – you should give this one a try!