Every time we made one of our many pilgrimages to the liquor store, Ryan pointed out that we didn’t yet own a bottle of Creme de Violette. Trying to be frugal, I reminded him of the expense that still lay ahead as there were a lot of spirits left to purchase for our Mr. Boston’s experiment. Despite combing the pages for a thorough shopping list a couple weeks ago, Creme de Violette never popped up and as a result it wasn’t added to the list until last nights cocktail revealed itself.

Given the drinks resurgence of popularity, we were made aware of Creme de Violette’s existence because of The Aviation Cocktail. While making my long list of needed ingredients, I had failed to read the cocktail titles. If I’d been paying attention I should have noticed that The Aviation was listed. Strangely enough, Mr. Boston’s recipe didn’t list Creme de Violette as an ingredient at all which explains why I didn’t see it.

The grey-purple Gin cocktail we know today has transformed over the years. In doing my homework about Creme de Violette, I discovered a 1917 cocktail book written by Hugo R. Ensslin. The book is said to hold the first known recipe for the Aviation Cocktail and is purportedly the last American cocktail book published before the 18th Amendment was ratified in 1919.

Just as today’s Aviation Cocktails call for Creme de Violette, so does the original recipe. The lack of this prized Violet flavored liqueur from Mr. Boston’s 1935 (post repeal) edition raised some questions and set me on a quest for answers.

While I didn’t find solid proof to my theory, it appears that the U.S. prohibition of alcohol caused Creme de Violette to disappear from American liquor stores following repeal in 1933. In its stead, Creme Yvette took market share for a time until production was ceased in 1969. While various other recipes which had once called for Creme de Violette listed Creme Yvette as a suitable replacement, Leo Cotton omitted both from The Aviation recipe listed in the 1935 book. Mr. Boston’s website still lists the original Aviation recipe from Ensslin’s 1917 book sans Creme de Violette. 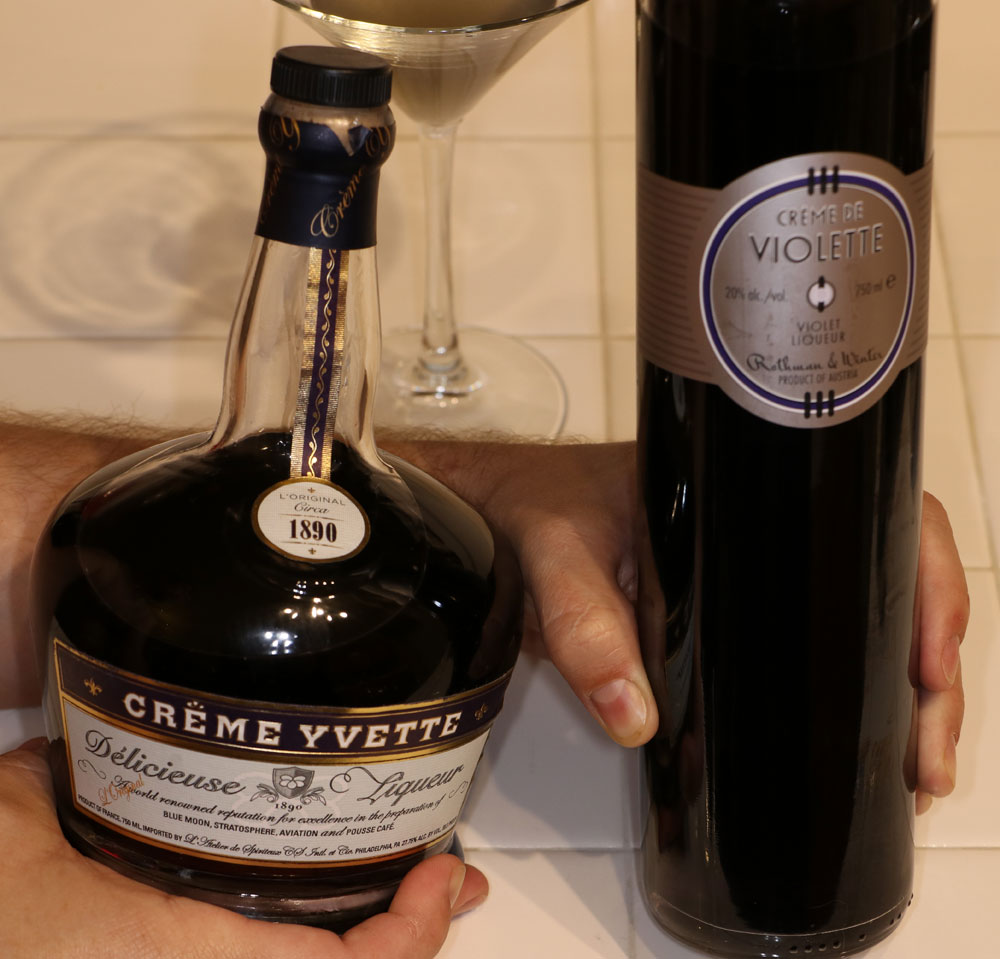 I’m ashamed to say that we hadn’t tried an Aviation Cocktail before embarking on last nights cocktail. Better late than never 🙂

Since Ryan was so curious about Creme de Violette and I even more curious about how the original Aviation Cocktail tasted, we made our now daily trek to Total Wine for the dark purple liqueur. Said to be one, if not the first Creme de Violette’s to make a come back to U.S. store shelves, I decided to try Rothman & Winter. We were a wee hesitant at first due to the drinks list of food coloring but since today’s Aviation is known for the color, we took the plunge.

The first impression of this Violette flavored spirit is that it smells like floral shampoo. Not in a bad way mind you but, it isn’t a smell that makes you want to drink the stuff. Thankfully, the taste is lovely and sweet. While some have described it as soap-like, I didn’t get that in the taste. It is indeed an unusual flavor though.

As for the drinking portion of the experiment, I decided to make The Aviation Cocktail four different ways to compare them. While our homemade compound Gin, Lexardo Maraschino and freshly squeezed lemon juice was used in all four drinks, the quantities and use of Creme de Violette was different in each.

Trying the original recipe from 1917 was a must but given that this is a blog series on Mr. Boston’s 1935 edition I had to try their version as well. Both recipes call for identical portions of Gin, Maraschino and juice but the original asks for 2 dashes of Creme de Violette as well. Besides the obvious color differences, Ryan and I both liked the original best. Ryan thought it still a bit pungent on the citrus juice however. I liked the way the drink started off tart and melded into the sweet Violet and Cherry to finish.

The original recipe was no where near the dark grey – purple hue of today’s Aviation Cocktail photos. As such, I decided to round up a modern take on the drink and mixed one up. Of course as we have learned, the new recipe is larger than the older ones. More over, the updated version calls for 1/2 ounce of Maraschino and Creme de Violette in place of the 2 dashes mention in the original recipe. The increase in Creme de Violette made a huge difference in the color of the finished drink.

Finally, out of shear curiosity, I decided to replace the Creme de Violette and mix up the modern Aviation Cocktail recipe with the same portion of Creme Yvette. After all the later Creme was listed as a replacement for a spell. The end result was a sweeter drink with a warmer red hue. It was quite good but modern imbibers who have become familiar with the Creme de Violette version would likely miss the mysterious grey-purple color.

After sipping on all four cocktails side by side, Ryan and I liked the Creme de Violette version over the others. Mr. Boston’s was our least favorite. The Creme Yvette was a bit sweet but still nice. The modern version was a bit heavy on the Maraschino and Violette but the color was most impressive. I think my preferred version would be the original with double the called for Creme de Violette. I’ll have to give that ago sometime soon and post an update with the results.

When next we meet, the first of the B section will be revealed! 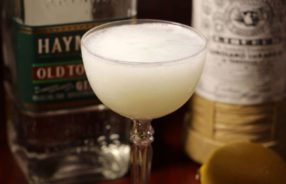 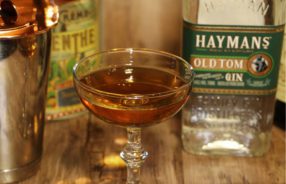