After looking through a look-back at Halloween’s past blog post yesterday, I was inspired to do a special pumpkin spiced rum infusion. The funny thing is that it was a pumpkin Vodka infusion that actually started our love of crafting cocktails in the first place but we haven’t revisited the idea since the Halloween of 2012.

Since All-Hallows-Eve is coming up in 14 days I didn’t want to do the same recipe we tried out in 2012. That recipe called for 2 -3 weeks of infusion time and there wasn’t nearly enough time.

Usually the higher the proof, the faster the infusion time. With that in mind, we decided to start the infusion with 190 proof Gem Clear Vodka. Everclear would have also been a great choice but they only sell the 151 here in Nevada.

In an effort to make the straining process a little easier, the ingredients were added to our re-purposed ginger beer brew sack that had been first placed into a recycled pickle jar.

The main ingredient is a 15 oz can of 100% pure pureed pumpkin. This would be the same pumpkin you would use for making your homemade pumpkin pies next month.

Next we added in 1 TSP of our Some Like it Hot Cinnamon infusion spices, 1/4 TSP ground Allspice, 1/2 TSP ground Ginger and poured 1-1/3 cups of the alcohol through the sleeve. After giving the bag contents a through stiring with a spoon, the mesh bag was closed up and the glass container lid tightly sealed up the jar.

The resulting mixture was a bit ugly to look at but it smelled delicious.

After letting the jar rest on the counter overnight, we opened it up and gave it a quick taste test. While the pumpkin flavor was strong the spices needed more time. Not wanting a 190 proof spirit at the end, we decided Rum would be a great liquor choice for cutting down the ABV.

The 80 proof Bacardi Rum brought the total proof down to 135 which is better but still a bit on the wild side. Adding 1-1/3 cups of filtered water will bring that down to a smoother 68 proof but we wanted to let the high proof extract the spice oils a bit more first.

The Rum went in 16 hours after the initial infusion process began. Our pickle jar wasn’t big enough so Ryan presented me with the idea of using his pressure canister for finishing the job. It seems pressurizing infusions speeds up the process and since we had yet to try this technique this seemed the perfect time to give it a go.

With the CO2 regulator set to 20 PSI, we opened the valve and witnessed the hiss of gas filling the blue pressure canister of pumpkin goodness.

I could hardy wait to see how it worked!

After a long 8 hour wait, Ryan let me open up the vessel and give our monster creation a taste. As expected, it was STRONG! It also needed some more sweetness to really make it taste like a good Pumpkin pie should.

Following some pondering, one-third of a cup of organic sugar was dissolved into 1 cup of filtered water and added to our pumpkin liqueur. The sweetness was good but the proof still needed a little lowering and we added another 1/3  cup bringing the overall proof down to 68  (34% ABV). Much easier to drink for sure.

Finally the time came to filter our pumpkin alcohol infusion. In true form, Ryan wanted to use the 12 ton hydraulic press he’d set up for such an occasion.

The final product tastes AMAZING and it only took 3 days!

Our pumpkin rum infusion has inspired a new cocktail and now that we have close to 1 liter to enjoy I’m sure others will follow. Our first recipe we lovingly call Tipsy Pumpkin Pie. You can find the recipe here if you’d like to try it for yourself.

While this infusion experiment sounds ultra complicated it really can be done without all the fancy equipment. The trick is to let the ingredients infuse until you like the way they taste and strain it well with the help of a french press and a washable coffee filter. If you have any questions or suggestions, we’d love to hear from you! Please share your comments below 🙂 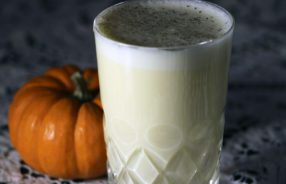 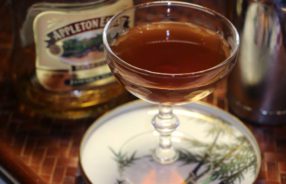 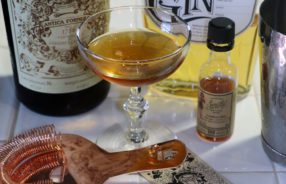 The Brown aka B.V.D. Cocktail