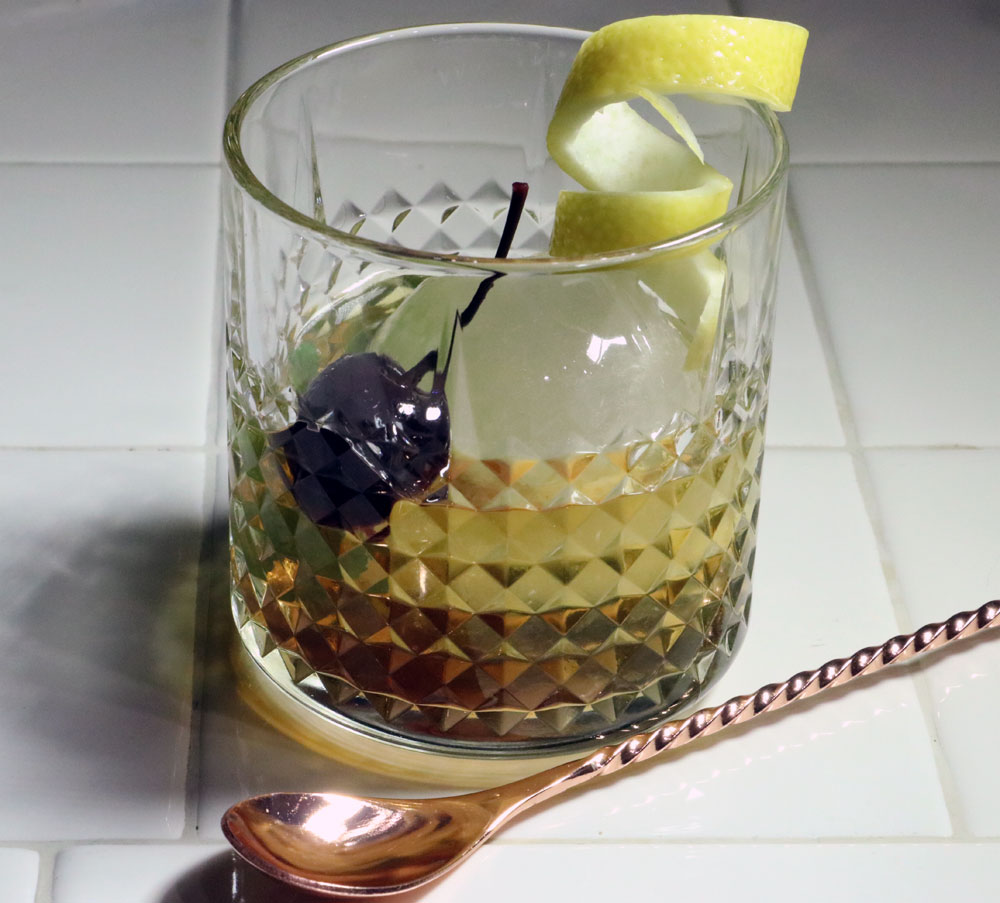 Swap out Apricot Brandy for the ordinary fair, reduce the mint and sugar – Voila! You have transformed a Brandy Julep into a Brandy Smash.

Both have Brandy, mint and sugar. Of the differences I see, the julep adds 2-1/2 times more sugar, 3 times the mint and a splash of water. It is also served over crushed ice while the Brandy Smash outlined in my 1935 Mr. Boston’s calls for one cube.

For garnish, the Smash appears to garnish with a touch more flare… that is if you’re referencing to the recipes from the 1930’s and not looking to Jerry Thomas for suggestions.

If Jerry had his way, both cocktails would be adorn with slices of orange. Leo Cotton published his Julep recipe sans fruit but notes the addition of a cherry, orange slice and lemon twist in tonight’s refreshment.

I assume the “smash” moniker is the result of muddling 4 mint leaves (Jerry calls for 4 sprigs). I suppose the addition of a fruit salad could also play a role in the name?

You get the picture 🙂

As I prepared the Smash I reached the end of that St. Remy bottle. The problem is, it died 1/4 ounce shy of the jigger line. Having already dissolved my sugar cube I decided replace the missing Brandy with Cognac. My other option was Apricot Brandy, but the St. Remy borders on the side of an aged Cognac and seemed to be the most logical pairing.

I followed Mr. Boston’s 4 mint leaves recipe but after completing the drink, Ryan and I thought it could have used a touch more mint. Despite the reduction in sugar, this was a fairly sweet cocktail. I think that more mint could have lowered that perceived sugar overload and may have resulted in a better balance of flavors.

The lovely lemon twist Ryan crafted added a wonderful aromatic treat and though I feared it may be strange with the mint, I really enjoyed the combination. Unfortunately, I killed the last of my orange for the Brandy Punch so I missed out on the full citrus experience.

The large ice sphere worked well to gently dilute the Brandy and Cognac while imparting the lemon essence into the cocktail. I think I enjoy an Old Fashioned and Mint Julep slightly more than the Brandy Smash but it was very good.

Tonight’s post is getting a late start because of the holiday. Hopefully I’ll be able to carve out a couple minutes to share the Brandy Sour recipe tomorrow. I’ll certainly do my best 🙂