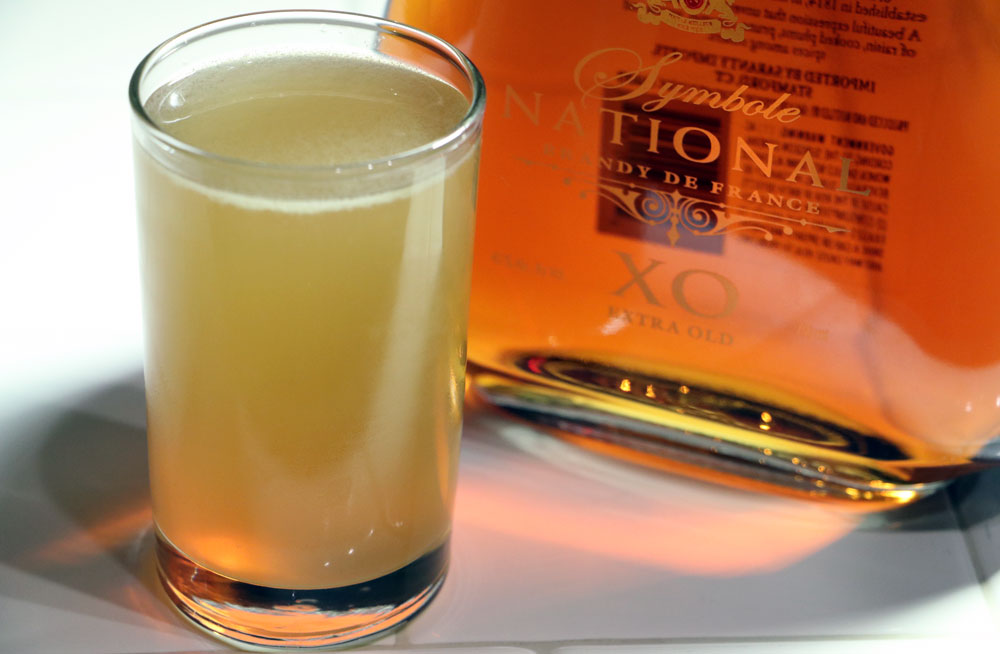 Between food, fun and fireworks; tonight’s Mr. Boston recipe almost didn’t happen. As it is, I may not have this post published by 12 am but I’ll give it a shot.

After running out of Brandy yesterday, we needed to take a trip over to the Total Wine for a replacement. Though I enjoyed the St. Remy VSOP, I really wanted to give something new a try. Having settled on a Spirits Direct (Total Wine’s signature line), Ryan asked an associate for a recommendation just in case.

“Carefully produced on the banks of the Charente river,” Symbole National is slightly sweeter than the St. Remy with lovely fruit notes at the finish. Where St. Remy leaned toward the Cognac side, Symbole appears to have a lighter aged quality about it. Some reviewer felt it was slightly sweet for their palette but I quite fancied it.

Mr. Boston’s recipe insisted I skip over to page 152 to follow the Whiskey Sour directions. The recipe is dead simple consisting of a jigger of booze (in this case Brandy), the juice of 1/2 a lemon and a teaspoon of sugar. Fruit garnish and/or carbonated water are optional. Either ingredient is specific on variety or measure.

Despite the added sweetness of the Brandy and the powdered sugar, this is a sour drink that lives up to its name. The lemon was overpowering for me and the drink did not adequately fill the Delmonico glass suggested. Ryan and I decided to bulk things up with sparkling water. I wanted to use lemon infused water but accidently grabbed the lime… OOPS!

I realize the Sour is a fairly popular cocktail choice but I’m not sure it’s for me. I couldn’t finish this one especially not after a night of drinking. It was way too tart for me! The lime water only made matters worse, yikes!

All I can say is, man I’m glad we enjoyed some tasty Mai Tai’s at the Golden Tiki today. If we hadn’t I would have been very disappointed in my beverage intake for the evening. But on the bright side, Brandy Sour is loaded with Vitamin C so, hopefully it will ward off this scratchy throat I’ve been fighting all day.

WOW, I can’t believe I was actually able to get this done before the day officially started a new and with nearly twenty minutes to spare! Time to hit the hay, tomorrow is one of the final three Brandy cocktails in this 21 day marathon – I can’t wait!!!