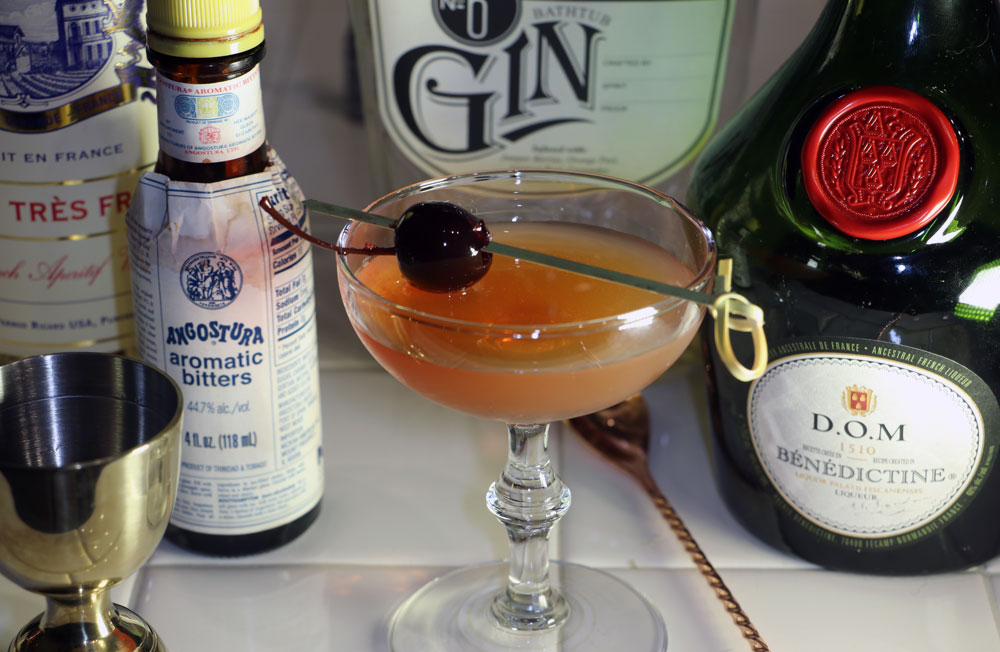 This is Market Week for West Coast retail buyers. Ryan and I joined in on the festivities in the hopes of spying some interesting new knick knacks to feature on our website. The event is held in two locations. Thankfully only one venue opened its doors today.

While exploring three, nine story buildings full of goodies; the Summer Market sweetens the shopping experience with complimentary refreshments. After seven hours of walking, two glasses of wine, a beer and a glass of Prosecco, it’s safe to say I’m not really thinking about partaking in Mr. Boston’s Cabaret Cocktail just yet.

The best example of form meets function that I’ve seen in a while – you have to love a dress made of glasses of Prosecco!

Unfortunately for my liver, it is getting toward the end of the day and I really should get going on tonight’s featured recipe before the clock strikes the witching hour.

My first “C” section 1935 cocktail combines some of my favorite ingredients including Gin, Bitters, French Vermouth and Benedictine. In researching this drink a little further, I discovered that Vermouth may have been a replacement ingredient. Enter Caperitif…

Apparently, this South African aperitif ceased production and has nearly fallen off the map. In 2014 a vintner out of Swartland recreated the recipe but as far as I can tell, their wine based spirit is not available near us. I may have to do more digging on this one.

In either case, it appears that other drinking historians have resorted to using Lillet Blanc as a substitute. Thankfully, I have a bottle calling to me out in the garage fridge. I also figure that Lillet would be a better pairing for the other ingredients the recipe calls for.

Lillet, Caperitif and Vermouth contain quinine from Cinchona Bark. Having played with Peruvian Cinchona, I can attest that the ingredient can impart a bitterness. Not knowing what Caperitif tasted like in the early part of the 1900’s I can only speak to the bottles of Lillet Blanc and Dolin’s French Vermouth that I have on hand. Personally, I favor Lillet’s slightly sweeter wine base to Dolin’s formula. As a lover of wine, the nuisances of the grape are more forthcoming to me in the Lillet.

The recipe Leo Cotton published for the Cabarnet is a Gin forward cocktail accented with two dashes of Bitters, two dashes of French Vermouth and 2 dashes of Benedictine. The earlier recipe found in Harry Craddock’s Savoy book replaces Benedictine with Absinthe. Also, the Caperitif is in equal proportion the Gin quantity.

Our first attempt used our home-brewed Gin, with the ingredient quantity listed in Mr. Boston’s book. I feared that the heavily flavored botanical’s of our Gin may overshadow the other ingredients but decided to give it a go. After mixing the cocktail Ryan wasn’t sold, I rather fancied it but agree that the Gin was rather strong.

Ryan mixed up another Cabaret with Beefeater 24, leaving the other ingredients in tact. Again, the Juniper was very pronounced and took over the drink. Next, we upped the Lillet to match Harry’s recipe and compared. I liked the sweetness that the Lillet added and thought the drink was better balanced. Ryan was still not a fan.

Having had many liquid refreshments for the evening, we stopped the experiment short of recreating the Savoy recipe in its entirety. Maybe we’ll have to revisit the Cabaret when our livers have had time to relax.