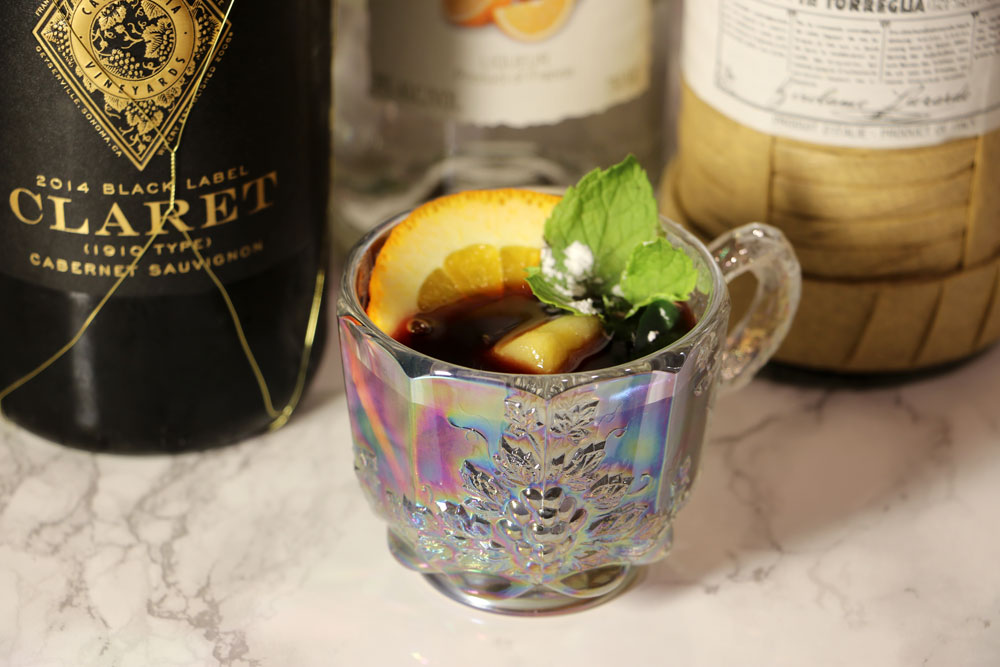 Last night left me so tired that I was unable to keep my eyes open long enough to share the Claret Cup with all of you. In fact, I was too tired to drink at all and found myself tucked into bed around 10 PM. That is highly unusual in our house 🙂

Ryan, Harvey and I were able to stop off at the grocery on the way home last night. However, we didn’t get in until after 8 and our late night dinner lulled me to sleep.

It appears that my delay on this particular Mr. Boston’s recipe may have been in the stars. In researching the drink, I discovered the Claret Cup is actually a rather old cocktail dating back to Jerry Thomas’ 1862 manual. I hadn’t really expected that since the 1935 script failed to wow me on appearance alone.

Leo Cotton published a Claret Cup that consists of Maraschino Liqueur, Curacao, powdered sugar and Claret. However, Jerry’s version calls for seasonal ingredients inline with a Mulled Cider. The peculiar part is that the elder recipe promotes a heavily Fall spiced refreshment as a “delicious summer beverage for evening parties.” I don’t know about you, but we normally reserve Cinnamon, Cloves and Allspice for the holidays.

Both recipes require a large quantity of ingredients. I believe that both were designed to be served punch-style though neither author states as much outright.

With Fall right around the corner, I wanted to give the older Claret Cup recipe a go first. The only problem is that the measurements were difficult to translate.

Not knowing what the standard bottle size for a “thin Claret” was in the 1800’s I was forced to go with our modern 750 ML measurement. I didn’t want to ruin the rest of our Claret bottle with spices before trying it out so, I needed to scale everything back to a single serving size. I decided on:

Because trying the Claret Cup was long overdo,  I figured that we should at least try the 1935 version. This is the Mr. Boston’s blog series after all 🙂

Yet again, I needed to do some math for a smaller recipe. Here’s what I went with:

Side by side, these are two very different cocktails. As expected the recipe from the 1800’s reminded me of Christmas. Ryan noted that the powdered spices, Cinnamon in particular, made for a dry drink. The nose is really lovely though. Surprisingly, it is more refreshing than I expected.

The winner of the evening was the 1935 recipe. Immediately both Ryan and I decided this was akin to a proper Sangria. If I had to guess, I’d say this recipe was the inspiration for the Spanish drink. In fact, I almost prefer it. Next time your looking to add some flare to your red wine, give Mr. Boston’s Claret Cup a try. You won’t be disappointed.