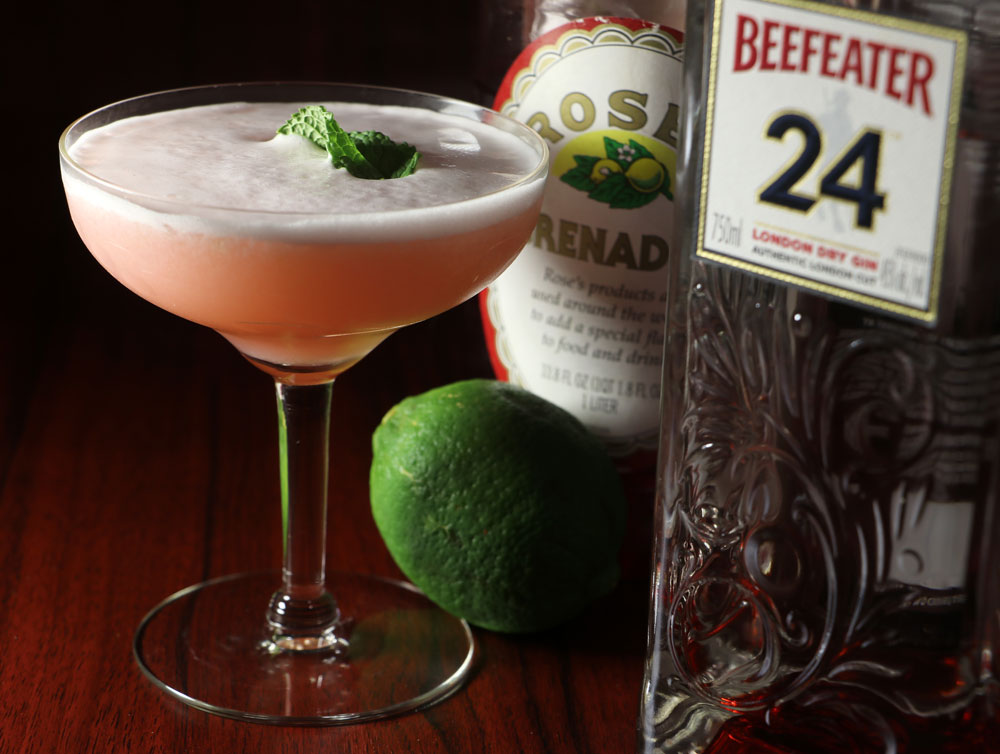 The Classic Cocktail required lemon juice. Sadly, we did not have another lemon in the house 🙁 In order to not take another zero day in the series, Ryan and I decided to skip over to the Clover Club Cocktail and revisit the Classic tomorrow.

The earliest record I was able to locate for the Clover Club Cocktail was published within Hon Wm Boothby’s The World’s Drinks and How to Mix them circa 1908. Unfortunately I didn’t discover this pre-Prohibition script until after mixing up the version Leo Cotton printed in 1935. After mixing the cocktail and reading the original, I’m convinced that the recipe was unnecessarily altered and not in a good way.

Into a mixing glass of cracked ice, add two barspoonfuls of imported Grenadine syrup (Raspberry syrup will answer the purpose), just enough fresh squeezed lemon juice to overcome the sweetness of the syrup, half the white of an egg, and a jigger of Coates Plymouth Gin; shake thoroughly, strain into a small Claret glass, and serve.

Twenty-seven years later, the recipe published in Mr. Boston’s maiden bartending manual played around with the quantities of the ingredients.

Rather than two barspoonfuls, the 1935 recipe calls for only 2 dashes of Grenadine. To make makes worse, the instruction for “just enough fresh squeezed lemon juice to overcome the sweetness” was replaced with orders to use the juice of 1/2 a lemon or 1 whole lime. Finally, a whole egg white is noted in the newer recipe while the jigger measurement for the Gin seems to have stayed true.

Some of the changes appear to have been first made by Harry Craddock and for some reason Leo Cotton saw fit to further reduce the amount of Grenadine. That reduction made for an overly tart cocktail with desperately needed repair.

Ryan’s first attempt at the Clover Cocktail used Beefeater 24 London Dry Gin and the juice of 3/4 lime, one egg white and a mere 1/4 teaspoon of Grenadine. Needless to say, neither one of us were a fan.

Next he added roughly 1/4 ounce of Grenadine. The drink was much better but I was missing the Gin and asked that he add 1/2 ounce of Hayman’s Old Tom Gin to see if that would improve the drink.

We were both much happier after our tweaks. I think I’ll give this one another go tomorrow with lemon juice to compare and maybe I’ll play around with Creme Yvette in place of the Grenadine. Hummm…