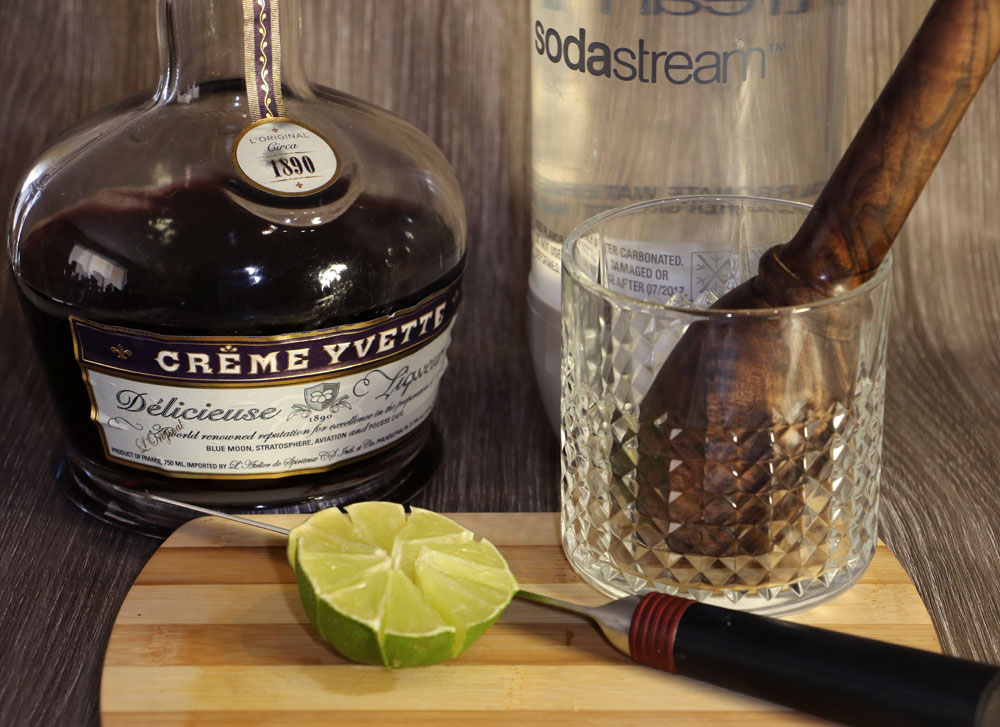 I can’t explain why, but for some reason I was procrastinating on today’s Mr. Boston’s recipe from 1935.

The Cordial Rickey isn’t earth shaking and maybe I just wasn’t feeling inspired by the simple mixture of lime juice, carbonated water and cordial. Whatever the reason, today is the day I get back to work on my quest to drink my way through this darn book!

One of the earliest references to the “Rickey” cocktail was to found inside Hon WM Boothby’s ‘The World’s Drinks and How to  Mix Them’ in 1908. While the Cordial rendition appears to be a Leo Cotton special, Boothby goes to length describing the proper preparation of a Rickey cocktail.

Carefully pick the seeds out of half a lime with the point of a lemon-knife, and then cut the skin in three or four places as you would cut a pie, but don’t cut all the way through the rind; place the half lime in a highball glass with a heavy bottom (there are rickey-glasses made expressly for this purpose) and muddle well with a toddy-stick; add a piece of ice.

A couple tidbits of this description caught my eye. Firstly, I was unaware that the Rickey had gained enough fanfare to warrant the production of a specialty glass. A quick search for this aptly named drink-ware left me empty handed 🙁

I also had no idea that a Muddler also goes by the name Toddy-Stick. This is rather odd since a Hot Toddy does not require any muddling these days. Turns out that herbs were once a frequent part of a Hot Toddy, I can only imagine the blunt end of the stick was used in place of a mortar and pestle.

The last part of the Rickey description published in 1908 lead me on the hunt for the patent of a Rickey-squeezer.

Note: Several different kinds of machines have been patented from time to time for the purpose of making Rickeys and some bars have adopted Rickey-squeezers with more or less success, but the above recipe is the standard way of making this famous decoction and probably always will be.

Until this afternoon, I had no idea just how many tools have been invented and patented for the sole purpose of juicing citrus, lemon in particular. Some of the oldest patent illustrations I uncovered date back to the 1800’s.

This lemon juicer from 1860 looks to be the predecessor for our handy yellow press – no need to change what isn’t broken I guess.

While the patents I uncovered did not specify that their press should be used for the sole purpose of making Rickey cocktails, it is funny to see that the invention of these tools peak around the time cocktails were in fashion. Aside from those patents filed in the mid to late 1800’s, the 1950’s and 1960’s had another boom of lemon squeezing machine patents. Maybe Mr. Boothby was on to something.

Drinking hard spirits in the middle of the day is not normally my thing but I had put the Cordial Rickey cocktail off long enough and had date night plans. Thankfully, the Cordial Rickey is nearly alcohol-free and sounded like a nice mid-day refreshment.

For some reason, Creme Yvette was still calling my name. Since the raspberry liqueur was way too sweet in the Cordial Highball, I decided to give it a try in this tart lime forward beverage.

Following Mr. Boothby’s strict instructions, I halved a fresh lime and divided it like a pie without cutting all the way through the peel.

After muddling the fruit in my highball glass, in went 1-1/2 ounces of Creme Yvette. No ice is mentioned in the preparation of the Rickey, nor is it called for by Mr. Boston. Since we store our Creme Yvette bottle in the refrigerator, I decided to try this one out without added chilling as instructed.

The lack of volume from the ice meant that my 8 ounce highball glass could fit more carbonated water. This helped dilute the alcohol content even further but I feared it would also water down the drink.

Now this is what I had imagined of the Cordial Highball!

The lime juice toned down the sweetness of the Creme Yvette and seems to have enhanced the berry notes. It is light, refreshing and still a bit intoxicating at 5.5% ABV. Of all the Rickey Cocktails I’ve tried thus far, this one is my favorite by far! I think I may have just discovered a new go to drink especially when the weather warms up again. The Cordial Rickey gets two very enthusiastic thumbs up from me 🙂