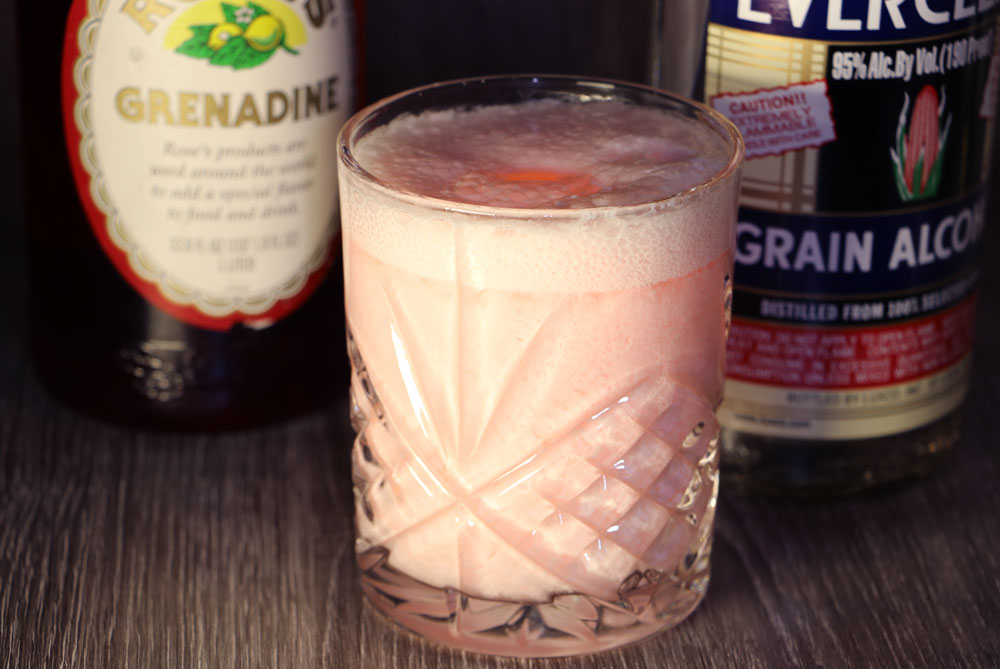 “Don’t get near a fire after drinking one of these!”

This ominous warning from Judge Jr.’s ‘Here’s How’ circa 1928, starts tonight’s Corn Popper Cocktail off with a bang!

How this particular refreshment gleaned it’s moniker seems pretty straight forward. Corn Whiskey has been an American staple for as long as the country has been in existence. The question is, which corn Whiskey to use.

I adore vintage alcohol labels. The fact that Mrs. Catherine Klausman is given credit as the distiller makes this label extra special! She doesn’t sound like any bootlegger I’ve ever heard of – LOL!

My initial thought was to mix up this vintage cocktail using Rittenhouse Bottled in Bond Rye. But after doing a touch more homework it occurred to me that the Corn Popper may be the perfect platform for a notorious high-proof spirit that gets a bad rap… Everclear.

We suggest Everclear as the base of our Absinthe Infusion. The ultra high alcohol content does a great job of pulling the essential oils from the herbs quickly. Since it’s also relatively void of flavor, the liquor doesn’t compete with the spice blend as it can with other base spirits.

Because Everclear has been misused by college kids for decades, the brand has been regulated and banned from many states across the country. While Everclear is available in both 190 and 151 proof, most states chose to offer one or the other and some have banned it outright.

Before starting our infusion business, I had misconceptions about what Everclear tasted like. In the name of science Ryan and I each tried a sip of the 190 version straight-up early in our blending phase. I was surprised that it isn’t as rough as I’d feared. Strong, YES but still oddly smooth and with a hint of sweetness. Honestly, I didn’t mind it at all though I respected the power that it’s high potency held.

All recipes for this drink are identical:

Now, Judge Jr. and Harry Craddock both noted that the Corn Popper recipe shown above be served in highball glasses. No mention is given to the size of said glasses. Leo Cotton took this a step further and clearly states that the recipe should serve 10 people. This tidbit helped me scale this potentially coma inducing recipe down to size.

A pint is 16 ounces aka 3/4 of a bottle of Everclear. This seemed like a lot of booze to sacrifice for one untested cocktail. As such, my Corn Popper Highball consisted of:

Before this evening, we were under the impression that Las Vegas did not allow the sale of Everclear at 190 proof. Turns out, they do!

After mixing, the seemingly deadly strong Corn Popper Highball is as strong as it sounds. I can see where this could have one stumbling about – the suggestion not to stand near open flame now seems logical.

In an effort to stay upright, Ryan and I split this serving. At over 50 proof, this one could result in a wicked hangover. Though tasteless, the alcohol is clearly present and required additional grenadine and sparkling water to smooth out the edges. After the doctoring was done, the drink reminded us both of a boozy Shirley Temple. The cream and egg effervesce created a nice foam on top.