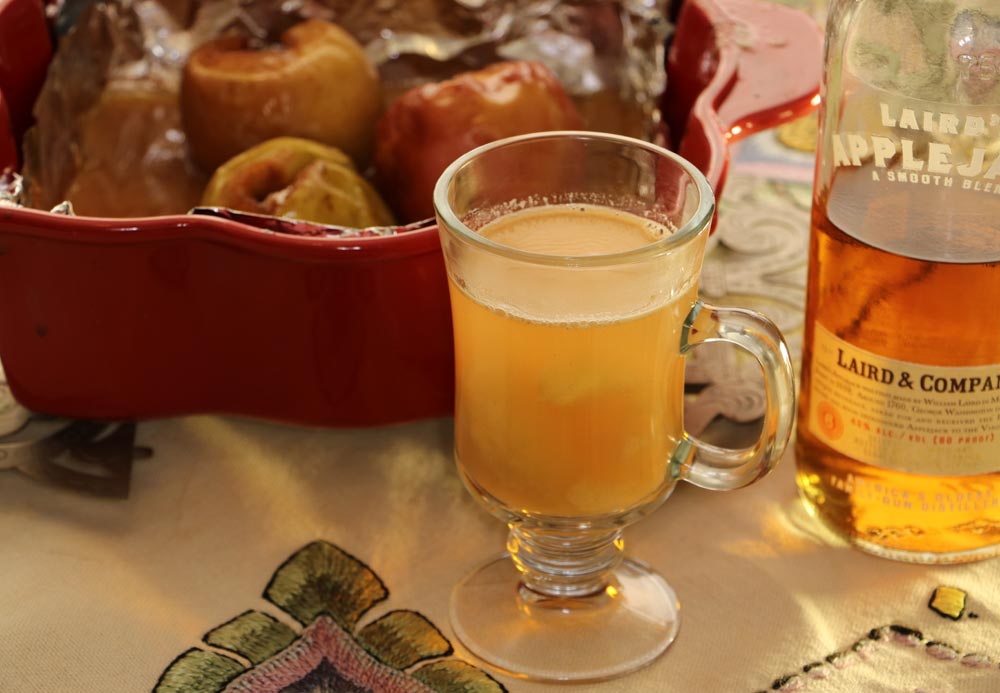 After a long work week, our poor 300 square foot kitchen looked as though a fraternity had thrown a raging party. The only difference is that the empty Fireball bottles, PBR cans and smattering of red solo cups had been replaced by pricey high proof spirits, shakers, jiggers and strainers.

While a white tile counter is a chore to keep up with on a normal week, cramming every nook and corner with bottles of booze makes the task of clean up even more of a challenge. The food in our fridge has been squeezed out by bottles of liquor and our outdoor “beer” refrigerator is stocked full too. Not to mention the three tiered 4 foot long cabinet in the dining room that is bursting with even more bottles! Yep, this Mr. Boston’s experiment has our home looking like it is inhabited by crazed alcoholics.

I knew that today’s cocktail, the Apple Toddy, would require a thorough cleaning of our war-torn kitchen so I took care of the 2 loads of dishes before heading to bed last night. Still, another hour and a half was needed before we could start the task of making a Apple Toddy Cocktail.

The Apple Toddy calls for 1/4 of a baked apple. Having little experience baking apples outside of pies or apple sauce, I turned to the internet and some vintage cookbooks we inherited for direction. In anticipation of this afternoon’s drink, Ryan and I stopped off at the grocery store last night to pick up some apples.

Each recipe I read for baked apples called for a different type of apple. We thought our normal variety of choice, Gala, would work but wanted to taste a couple others in the name of science. Knowing that Granny Smith is a good choice in a Apple Pie, I grabbed one of those in addition to a Honey Crisp and Fuji. Some recipes suggested Yellow Delicious but in my experience if the apple has the word delicious in the name it usually isn’t.

After clearing a counter for the task, we prepared a basting liquid to add to the bake in an effort to keep our apples moist and prevent browning. We decided to combine two recipes into one.

Using Julia Child’s suggestion of adding Cognac to the bake (why not!?!), via the Pommes À La Sévillane in Mastering the Art of French Cooking, we added 1 jigger of liquor to fresh juice from 1/2 a lemon. The liquid came in handy as a way to keep the cored apples from turning before all 4 could be prepared. After using a paring knife to carefully carve out the center of each apple, we submerged them in the lemon / Cognac mixture until the next was done.

For the filling, we consulted the Baked Apple from my 1970’s copy of Betty Crocker’s Cookbook. While following the instructions we failed to realize that the recipe does not say how many apples the filling will make. After stuffing each of our cored, soaked apples with the combination of softened butter, cinnamon and brown sugar; we had enough mixture left over for at least one more apple.

Trying to spoon the sugared butter into the wet apples was tricky business. The batter wanted to stick to the spoon more than it wanted to go into the apple so Ryan decided to go primal on it and stuff the holes with his hands. It wasn’t pretty but it got the job done. Note to self, for future apple stuffing adventures we need to remember a corer and piping bag!

Not one for waste, Ryan decided to cover the surrounding peeled area of the apple with additional mixture in the hopes that it would keep the apple from drying. After each piece of fruit was properly dressed, we popped them into the preheated 375 degree oven and set a timer for 30 minutes.

Julia Child’s recipe called for a 325 degree oven for no more than 30 minutes, while Betty Crocker said 375 for up to 45 minutes. Since Julia’s recipe is a braised apple and Betty’s a backed apple, we opted for the later to stick with Mr. Boston’s noted ingredient.

At the 30 minute mark we found that two of our beautiful apples had toppled over in the baking process. Thankfully, we had left over stuffing and after using Julia’s suggestion to poke the apples to test there readiness proved that the apples needed some more time; we righted our wonky fruit, re-stuffed it and popped it back in for 15 more minutes.

I turned the oven down to 325 for the last 15 minutes to give the newly stuffed apples time to marinade. The extra time softened the apples up but the Granny Smith suffered a skin explosion 🙁

The taste taste was the best part of the process and after giving each a try we both agreed that the Honey Crsip was the clear winner.

In a 78 degree house, drinking a hot beverage is hardly appealing. I had a feeling this book would turn up a weather inappropriate recipe at some point. The Apple Toddy combines 1/4 of the baked apple with 1 tablespoon of powdered sugar, a jigger of Applejack and roughly 3 ounces of boiling hot water.

Normally I don’t care for hot alcohol as I find the heated vapor burns going down. I do however love non-alcoholic apple cider in the winter. Though some of the burn is still present in the Apple Toddy, it is a really tasty drink! The low sugar makes a sometimes syrupy apple drink less rich and would be awesome on a cold day or for holiday gatherings.

All said and done, the Apple Toddy took more than 3 hours to prepare. On the bright side, my kitchen got a scrubbing. My ordinarily cat proofed dining room table also got a temporary makeover. I’ll have to cover it up again so that Sambuca (our fur baby) doesn’t coat the top in long Tabby fur while we’re asleep.

As I finish this post along side this Apple Toddy my final thought is, man those are some boozy slices of apple!!! It ought to be a fun night here in Vegas 🙂