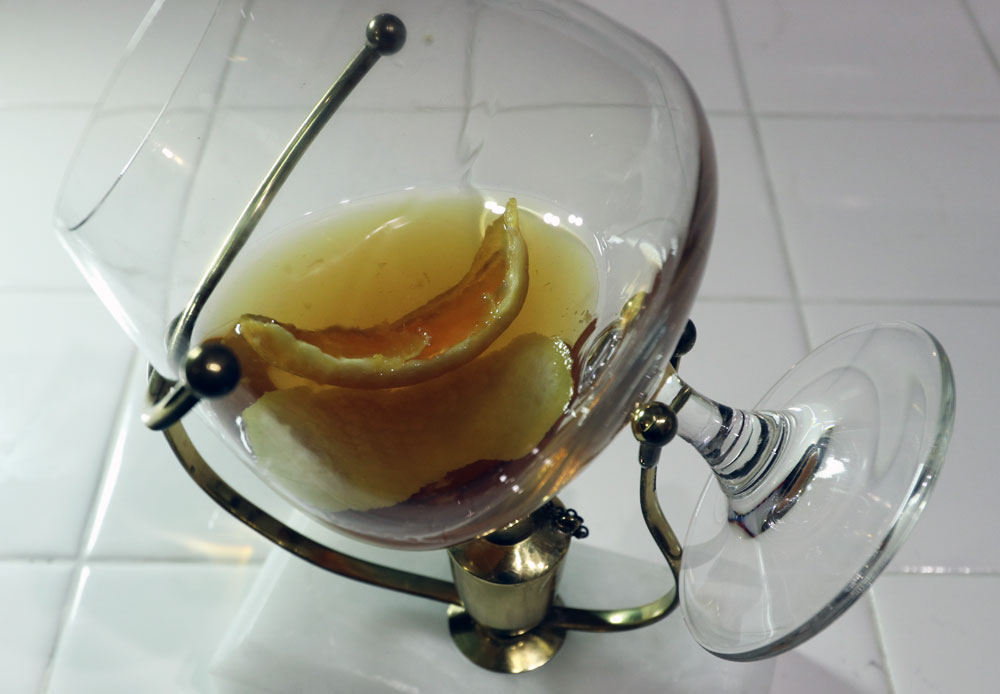 Fire and alcohol make an encore with the Brandy Blazer Cocktail. But, unlike the magnificent Blue Blazer, this alcoholic beverage is not intended to be tossed about. Instead, I believe the flames are meant to be more practical and less flair. Plus, I don’t think the lower proofed St Remy VSOP Brandy would be able to handle being douched with hot water repeatedly.

Brandy / Cognac aficionados agree that the drink should be sipped slowly at room temperature around 70° F using a snifter stemmed glass. Until today, the Brandy cocktails throughout this 1935 cocktail book, have all been served ice cold.

If you have ever tried to drink a hot alcoholic drink from a wide mouthed glass, you have likely overcome your senses with the strong steaming ethanol. It burns your nose, it burns your eyes and the burn isn’t from the flames! Not pleasant and certainly not something I’d enjoy doing slowly.

The only other recipe I found for the Brandy Blazer Cocktail, was in Harry Craddock’s 1930 Savoy Book. Both Craddock and Leo Cotton agreed on the ingredients. Leo Cotton suggests using a Hot Whiskey Glass while Harry merely says to use a small thick glass.

Conveniently, the handy glass guide in the back of the Mr. Boston’s book doesn’t have an illustration for a “Hot Whiskey Glass.” They have a Hot Toddy Glass measuring 5-6 ounces, a Whiskey Glass at 1-1/2 to 2-1/2 ounces and a Brandy Inhaler that is void of any measurements. The Savoy book doesn’t appear to give any clues on which stemware to use.

By matter of deduction, one could assume that a small thick glass would fall in line with a stout shot glass whose measurements are in the range of the aforementioned Whiskey Glass. Than you look over the ingredients once more and realize that an orange and lemon peel would not logically fit into a shot glass. Not to mention that flames just seem unnecessarily dangerous without something to contain them.

There is some heated, pun intended, debate about this next piece of boozy equipment.

I first laid eyes on this same Brandy warmer in the same antique mall where Ryan and I discovered our cute carnival glass mug. It’s not every day that you see a stemmed glass suspended over a mini-lantern. At least, I don’t recall ever seeing one before. The vendor had placed a wine glass into the holder and was marketing the piece as a decanter. Clearly, he/she wasn’t sure what they had.

The Brandy warmer has been around for centuries. I have no idea when mine was crafted but it has a solid marble base and a slightly tarnished brass glass rack. Naturally the tiny heater was missing its wick. Idea’s on where to find a replacement from the mall staff included Home Depot’s rope department or Michael’s craft store. We struck out at both. The closest match was a replacement Tiki Torch wick but it was too big 🙁

Plan B was to use a rolled-up cotton facial pad. Sounds silly, but it worked!

We didn’t have any lamp oil for lighting this Brandy warmer so Ryan tried camp stove oil instead. BAD IDEA! Not only did the entire warmer go up in flames, Ryan burned the hell out of his thumb while throwing the hunk of stone and metal into the sink to extinguish the flames. It isn’t a great idea to use water for putting out a fuel fire but we didn’t have our trusty fire extinguisher handy. After trips all around Las Vegas we decided to use rubbing alcohol as fuel. It worked after lowering the cotton wick and reducing the amount of liquid in the well.

Both cocktail recipes I found are extremely vague on instruction. Aside from the lack of clarity regarding liquor quantity, each recipe goes on to describe the drink as stirred and set aflame. That is where the directions begin and end. Assuming that a glass of Brandy is roughly 2-1/2 ounces (may as well fill the Whiskey Glass 🙂 ), I added the peel of an orange and lemon to the glass, a lump of sugar and gently poured in the aged liquor.

Mr. Boston says to stir than light while the Savoy version states to light than stir. Since we were going to use two heat sources, I didn’t see any reason to light up the glass before stirring.

Heating the Snifter glass over an open flame reminded me of camp fire S’mores. Less gooey but mesmerizing. Slowly rotating the glass as the sugar cube melts away is somehow soothing.

The first S’more recipe was published in a Girl Scouts manual in 1927. Like many of these vintage cocktail drinks, no one knows for certain where the idea came from.

The Snifter was designed to help evaporate the liquid and trap the aroma inside the glass. The warming enhances the aroma and adds to the flavor and experience of the drink. Too much warming creates that unpleasant vapor I described before and is the reason most connoisseurs frown on the Brandy warmer, thus creating that debate I alluded to earlier.

In an effort to maintain the freshness of our spirits, we’ve been storing the expensive and wine based liquor in a restored 1932 GE refrigerator out in the garage. In the excitement of the flames, we neglected to let liquor warm to room temp in the glass before placing it on the warmer. As a result, we couldn’t get the Brandy to light causing a black soot to form in the cup. If you look closely you’ll notice the sugar wasn’t able to fully dissolve yet due to the temperature of the spirits.

I was raised on the myth that alcohol burns off with cooking. Well it isn’t a complete myth… the alcohol does burn off but it takes several hours to work its way down to 0. This peaked my curiosity, how did the flames affected the ABV of this cocktail?

According to a handy chart I found on the Office of Alcoholism and Substance Abuse Services website (BTW… the irony is not lost), flamed alcohol retains 75% of its initial alcohol content. If true, tonight’s Brandy cocktail clocked in around 60 proof.

The Savoy recipe has this note written beneath the Brandy Blazer:

“This can be drunk whilst still alight if so desired.”

After the thumb incident and nearly burning down our house, Ryan and I decided to save our lips and his facial hair from disaster. We extinguished the drink before giving it a try.

The glass was WAY too hot to put up to our lips and the vapor was extremely strong. Wanting a nice flame video, we ended up lighting the drink on fire 3 times. Coupled with several minutes over the fire, I think we overheated it a wee bit.

It took 5 -10 minutes to cool and we were able to finally enjoy the fruits of our labor. Man is it good! The heat helped release the citrus oils and the sugar was completely dissolved. The vapor is strong but after allowing it to fully chill out, the aroma is heavenly.

I see why they don’t sell these Brandy warmers these days. They are really fun but really dangerous if you don’t have the proper supplies. Now that we know how to use it correctly, I have a feeling this drink will be enjoyed more often especially during the holidays 🙂