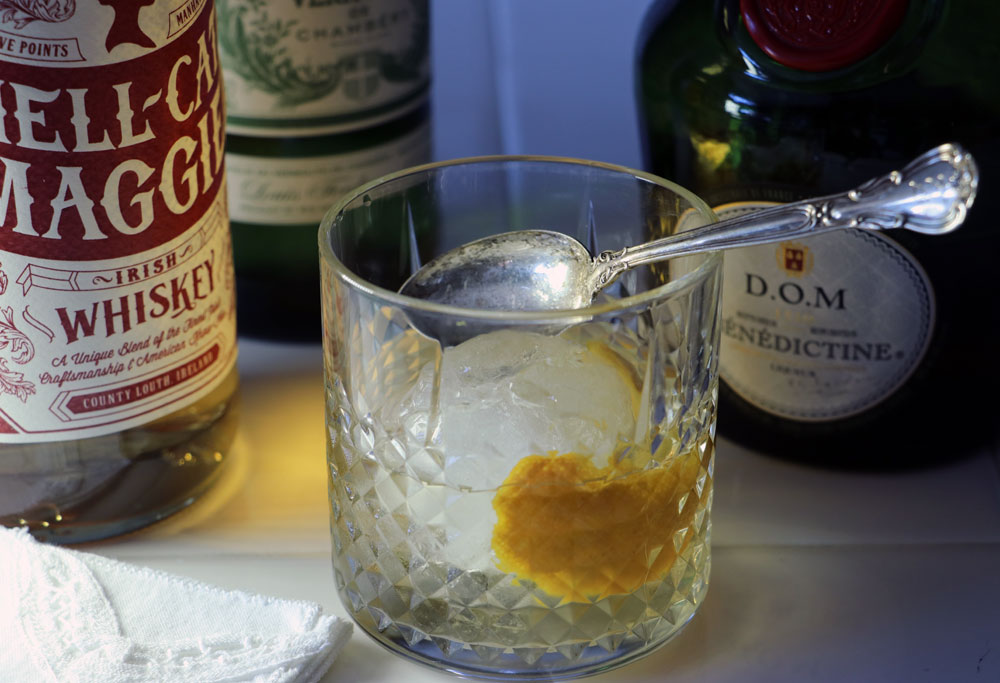 With a name like Brainstorm, I expected today’s Mr. Boston’s cocktail to honor a famous inventor.

After conducting my daily vintage cocktail book hunt, the oldest version I could find was in Hugo Ensslin’s 1917 ‘Recipes for Mixed Drinks.’ With great enthusiasm I set off to see what else could be found online.

Many of the world’s most infamous inventions came long before 1917. Of the genius’ alive during the early 1900’s, Albert Einstein was as big as they came.

A mere 2 years before Ensslin’s cocktail book was printed, Einstein published his gravitational field equations of general relativity. He was living in Switzerland at the time but I can only imagine that word of his discovery did not take long to reach the United States.

I have no evidence that any of this is related. It is said that Einstein was not a big drinker and, there is no indication that these German born men knew of one another. Maybe this aptly named beverage inspired a little creative brainstorming of my own?

The drink recipe sounded as interesting as the name. With a combination of Irish Whiskey, French Vermouth and Benedictine, how could you go wrong?!

Off the bat, I had a feeling the 2 dashes of Benedictine called for was going to be too light.

The Brainstorm Cocktail is a built drink, calling for a cube of ice and a small bar spoon. Being built gives the drinker control over how much dilution they’d like. Also, fidgeting and brainstorming tend to go hand and hand… so there is that.

It blows the mind that a small 1/4 tsp of Vermouth could overpower a rich strong Irish Whiskey. Something in the combination of herbs within the Dolin’s French Vermouth is very powerful. I’m not sure I’m particularly keen on it but it grows on you. Where Italian Vermouth blends beautifully with Benedictine in a Bobby Burns, I wasn’t loving the French version combination as much from the start. I don’t think it is the Whiskey difference as much as the lack of sweetness. I’m beginning to sound like I have quite the sweet tooth 🙂

The Bobby Burns contains more than 8 times the amount of Vermouth than the Brainstorm requires. Yet, the dry stood out in a more prominent fashion.

After enjoying a few cocktails last night, I made the Brainstorm as a nightcap. I think my taste buds were blown out from the other refreshments because the drink I made last night did not taste as good as the one I’m enjoying as I wrap this post up.

I didn’t have the required orange in the fridge to make the “proper” drink and maybe that hint of citrus essence made all the difference.

Preparing today’s Brainstorm by the book, I noticed that the Vermouth isn’t as potent. It could be that the ice melted more while I hunted for Grammy’s heirloom silverware to add to the photo. Maybe the smell of the orange? Whatever the reason, the delightful honey flavor from the Benedictine came through and it made me very happy!

The Brainstorm Cocktail is a sipper. Thoughtfully stirring the glass as you slowly enjoy the refreshing cocktail gives your tongue a chance to pick up all the nuances of the herbal goodness within. If taken too quickly, I don’t think this cocktail would be as satisfying.