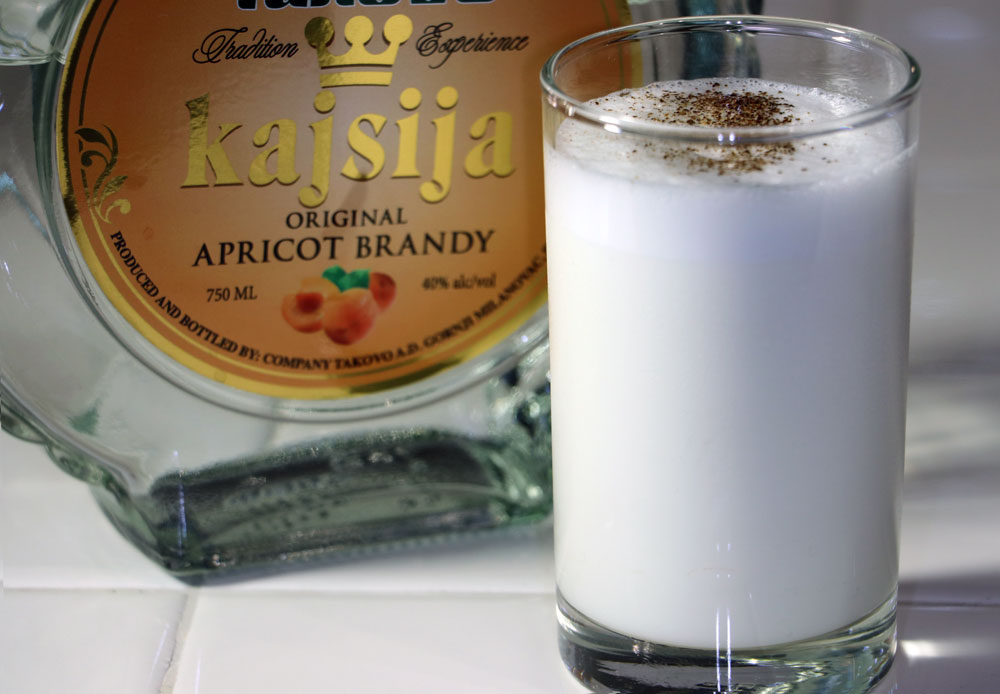 Brandy Milk Punch is a new one for me, but this cocktail appears to have a long history and ties to New Orleans – double win!

Have I mentioned lately how excited I am for Tales of the Cocktail? Well… I am! Today’s post only helped amp up my anticipation. Only a couple more weeks – YAY!!!

Nothing too wild about that 🙂 In search of inspiration, I happened upon an article about the modern take of this classic cocktail on Tales of the Cocktail’s blog.

Off the bat the author, Cara Strickland, mentioned a “New Orleans style milk punch with brandy and milk and a little bit of nutmeg.” I knew then that there was likely more to learn about this rather plain Jane list of ingredients.

Turns out, while Brandy Egg Nogg was George Washington’s go to, another founding father enjoyed his Brandy with sweetened Milk and lemon juice.

The Massachusetts Historical Society has a copy of a letter Benjamin Franklin sent to James Bowdin, (an American political and intellectual leader from Boston), which contains a recipe for Franklin’s Milk Punch. The cursive is a wee tricky to decipher so I did my best to translate it underneath the copy of the letter.

To make Milk Punch:
Take 6 quarts of Brandy, and the Rinds of 44 Lemon parce very thin; Steep the Rinds in the Brandy 24 hours; Then strain it off. Put to it 4 quarts of water, 4 large Nutmegs grated, 2 quarts of Lemon Juice, 2 pound of double refine Sugar. When the Sugar is dissolved, boil 3 quarts of Milk and put to the zest hot as you take it off the Fire, and stir it about. Let it stand two hours; then run it through a jelly-bag till it is clear, then bottle it up.

It seems oddly timed for the jelly-bag to pop up in Ben’s recipe. I intended on trying to figure out what it was for the Brandy Shrub I need to put together tonight – must be fate!

Being in the business of infusions, you’d think I would have been familiar with the jelly-bag. It probably did turn up on my radar at some point but I never gave it much thought. For those of you who make fruit spreads you probably have this gizmo laying about…

The mesh bag is finer than cheese cloth but not as fine as a coffee filter. Would be good middle step in filtering alcohol infusions to possibly speed up the process. Amazon has this model available for $9.95 – I need to track one of these down locally this afternoon to properly make my Brandy Shrub on Sunday. Wish me luck!

Old Ben’s recipe is huge! You would need 7-1/2 bottles of Brandy alone. Plus only a citrus farmer can get a hold of 44 good lemons easily. At today’s prices this recipe would cost hundreds of dollars to batch up. With that in mind, I decided today I’d stick to Mr. Boston’s version.

After discovering the Milk Punches historical roots I still needed to find how this fruity milk beverage related to New Orleans. It took a little more hunting than I expected.

The earliest known connection between this particular cocktail recipe and New Orleans is published in ‘The Picayune’s Creole Cook Book’ from 1901.’

Tucked away on page 323, this 116 year old recipe is a lot less alcoholic than Franklin’s rendition. Adding equal 1 Tablespoon portions of sugar and Brandy to a glass full of “Good Rich Milk,” this is recipe borders on mocktail territory. Depending on the ABV of Brandy available in the early 1900’s, this recipe only yields a cocktail that is roughly 3% using today’s standard 80 proof Brandy selection.

Seems a now famous NOLA restaurant took a fancy to the Milk Punch and after much trial and error crafted their in-house Bourbon Milk Punch creation. Now that I know this little nugget of knowledge, I must stop in to Dickie Brennan’s Bourbon House to try out this delicious frozen Bourbon Milk Punch. It was voted “Best Milk Punch” by Tales of the Toddy after-all 🙂 Something tells me that the Southern heat will having me craving more than one.

I’m tempted to follow the directions for Dickie’s Punch ahead of Tales of the Cocktail but I think I’d rather get it straight from the blend masters.

Back to Mr. Boston’s… Served ice cold, the Brandy Milk Punch recipe Leo Cotton published sounds much more appropriate for Summer sipping. Instead of lemons, the fruit steams from Brandy distilled from Apricots. Something about lemons and milk didn’t strike my fancy however, Apricots are right up my alley.

I intended on mixing up this number over lunch but forgot my book back at the office. It’s probably best because I was might have been tempted to put off the photo portion of the drink which would mean making another when I got home. Now that I say it, I gypped myself! I could have two DOH!

While the Brandy Milk Punch is usually holiday fare, I rather liked this cocktail on this hot Vegas afternoon. I can only imagine how delicious this drink is with vanilla ice cream! Now I’m even more excited for July 17th to roll around.