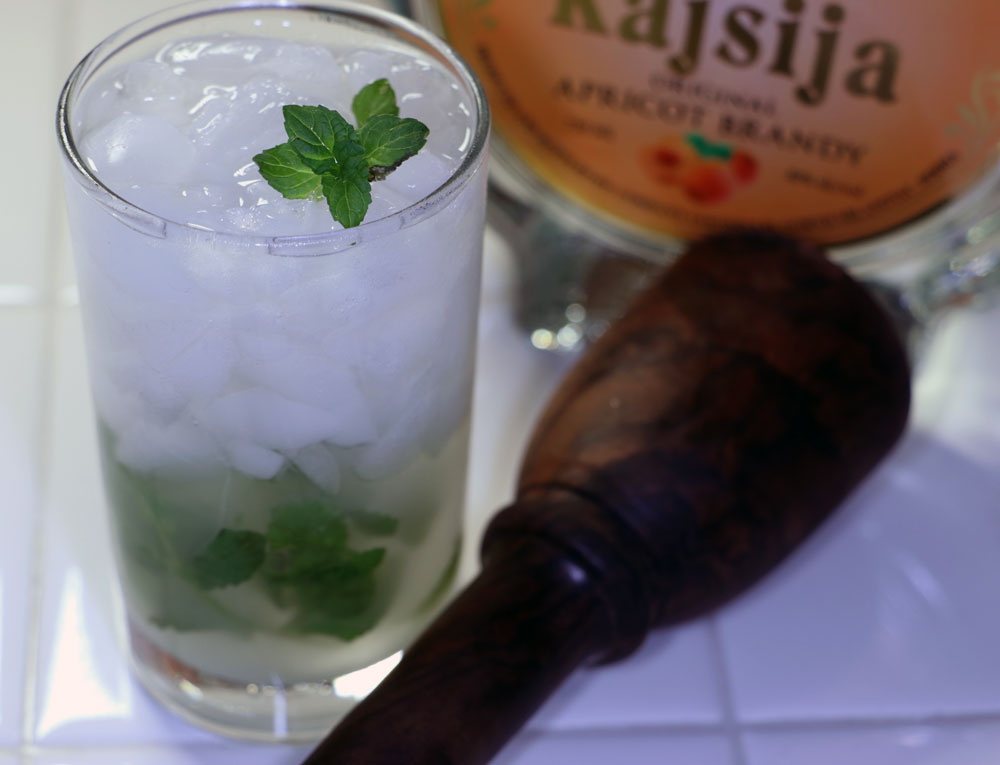 I would love to check out the Kentucky Derby one of these days. The hats alone are worth the price of admission!

Beyond the fancy clothing, this race is known for it’s signature drink, the Mint Julep. Today Leo Cotton added a recipe for an Apricot Brandy version and I am so excited to try it out.

The Julep is an old Southern American beverage that is traditionally mixed with Bourbon. According to Jerry Thomas in 1862:

“The art of constructing this famous Southern refresher is lost… Poor juleps have ruined the reputation of the South’s most famous drink.”

It seems Jerry’s biggest complaint was the preparation of the Julep –  in particular, the act of crushing the mint leaves.

We’ve all grown accustom to muddling. Mint leaves usually fall victim to over pulverization. All of the Mojito’s and Julep’s I’ve ever ordered contained pieces of mint rather than whole leaves.

I too have been guilty of over muddling until Ryan helped me see the light.

Part of Ryan’s beef with over muddling, is that he hates picking leaves out of his teeth when drinking a minty beverage. I however enjoy a little texture. Naturally, I ignored his complaint for a while by straining his mint leaf cocktails through a fine mesh filter.

It wasn’t until Ryan pointed out the added chlorophyll flavor that I took notice.

After giving into his theory that minty leaves taste better less smooshed, I noticed a difference in the grassy taste. I hadn’t actually detected it before. I guess it didn’t really bother me… that is until it was brought to my attention.

Spanking the mint, aka slapping the leaves between your hands, leaves the bartender with sore palms. It’s also loud! But Ryan insists it’s the best way to break open the leaves capillaries and release the oil. I favor using the muddler to lightly smash the leaves downward into the sugar at the bottom of a shaker.

Though Mr. Boston’s recipe calls for an unique spirit, I wanted to do my best to prepare the Brandy Julep per Jerry Thomas’ instructions. Rather than using Leo Cotton’s instructions to “muddle well” the sugar covered mint, I dissolved the powdered sugar in water, added in the 3 -4 sprigs of Spearmint and gave a slow downward push on the ingredients. No violent thrusting was required. I wanted the leaves to remain intact for the later half of Jerry’s instruction.

Mr. Boston’s recipe says to muddle the mint, sugar and water in a bowl as illustrated in this 1941 Four Roses advertisement.

I mixed up two of these beauties for Ryan and I to enjoy out in the sun. I must admit, now that I’m putting this experiment to paper, I noticed I goofed up on the sugar. The recipe from the 1800’s calls for 2-1/2 tablespoons of water to 1 tablespoon of sugar. I did the opposite. It seemed a touch too sweet but it was still really good so I didn’t question it. Thankfully I still needed to make another for tonight’s Instagram post – not the worst mistake ever.

Now for the question of presentation… Of late, I’m sure you’re seen those fancy silver platted cups floating around. Those silver Julep cups were first officially produced by Churchhill Downs (home of the Derby) around 1950. They are said to have been born out of WWII’s silver rationing to symbolize prosperity and the first prototype was brought out sometime during FDR’s presidency (1932 – 1945).

Darn it, by the time I found this beautiful vintage Mint Julep Cup on Etsy it was sold – missesd it by that much!

Oddly enough, I don’t own one of these silver cups yet. Fortunately, they weren’t around during the 1800’s so I’m keeping tonight’s drink period appropriate.

Mr. Boston’s recipe calls for a Tom Collins glass while Jerry Thomas’ book doesn’t give a preferred serving vessel. Though my highball glasses are prettier, I decided to use the 6 ounce Delmonico glass as it’s the closest I have to a Tom Collins.

After dissolving the sugar and muddling the mint at the bottom of the glass, in went the shaved ice. While modern recipes call for equal parts water and booze, Jerry stated plainly that: “No man can fall in love with such a measure.” He served his Julep straight-up… My kind of man!

Following in suit, I filled the glass with Apricot Brandy (about a jigger) and gave it a good stir.

The crown jewel of the drink is the mint leaves. Jerry insists one should remove the mint from the glass after stirring and tuck the springs into the ice along with berries and small pieces of orange. Though his “Real Georgia Mint Julep” consisting of peach brandy omits the fruity garnish. As the Apricot Brandy recipe is also crafted from stone fruit, I too left out the fruit garnish.

The Brandy Julep made up for a week of lack luster cocktails before it. After redoing the goof on the sugar, the drink is still sweet but the Apricot is much more pronounced. Either way, this is truly a delicious, refreshing cocktail. We have to get our hands on one of these while down in New Orleans, it is a wonderful way to beat the heat!