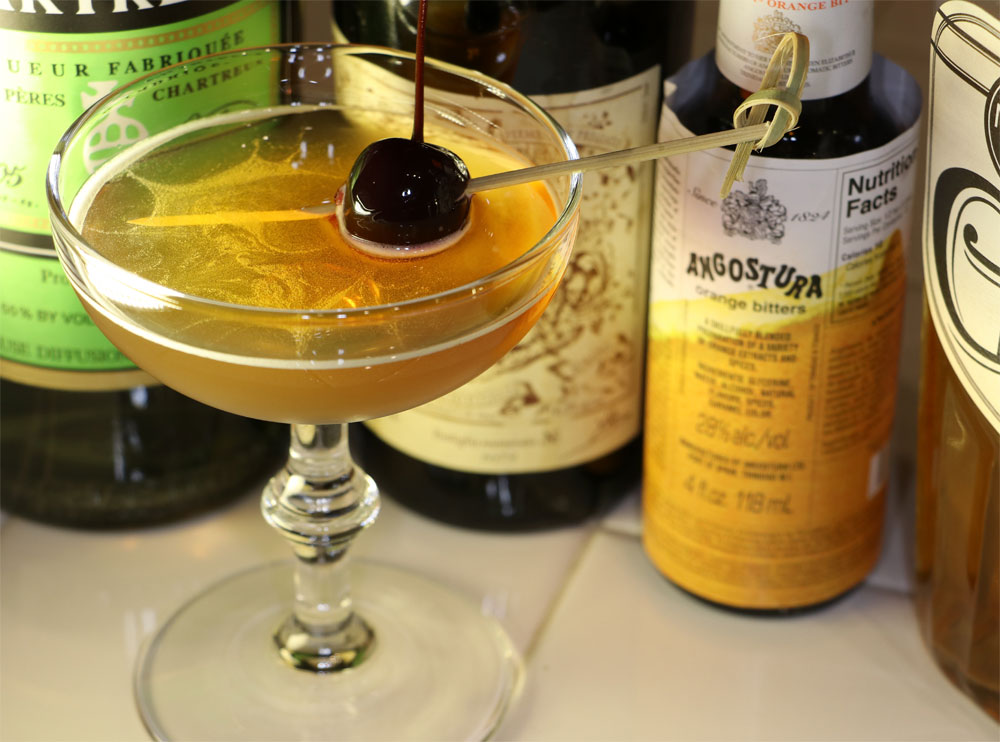 Tales of the Cocktails is celebrating its 15th year and we get to cover all the action this July down in New Orleans! A couple months back, Ryan and I applied for media credentials to share the event with all of you and our application was accepted. We are over the moon excited 🙂

As I mentioned before, Chartreuse has never been our thing. Yet, the Bijou ingredients sounded like something we might enjoy so we were excited to mix the drink up.

Once again Math tortured my brain and we turned to Google for help finding the perfect balance of spirits. I finally made a note in the book so that I don’t have to play Einstein to mix a cocktail. If only a Jigger was 1 ounce instead of 1-1/2 it would the whole fraction quandary so much easier!

We decided to mix the Bijou Cocktail as follows:

This recipe falls in line with both Mr. Boston’s recipe and that listed in Jacques Straub’s 1914 ‘Drinks’ which calls for 1/3 Jigger of each spirit. The later recipe omits the bitters and cherry garnish.

My first impression of the drink was that it was rather swampy in color. Bijou can be used as a noun to describe a jewel but I didn’t see any beauty in the brown-green tint of this particular cocktail. I would say perhaps the bitters muddied things but the dark reddish hue of the Vermouth would do that all on its own.

Sadly, the taste was not much better 🙁

Both Ryan and I noticed the strong fish-like flavor of Calamus Root in the bottle of Yellow Chartreuse we picked up. However, our sample sized green version appeared to lack this potent herb and was more mint forward. The Bijou called for more spirit than our little sample size had left in it so I cracked open a full sized bottle for the drink last night. Having tasted Green Chartreuse before we didn’t bother giving the new bottle a sample before adding 1/2 ounce to the shaker. After giving all the ingredients a good shaking over ice as directed, we took our needed glamour shot and tasted the cocktail. To our chagrin, it wasn’t great.

At the forefront was a health dose of seaside flavor. The Calamus Root took over the drink for us. It was rather perplexing. To see if we had lost our taste-buds we decided to break out our small bottle and give it a swig for good measure. The two bottles were totally different.

According to their website, the Carthusian Monks have been hand crafting the spirit using 130 herbs and plants for more than 400 years.

I tried to get a good color comparison shot for your viewing pleasure but I’m not sure if the lighting was quite right. If you notice, the left green is slightly pale in comparison to the liquid on the right. I can’t be 100% certain that it isn’t the bottle providing the difference but it is noticeable in person.

The aroma is different as well, with the smaller bottle being mintier than the brand new bottle we purchased. It’s really strange and Ryan decided to reach out to Chartreuse for answers. We haven’t heard back just yet, but I’ll let you know if we do.

For us, the Bijou Cocktail was a bust, but with a dash of Absinthe and more Gin added in, Ryan was able to enjoy the final drink a bit. Perhaps we’ll need to try this one out down in the bijou in a couple months 🙂