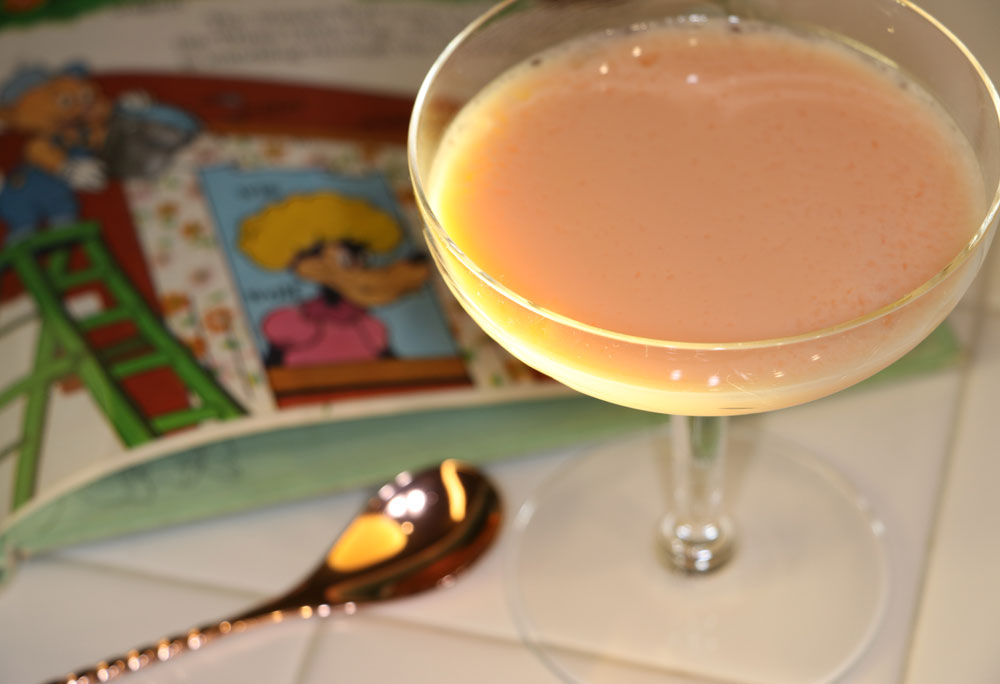 Of all the drink inspiration I thought I’d run across in Mr. Boston’s 1935 cocktail book, Disney was not one of them.

The Big Bad Wolf Cocktail brought to mind the Brother’s Grimm classic Little Red Riding Hood. For the life of me, I couldn’t figure out what Curacao, Apricot Brandy, an egg yolk and Grenadine would have to do with Red or her grandmother so I turned to Google for some clarity.

Searching for 1935 Big Bad Wolf, the first entry to top the list was a 1934 Walt Disney production called Big Bad Wolf. Being a Disney fan, I had to watch it and see if I could learn anything for today’s cocktail post.

For those of you who enjoyed the 10 minute cartoon as much as I did, you might have noticed that aside from Granny liking her wine, they didn’t really mention drinking in this short. It does appear to be a bit more adult oriented though and rumor has it, originally cartoons were written for adults instead of children.

After mixing the Big Bad Wolf ingredients, the closest similarity I could gather was the color. When held up to the 1983 Disney print I found, the cocktail matched the skin tone of the little piggies perfectly. The only other comparison may be wolves love for raiding chicken coops but I think that is reaching 🙂

Name aside, the Big Bad Wolf was remarkably delicious. If Disney’s Club 33 doesn’t serve this cocktail yet, they really should!

The ingredients listed are simple but when mixed they are really very balanced. While I thought the raw egg yolk sounded gross, it added a fantastic creaminess. I would have thought the drink had milk in it if I didn’t know the truth. The Big Bad Wolf unexpectedly made the top of my list of best drinks so far.

I think the biggest revelation from the Big Bad Wolf Cocktail is that Mr. Boston’s 1935 edition is turning out to be an unexpected time-capsule.

On the surface, the book is just a bunch of booze recipes for bartenders to help lubricate thirsty patrons. But, as I delve further and try to read between the lines of each drink, pieces of history are popping up left and right.

While I was quick to associate the Mr. Boston’s book with the repeal of Prohibition in 1933, I forgot that America was also in the middle of the Great Depression at the time this book was published. Not to mention it was the Golden Age of Hollywood era. These historical factors seem to have played a major role in how Leo Cotton viewed the world and in turn edited this bar tending guide. I have a feeling, more historical references are yet to be discovered in this recipe book which makes my geeky side very happy!