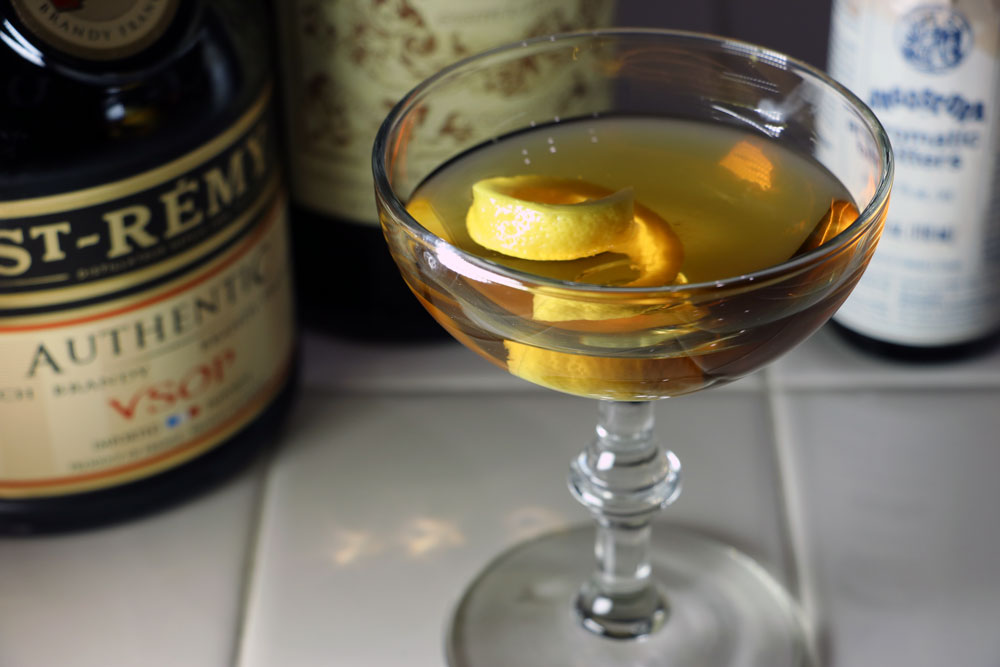 There isn’t anything earth shattering about today’s Mr. Boston’s cocktail recipe other than it earned a name as “the” Brandy Cocktail. That has to count for something, right?

Fearing I wouldn’t have much to talk about with this drink, I spent my afternoon carefully entering all the Tales of the Cocktail events into my Outlook calendar. I’m 4 hours in and still need to put in the events for Friday, and Saturday. I have a feeling this is going to be an intense week of booze!

We arrive in New Orleans a day before Tales kicks off on the 18th of July with the first event starting at 7:30 am. Nothing like breakfast and Whiskey to start the day I say 🙂

In between checking out the newest trends in the cocktail world, there is an extensive list of alcohol themed seminars, tasting rooms, pool parties, music events and tours to attend. I’m so glad I decided to plan in advance so that we don’t miss anything we’re dying to see. Of the six day extravaganza, Wednesday through Saturday are absolutely packed full of fun. My check liver light is almost certain to be on by the time Sunday comes along.

I’m so excited to have the opportunity to attend this year’s event as a part of the media. I love that in addition to sharing my Mr. Boston’s recipes on the road, I’ll be able to share the excitement of this crazy cocktail event with all of you.

A couple weeks back I tried to “schedule” my cocktail recipes in the hopes of nailing down which recipes would be up during our New Orleans adventure. The town is notorious for historical drinking, and I know I’ll have a lot of famous haunts to check out for help with the recipes I seek. It’s all a matter of which bars will fit best with the drink at hand.

I’m already three days behind schedule. Tonight’s Brandy Cocktail should have made it’s appearance on Thursday. But since this series is going to be a multi-year event, I decided to give each recipe special treatment rather than rush through the process. There are hundreds of recipe sites and I’m hoping this one will be more than a list of ingredients and boring info pasted from Wikipedia. I’m not 100% certain I’ve reached my goal every day but I’m trying.

If I maintain a drink a day schedule until Tails of the Cocktail, the Brown Cocktail should be our first experiment from the Bjiou. The following day would be the Brunelle which, given it’s Absinthe ingredient, seems perfect for Jean Lafitte’s Old Absinthe House. We’ll also need to find a place to try out the: Bucks Fizz, Bulldog, Bull-Dog Highball, Button-Hook and B.V.D. Cocktails. Since I won’t be able to bring our home bar with us, I need to figure out where we’ll be drinking down South. I have my work cut out for me!

I’m so excited to check out this 210 year old Absinthe bar!

But enough of that, you’re here to read about the Brandy Cocktail and so you shall!

The Brandy Cocktail is as basic as it’s name. A combination of 1 Jigger Brandy, 1 Dash Italian Vermouth, 2 drops of Bitters and a twist of lemon peel, the drink doesn’t appear to have any mysteries to solve. I discovered a couple other Brandy Cocktail titled recipes in George J. Kappeler’s 1906 ‘Modern American Drinks.’ Three in fact!

Like Mr. Boston’s, the 1906 Brandy Cocktail is a mixture of Brandy, and bitters. Peyschaud or Angostura are noted by name. Rather than sweet Vermouth, the older cocktail version asks for 2 dashes of gum syrup and adds a maraschino cherry to the lemon peel garnish.

The Fancy Brandy Cocktail swaps gum syrup for maraschino plus a dash of orange bitters. The rim on this fancier version is frosted with powdered sugar but they seem to have removed the cherry and lemon peel.

Finally, the third Brandy Cocktail, titled the Old-Fashioned, is as it suggests… An Old Fashioned Cocktail made with Brandy. That is a rather novel idea. I now must try this out with our Old Fashioned Infusion Spices. I’m excited to see how that a Brandy infusion would turn out!

For the purposes of tonight’s drinking, I decided to try out Mr. Boston’s version along side George’s Fancy Brandy Cocktail. Sunday demands to end fancily after-all 🙂

Fill a mixing-glass half-full fine ice; add three dashes maraschino, two dashes Peyschaud or Angostura bitters, one jigger brandy, one dash orange bitters. Mix. Strain into fancy cocktail-glass, the rim of which has been moistened with a piece of lemon and dipped in powdered sugar, which gives it the appearance of being frosted.

Both Brandy Cocktails were prepared using St. Remy VSOP. For the Mr. Boston’s we added Antica Formula Italian Bitters and 2 drops of Angostura.

On the older 1906 recipe, I decided to switch up the bitters and use the Peyschaud’s and 2 dashes of Angostura Orange Bitters.

Once again I forgot to grab that darn powdered sugar! I wasn’t going to rim the glass of our second round but decided to use regular granulated sugar to try and stay accurate.

Ryan crafted me a perfect lemon peel for the Mr. Boston’s photo and by the time I was able to give the drink a taste, the lemon had left a nice essence in the warming Brandy. Very tasty!

Between the two versions, I preferred the 1935 recipe. Ryan seemed to enjoy the older version and both of us retired to the couch happy campers. For me, the 06 was too bitter. After giving it a try I understand the sugar rim. Using the Peyschaud’s altered the color from a warm brown to a pink which was pretty with the sprinkling sugar rim.

While I had hoped to get this Sunday’s post out into the world earlier, it seems that the weekend is becoming synonymous with late blogging. Hopefully it will be enjoyed by someone looking to escape their Monday blues.