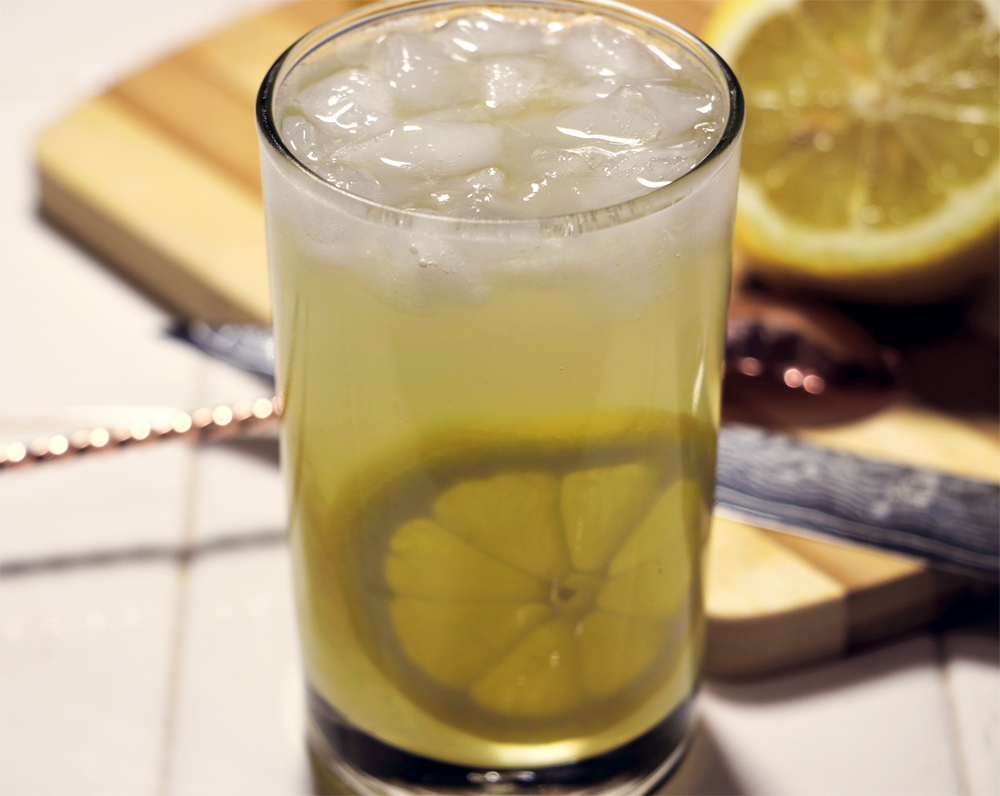 All these years I assumed the Tom Collins cocktail was named after a person. Turns out it was all a hoax!

Two years before the cocktail Collins was published in Jerry Thomas’ 1876 book, men throughout the U.S. were in search of the man who had been talking smack about them at the local bar. No one had ever seen Tom Collins (they didn’t realize he wasn’t real,) yet the rumors involving a man named Collins badmouthing fellow bar patrons made the news in 1874.

“Frantic young men rushed wildly through the streets of the city on Saturday hunting the libelous Tom Collins.”

The story goes like this: someone would rile up their friend by ratting out Tom Collins for saying rude things about them. The offended party would seek out Collins at the bar he was last seen causing trouble. When they asked the bartender for Tom Collins; a cold, sour cocktail would then be presented.

Seems, once the ruse was exposed, everyone got in on the laughs.

Whether this hoax started as a mere prank or was a masterful publicity stunt is unclear. If it was the latter, I’m in love with the idea… it’s simply brilliant! Talk about going viral 🙂

Roughly a decade before the hoax, there lived a man named John Collins who headed the Limmer’s Old House on Conduit Street in Mayfair, London.

I was’t able to locate any photos or illustrations of Limmer’s Old House but it could have looked a lot like this rendition of the Claridge Hotel.

While tending bar at the trendy London hotel, John Collins crafted a recipe that is nearly identical to what we now call the Tom Collins. Some believe it was the use of Old Tom Gin in John’s recipe which spur the name swap.

Though Jerry Thomas brought the Tom Collins cocktail to the masses; in 1891 an English physician named Sir Morell Mackenzie, wrote an article for the Fortnightly Review proclaiming John Collins was the original creator. This caused even more bustle for the cocktail and I can only imagine helped further the drinks popularity.

At the time of the hoax, a Collins could contain a number of different spirits. Jerry’s Tom Collins recipes included a Brandy, Gin and Whiskey version. Which brings me to today’s Mr. Boston drink… the Brandy Collins.

By the time Jacques Straub’s ‘Drinks’ was published in 1914, the Tom Collins strictly called for Gin. Beneath the “Tom” recipe is listed the recipes for the John Collins (using Holland Gin), the Brandy Collins, Bourbon Collins, Rye Collins, Scotch Collins, Irish Collins and Rum Collins.

At their core, according the Jacques, all Collins drinks were to be comprised of:

Leo Cotton stayed true to this ingredient formula. That is except… the Brandy choice should be Apricot, naturally!

Whilst on my straw hunt, I was unable to locate a proper 10 ounce Collins glass despite my best efforts. Given the amount of Collins’ I’ll be enjoying later on in the book, I’d best turn to the internet to find that which I seek.

I was hoping for something older than the 1960’s but these are really lovely glasses. I might have to have them 🙂

My trusty 6 ounce Delmonico did the trick in a pinch. My only quandary is whether the sweetened lemon juice was too strong because the glass lacked the height needed for additional sparkling soda water. Maybe I should try this one again using 3 parts spirits, 2 parts lemon, 1 part sugar and 6 parts water and see if that tames it down a touch.

I try to stir clear of too much citrus juice these days but for some reason, I really enjoyed the Brandy Collins. Ryan found it to be way too tart for him, so I was able to horde the refreshing, lemony goodness for myself! I think part of the reason I fancied the Brandy Collins (aside for the cooling it provided the 80 degree house) was the fruitiness of the Apricot. Even though the Serbian Apricot Brandy we’ve been using isn’t sweet on it’s own, it mimics ripe fruit when paired with sweetener. I’m not sure I would have liked it as much using the St. Remy VSOP. The Cognac like notes from might loose some of that summer lemonade quality that was so nice.

All I can say is, I’m so happy the last few drinks were on the cool spectrum. It is literally hot as hell in Las Vegas today. That 118 degree air feels like a blast furnace! Ice cold, refreshing cocktails are the only way to ride out the heat wave. Thank you Mr. Boston’s!