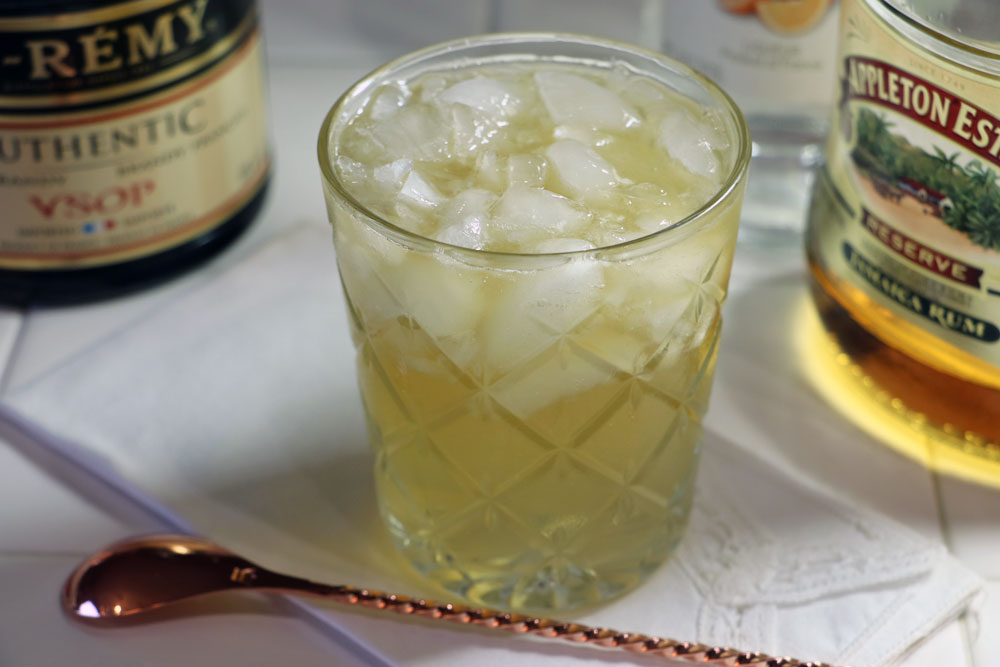 The Brandy continues to flow… umm, maybe that should be more like flood.

We are entering day six of this spirit with no end in sight. Over the next 17 days (that’s right nearly a month long Brandy feast!) Ryan and I will be drinking our way through: Daisy’s, Egg Nogg, Fix, Fizz, Flip, Gump’s, Highball’s, Julep’s, Punches, Smashes, Sours’ and Toddy’s. When I put it that way, it sounds like the Olympics of cocktails!

All I can say is thank God Brandy is enjoyable. Imagine if we hated the stuff. That would be horrible!

So far, the Brandy imbibing has been anything but horrible. Hopefully it will stay that way.

It appears that a proper Daisy cocktail should include the following: lemon juice, syrup and soda water. As far as the spirits go; Brandy, Gin, Rum and Whiskey all appear to be appropriate.

Leo Cotton nearly fooled me into thinking that Grenadine was the only syrup used in a Daisy. All four Daisy recipes involve the red syrup. Thankfully I was wise enough to consult Jerry Thomas before starting in on this post. If I hadn’t I fear my perception of the drink would have been different.

While Mr. Boston’s Brandy Daisy has a more simplistic list of ingredients, it shows in the final cocktail. After looking over Jerry’s more complex drink, I opted to try his rendition first.

I think it was the Jamaican Rum that caught my eye, or was it the Curacao? Either way, rather than plain old Grenadine, the first Daisy I prepared featured an entirely different palette of flavors from Mr. Boston’s recipe. Over this last week of Brandy drinks, I’ve really enjoyed the use of Orange liqueur. It , really compliments the Brandy, especially when lemon is also involved.

Mr. Thomas wasn’t really clear on his measurements (I have no idea what a small wine glass of Brandy is in ounces) so I decided to use Mr. B’s units and the ingredients from ‘The Bar-Tender’s Guide’ for a Frankensteinesque cocktail blend.

Here’s what I mixed up:

I think I added a wee too much Xanthum Gum, Ryan was able to smooth out all the lumps for me 😉

The end result was really refreshing. I admit, I wasn’t sure I was going to like it prior to adding the ice and sparkling water. It seemed overly tart but, once the bubbles went in I rather fancied this one.

The Brandy Daisy even worked well with the Chicken Nachos I prepared for dinner. Usually I grab a beer for Mexican cuisine but I don’t know, the Brandy Daisy was pretty nice.

Wanting to stay true to the task at hand, I mixed up the Mr. Boston’s recipe after dinner. The color was nice but it wasn’t as good of a recipe. The Brandy peaked through the lemon juice but none of the sweetness came through. I didn’t care for the second round. It was drinkable but not great. I’m so glad I took a couple seconds to look into the older book. If I hadn’t the Daisy would have fallen down the list.