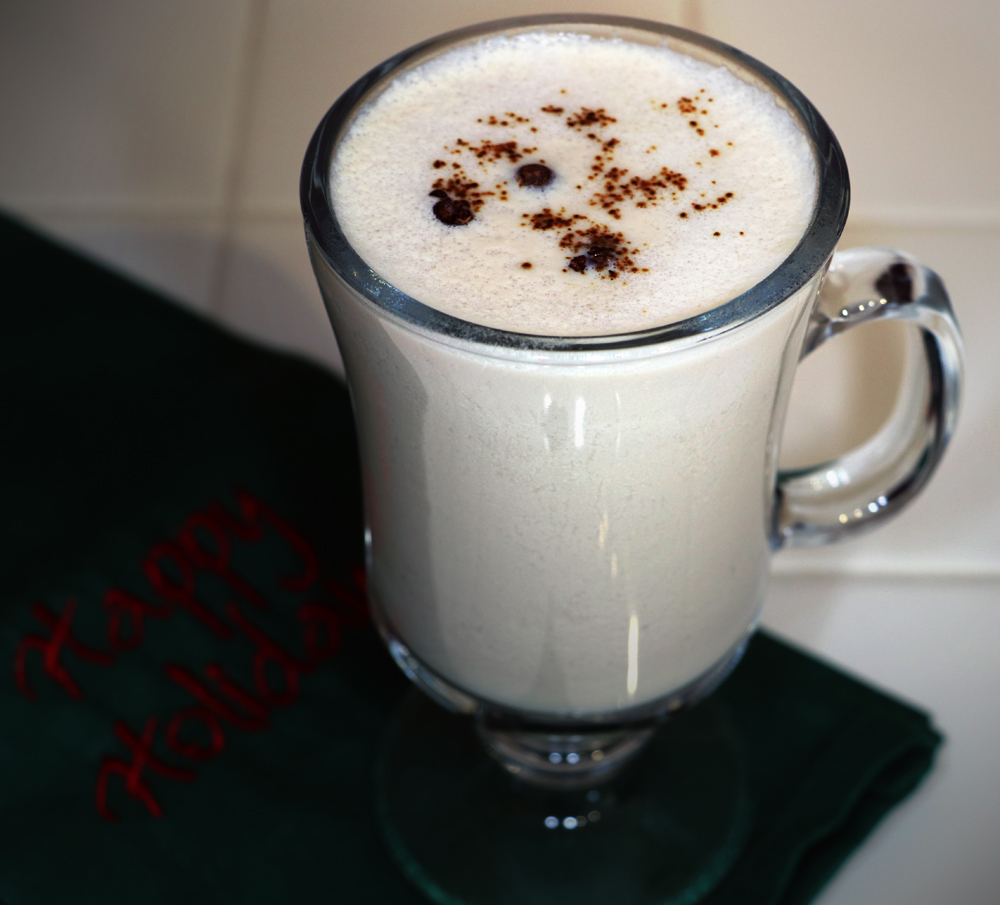 Eggnog in June is different to be sure. Certainly not the usual Summertime refreshment choice. But when duty calls, one must mix up some raw eggs, milk and Brandy for the cause!

Brandy has been a nogg staple for sometime. Our first president, George Washington, loved eggnog so much he wrote down his own recipe for prosperity!

I think that ol’ George really liked booze, check out this recipe. It conveniently neglects to note the amount of eggs for which Time Magazine guesstimated to be roughly a dozen.

This recipe is closer to the Baltimore recipe but supersized to serve 8 – 10 people. Oh my! I shutter to think how many calories that bad boy has per serving!

Not being a huge lover of the nogg, I was curious how this traditional holiday drink got its start…

Those I know who do partake in the annual tradition generally enjoy the drink chilled. This seems strange to me since the holidays are only balmy when celebrated near the equator. We even wear sweaters down here in the desert and that’s saying something since it’s currently 111 outside and rising.

Despite the heat outside I was curious how a warm Brandy Egg Nogg would work. Would the egg cook and turn into a scrambled mess? Do you froth the milk? I decided to employ our espresso machine in making today’s cocktail.

The idea to steam the drink came from two different sources. Firstly, the ever popular Starbuck Eggnog Latte. The second source of inspiration is funny. At least I think it’s funny.

NPR ran a piece on how to “Eat Like A Golden Girl”. Apparently the actress who played Blanche Devereaux (Rue McClanahan) splurged on a cappuccino machine after hitting the big time. After a night of hard drinking, Rue didn’t feel like cooking breakfast. Instead, she threw her eggs into the milk steamer and fluffed them into a souffle’ style breakfast treat. I loved this story so much I knew I had to try it out.

Using a fork to mix the ingredients together, I turned on the steam function of our Jura Capresso espresso machine and let the wand take it from there.

The hot mist frothed the drink nicely and brought the temperature up to 130° F.

Yep, the egg cooked itself into a ball. I do think some of the egg was left in the drink though. It appeared that about 1/2 was too gross looking to consume.

Thankfully, the goof wasn’t too hard to fix. The fine mesh strainer did the trick but it was so thick, Ryan needed to use a fork to help separate the liquids from the solids.

On the plus side, we didn’t need to worry as much about Salmonella poisoning with this hot eggnog (the spelling of the word eggnog seems to have evolved over the years, Mr. Boston’s spells it egg nogg) recipe. The egg clump really turned Ryan off of the drink, neither of us were brave enough to try the cooked piece despite it possibly containing Brandy. Although I don’t really like eggs in general, I rather enjoyed this hot version. It reminded me of a less sweet hot buttered Rum. As the cup cooled, it wasn’t great though. The egginess was a bit much. Ryan preferred the chilled verison, but I think I could go for this one again come November. Though maybe I won’t steam the egg next time 🙂