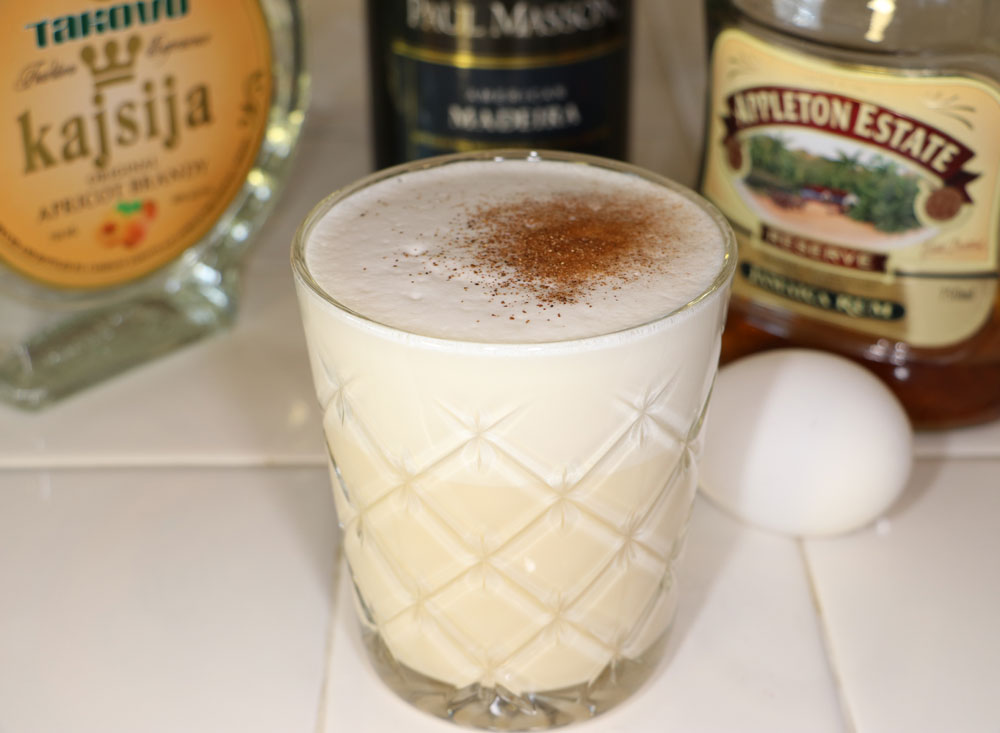 While the first two “B” titled recipes in Mr. Boston’s 1935 Bartender’s Guide were a bit underwhelming, the section redeemed itself with two Baltimore inspired delights.

Both the Baltimore Bracer and Baltimore Egg Nog called for, you guessed it… raw eggs.

As I’ve mentioned before, I’m still trying to get past my fear of ingesting raw, unhatched poultry, and so far, neither Ryan or I have gotten sick from the recipes we’ve tried that call for this ingredient. Although, as I write this, I’m wondering if the Baltimore experiment contributed to the sour tummies we both have this morning…. humm. Oh well, not going to let a little bellyaching throw a wrench in the works.

Up first was the Baltimore Bracer. For those of you like me who hadn’t heard the term bracer before, apparently it is an alcoholic drink given to someone in preparation of bad news. After tasting this delicious mixture of Anisette and Apricot Brandy, I might demand this drink every time someone asks the ominous, “do you want the good news or bad news first,” question 🙂

Back home, we had Sambuca, Absinthe and Ouzo but no Anisette. I assumed that like the aforementioned Anise flavored spirits, Anisette would taste of strongly infused Star Pod Anise and simple syrup. After a little research, we decided to go with Meletti’s Anisette which received good reviews. The bottle was opened straight as we walked in the door and to my surprise, Meletti’s Anisette was not exactly what I had come to expect… in a very good way.

Ouzo is probably the most astringent of the group, and even the “real stuff” Ryan and I enjoyed in Corfu, Greece burned going down. The plate being broken on our head before hand did little to distract from the burn. Like our cat by the same name, Sambuca is a sweeter version of Ouzo with a unexpected bite. Absinthe is a totally different animal all together due to the addition of loads of exotic herbs which play nicely with the Anise.

Licorice lovers like us can attest to the taste bud wrecking which takes place after enjoying a handful of black jelly beans. Sambuca and Ouzo tend to have this affect but strangely, the Anisette did not. It was the oddest experience. The drink is smooth, did not burn, and though the strong Anise flavor was very present, I experienced no taste bud distortion. Very nice indeed!

The mixture of Anise and Apricot sounded a little different so I took a quick sample taste before adding the egg white to the shaker. OMG, that was out of this world amazing! The sweet Anisette enhanced the fruit notes of the Apricot and the two created a magical combination. Probably the best cocktail of the book so far!

After giving the shaker a good dry shake followed by another shaking over ice, the final drink had a lovely bright white foam that gently contrasted with the cream colored liquor below. Like the Bachelor’s Bait Cocktail, the foam sucked up some of the flavor from the two spirits only this time, it didn’t greedily take away the sweetness of the drink. This one gets four thumbs way up!

The next drink, The Baltimore Egg Nog, has a long list of ingredients. We had the Rum, and Apricot Brandy but we still needed a bottle of Madeira Wine. We picked that up along with the Anisette. Feeling cheap, we opted for Paul Masson’s brand as $40 – $100 seemed excessive for a mixer. At a little over $5, this Madeira had decent reviews so we thought, why not?

Never having Madeira, I gave the bottle a taste before setting off to making the next cocktail. It is sweet, as to be expected in a dessert wine, but moreover it has an oddness akin to the Sherry we purchased several drinks back. I discovered that the similarity is likely because Madeira is crafted using a method much like Sherry. Both use cask barrel-aging and the addition of French Brandy to fortify the wine.

For sipping, I wasn’t a fan personally, but it did work quite well in the Baltimore Egg Nog.

Just as I had rounded up all the ingredients and prepared to get the drink mixed I realized that the recipe required fresh milk. We only had cream in the house so down the hill to the market I went to pick up the missing milk. After getting the dairy and making my way home another missing ingredient appeared, white sugar… DARN IT!

Thankfully Ryan needed something at work so down the hill we went once more to get his supplies and my missing sugar. An hour later I was ready to get the Baltimore Egg Nog going.

Unlike those raw egg white recipes before it, the Egg Nog calls for a whole raw egg, yolk and all. I figure that the high proof spirits will kill any bacteria… right?

In mixing the recipe, I questioned the ratio of ingredients in proportion to the 10 ounce serving glass noted. Four Jiggers of milk (6 ounces) sounded like a lot to use but I decided to stick with today’s measurement standards and gave it a go.

Remember when I mentioned that warm liquid can create a shaker volcano? Well, apparently so can chilled milk / egg drinks 🙂 Poor Ryan got quite the surprise when he went to strain the drink into it’s 10 ounce glass. Not to mention my early hunch was right and after shaking the portions made 15 ounces or more 🙁

Not one to cry over spilled milk, the show went on and we were able to clean up the mess and grab a few lovely photos of this holiday masterpiece (the featured image at the top of the page).

Admittedly, I don’t enjoy Egg Nog during the holidays. Ryan does however enjoy the drink from time to time so I asked him what he thought the taste differences were. He didn’t have any answer for me as December was five months ago.

While I can’t get past the smell of store bought Nog, the Baltimore Egg Nog was very good. I didn’t even mind that there was a full raw egg in the mix. The Rum, Wine, and Apricot Brandy combination was perfection. In fact, I will likely be making more of these during the upcoming Winter months rather than buying the boxed version for my Nog loving relatives. Double win for Baltimore!