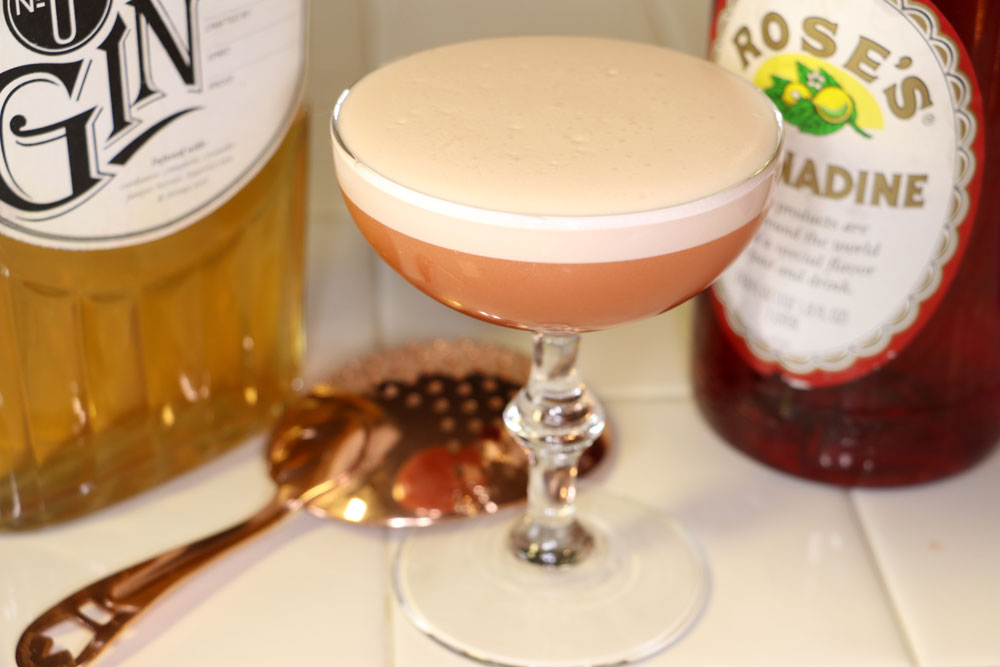 I was more intrigued by the name for the next Mr. Boston’s recipe than the ingredients. There is something a little nefarious about the title, Bachelor’s Bait.

Was the drink intended to help capture a bachelor or was it a way for bachelor’s to attract a mate?

At first it made the most sense to me that the later may be true. Looking at the ingredients of: Gin, Orange Bitters, Grenadine and egg white, I assumed it was too feminine a drink for a man looking to attract a date. Once we mixed it up the two toned pink cocktail looked even less manly for the antiquated social convention of the 1930’s.

I did a little digging on the subject and came up with one possible explanation. In 1934, a year prior to the printing of my copy of Mr. Boston’s, a movie entitled Bachelor’s Bait was released. Directed by George Steven’s, Bachelor Bait is said to be a story of a former Marriage License clerk who is fired from his post but decides to open his own match making business. He ultimately falls in love with his secretary after unsuccessfully chasing his clients around first.

I don’t know about you, but that description hardly cleared up my question about the meaning of the drink. All I can assume is that the Bachelor Bait movie had inspired the drink. Perhaps it was a publicity stunt?

On the heels of the very tart Bacardi Cocktail, I decided to mix up two 1/2 sized Bachelor Cocktails sans egg white to compare natural Grenadine to Rose’s artificial version.

While both were pleasant, Ryan and I both agreed the Rose’s was the better choice for this drink. The natural Grenadine didn’t have enough oomph to compete and blend with the 3 dashes of Angostura. It was nice to taste but a bit heavily bittered.

The other difference was the color. Rose’s red dyed syrup gave the finished drink a nice rosy tint while the naturally brown hue of the uncolored Pomegranate juice let all the orange coloring from the bitters take over

After making our selection, I mixed the drink according to the recipe using a jigger of our home brewed Gin, and 3 equal dashes Grenadine to Angostura. Using the dry method of shaking, I added the white of an egg, and our fun mixing ball to the shaker and got to work. Without the ice to cool the mix, pressure builds in the shaker. I could feel the warm liquid trying to explode a couple of times during the initial 30 seconds of shaking I gave it.

I tried in vein to add the ice and complete the final shaking needed to get a nice foam. But after straining my efforts into the 3 ounce cocktail glass, my foam was not nearly the masterpiece Ryan manages. Though I was proud of what foam I had accomplished, Ryan offered to re-shake the drink and sure enough my measly foam paled by comparison 🙁

I tried but Ryan’s foam (pictured at the top of the page) kicked my foams butt.

Taste wise, I enjoyed the Bachelor’s Bait more before the egg white. The once full flavor profile is muddied by the foam. In fact, I found the foam greedily sucked up some of the flavor and while it was pleasant all of the sweetness faded away. On a scale of 1 to 10 I’d give this cocktail a 5 for taste but a 10 on presentation. Once Ryan improved my flat foam, this was one sexy drink.

Today we need to run back over to Total Wine to pick up some missing pieces for the next round of drinks. When next we meet I’ll share the Baltimore Bracer – Happy Sunday!