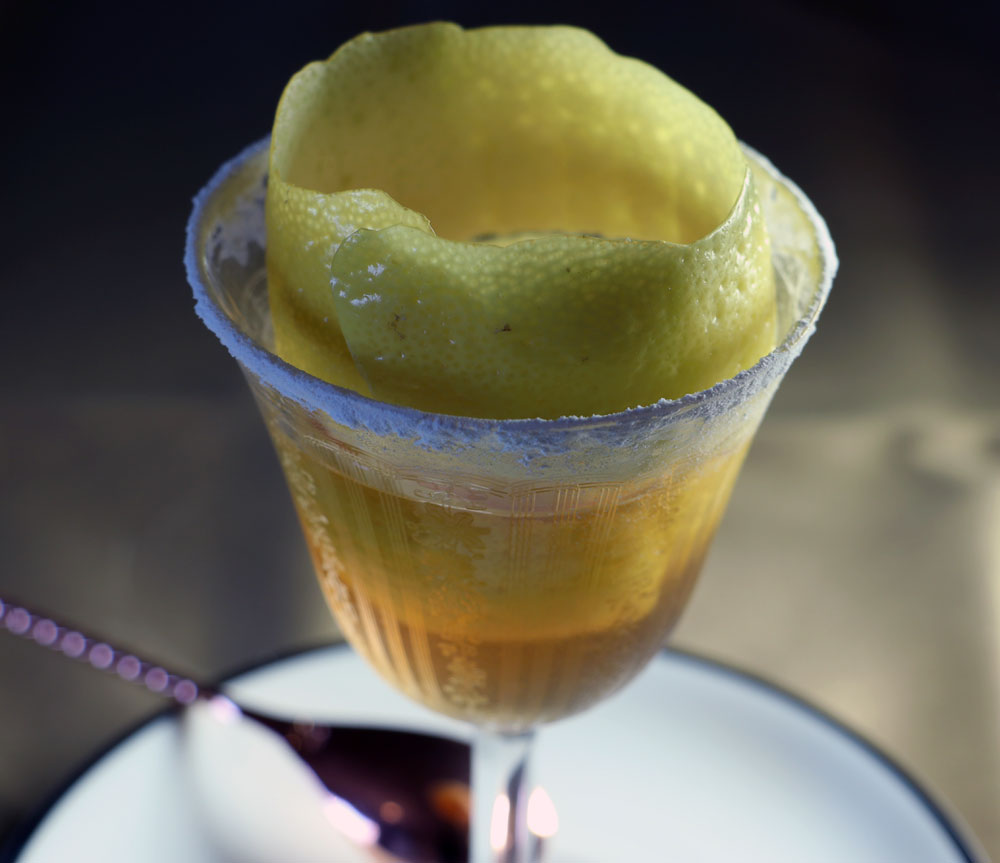 Maybe it’s the heat, but for some reason I’m having trouble sitting down to write today. It’s funny since my brain tries constructing my posts just as I’m about to fall asleep at night. After hours of tossing and turning trying to shut down the noise in my head, I wake up and have forgotten what it is I wanted to say 🙁

Hopefully as I start, the words will flow forth easily – Oh, writer troubles… Perhaps this is why we drink!

Mr. Boston’s Brandy Crusta Cocktail is notably similar to George Kappeler’s ‘Modern American Drinks’ Fancy Brandy cocktail recipe. Both call for Brandy, Maraschino and bitters but rather than the orange bitters called for in the Fancy Brandy, today’s Brandy Crusta employs Curacao (for the orange) and lemon juice (for a touch of tart).

It was the sugar rimmed “frosted” glass which first alerted me to the similarity between the Brandy Crusta and Fancy Brandy recipes. Up until the latter, I hadn’t run across a rimmed cocktail recipe yet during this series which called for the glass to be decorated this way. It is one of the main reasons the Fancy Brandy caught my eye during the Brandy Cocktail experiment a couple nights ago.

Before diving into the 1935 recipe, I sought wisdom of the web. It’s a good thing I did too, Leo Cotton had seriously downplayed the preparation of this drink. If I’d stuck to the script, I may have missed out on the challenge of peeling a lemon in a perfect spiral like an apple!

It is said that the Brandy Crusta cocktail originated in New Orleans during the 1850’s. There is some debate as to whether or not the drink founded the sours category of cocktails with some drink historians calling it the grandfather of the Sidecar. Personally, I think grandmother to be a more appropriate relation – but maybe Brandy was a mans name at some point in time? 🙂

As you may have gathered from the name, Crusta was intended to describe the sugar crusted rim of the glass. To read Mr. Boston’s recipe, you’d think the name association ended there. Alas, in comes Jerry Thomas to add his special layer of complexity to what appears to be a relatively basic drink.

Jerry’s Brandy Crusta recipe offers an illustration of the drink to provide clarity of the presentation goal. If that doesn’t say something about the complexity of this cocktails appearance, I don’t know what does. Even the Blue Blazer doesn’t get that treatment within the recipe description! In fact, after a quick flip through the entire 152 page book, I only found one other drink that has an illustration associated with it’s preparation.

That strange domed shape peeking above the glass is a lemon peel. It’s hard to tell in black and white but having witness some recreations online I’m fairly sure that is the case. Now trying to describe the way the lemon is supposed to appear, I understand why a drawing was necessary. It isn’t the type of garnish I’m used to seeing!

Not to sound like a wimp, but I really don’t care for cutlery. I have a bit of a knife phobia. Ryan on the other hand grew up around knives during his days as an Eagle Scout. One may say he is an enthusiast. Opposites really do attract 🙂

The reason I bring this up is… the Brandy Crusta requires someone who has experience with knives. No one likes cutting off their finger! In addition to being skilled, you must has some patience and not be afraid of sharp objects. This means I did not qualify for the task. Thankfully, Ryan handles our garnishing needs and was reluctantly up for the challenge. I only say reluctantly because, like me, he was hot and tired.

Aunt Pat’s heirloom stemware was made for the Brandy Crusta Cocktail!

I finally remembered the powdered sugar (YAY!) But I didn’t remember to order the Boker’s Bitters I wanted back in May (BOO!) Being an orange forward cocktail, I decided Angostura would do. While Mr. Boston downgraded the fancy wine glass to an Old Fashioned style, I stayed traditional and broke out a beautiful piece of stemware my aunt entrusted me with.

We only had a small lemon left in the fridge so we stopped off at the store to grab something larger for the task. Like a pro, Ryan masterfully skinned his unsuspecting fruit victim without trouble on the first try!

I’ve never tried frosting a glass with powdered sugar before. It was a little tricky to get the right consistency around the mouth without clumps or dusting the glass with powder. I tried blowing the excess off. Ryan thought that was a bad idea.

Mr. Boston’s recipe ups the Curacao for 2 dashes to 1/3 oz. I think that was a brilliant call. The forth coming cocktail was delicious!

Trying to drink this fancy cocktail was a challenge. The lemon peel tries to go up your nose or your sipping through the side of your mouth. I can only imagine how silly those 19th century gentleman looked trying to enjoy this cocktail with those massive curled mustaches – LOL.

After all the care that goes into the preparation of the Brandy Crusta, it is a shame the drink is gone so quickly. I think an encore performance is in order! Cheers!