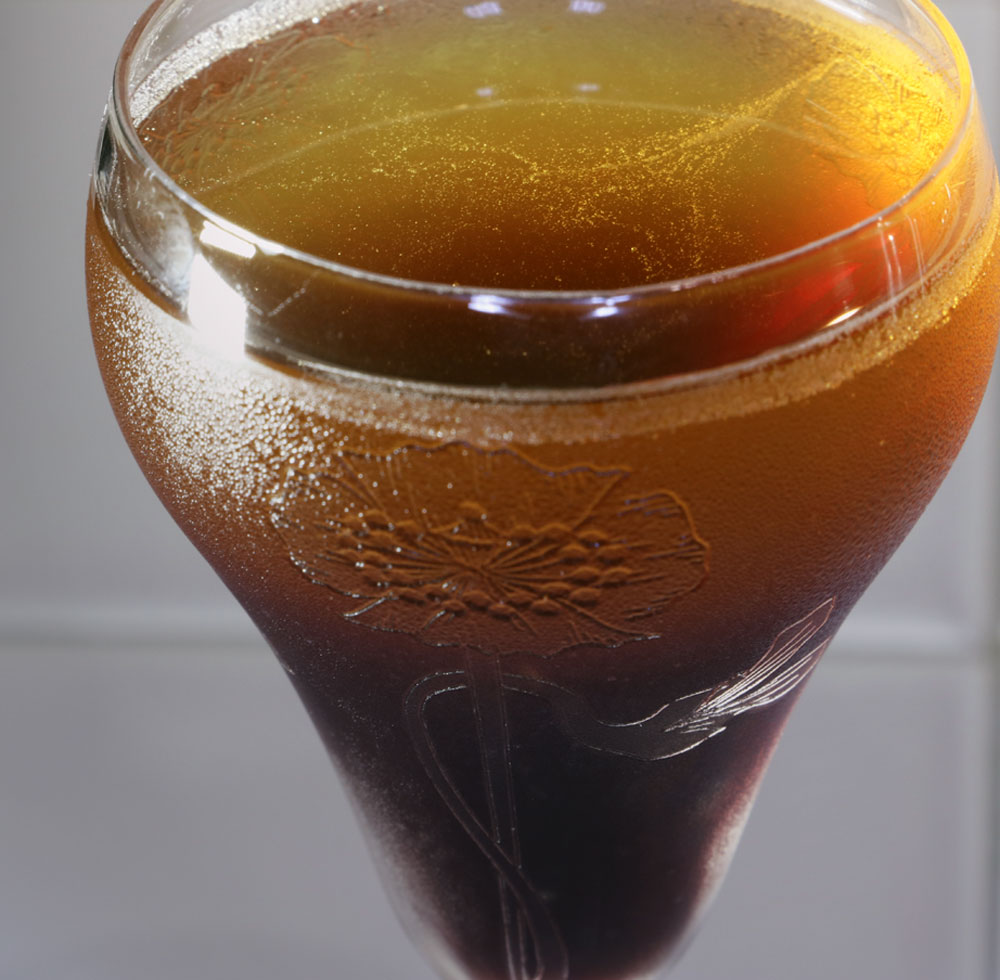 Does spending an hour dusting off and organizing the booze shelf mean I have a problem? Or maybe it means I need to speed up my drinking!

My mom is on her way down from Portland, Oregon today. Generally, I like to use visitors as an excuse to tidy things up but man am I tired!!! My Spring cleaning came a couple months late and now I’m paying for my lackadaisical behavior.

Thankfully it’s Saturday and I can split my time between laundry, dishes and drinking today’s cocktail from Mr. Boston’s 1935 recipe… the Brandy Sangaree.

The mixture of Brandy, sugar and Port is unlike any Sangria I’ve ever known. Peaking my interest, I looked to the internet for guidance. Were these two different drinks or one drink with two spellings?

The Difford Guide and may other dictionaries lump the Sangaree and Sangria together as one. But, according the Ted Haigh’s research the two are actually distinctly different Spanish cocktails.

Haigh has a great write up on the subject here. Apparently Sangria is relatively new compared to the Sangaree which has been around since at lease 1774. When the Sangria made it’s splash in the 1960’s the centuries old version fell through the cracks.

Ryan and I enjoyed a glass or three of Sangria in Barcelona. Part of the charm is the fruit steeped in a sweet red or white wine. It is a refreshing summer beverage that we continued to enjoy long after our return from Spain. Over the years we’ve tinkered with different wine bases, and different fruit. There are also some pre-made bottled Sangria’s that are worth a try.

Some Sangria recipes bulk up the drink with high proof spirits, but we’ve always stuck with a wine and fruit mixture. The Sangaree does not mention any fruit and the drink is heavier on the Brandy than on the wine.

Rather than breaking out the Apricot Brandy, this cocktail calls for the plain ol’ variety. I still have a cocktail or two left in the St. Remy VSOP bottle. Once that is gone, I’m planning on picking up something new to try out.

For Port, I was excited to play around with the Tobin James bottle we uncorked months back. It’s been patiently chilling out in the garage fridge since our American Beauty recipe back in April. I worried about the wine loosing character in the refrigerator. It turns out Tawny Port is meant to be used within 1-2 months of opening, OOOPS!

I wouldn’t consider myself a wine expert but I do appreciate the nuisances of the spirit. After learning about the delicate nature of open Port, I promptly gave it a quick taste.

The wine is still good! Unfortunately, it did loose the richness that drew me to it initially:-( I think Ryan and I will be forced to enjoy the entire bottle this evening – oh darn! Perhaps I should use the remaining Port for a Sangria and compare it to the Sangaree?!?!

While I’d usually indulge in a 6 – 8 ounce glass of Sangria, the Sangaree recipe from the 1930’s is teenie tiny. It is served in a 3 ounce cocktail glass and consists of 1 jigger of Brandy, 1/2 a teaspoon of sugar shaken over ice and strained then, a bar spoon float of Port is added on top.

The only problem with that last part, my Port sank like a stone to the bottom of the glass. On the bright side, it looked lovely!

I noticed that the drink was heavy on the Brandy in layers so, we used a spoon to blend the ingredients together after the photo shoot. The Brandy Sangaree is most certainly not a Sangria. Where a later is light and refreshing, the Sangaree is a serious, high proof cocktail. For such a small drink, this one packs a serious punch.