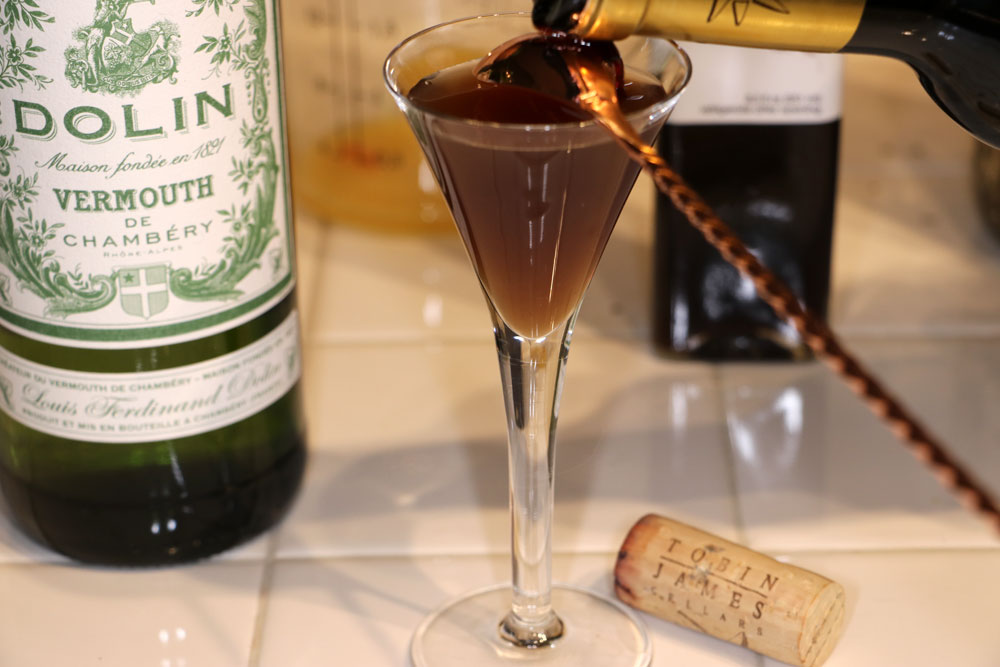 We tried to skip ahead to the American Beauty Cocktail a couple weeks ago but after mixing all the odds and ends I discovered the note for “a little Port Wine” at the very bottom of the description. That said, I had to practice patience and wait until we found some Port.

On our drive back from Morro Bay we found ourselves in the heart of Paso Robles wine country. Initially we’d set our sights on the area to merely sample the greatness that abounds along Highway 46. Having had the pleasure of checking out Eberle Winery and J. Lohr Vineyards on a prior trip, we decided to check out some new haunts.

Our first stop was Glunz Family Winery where we were greeted at the car by Jenga, a beautiful Bernese Mountain Dog. Not only was the wine selection spectacular, this was should a cool place with loads of historical nuances to love. If you are ever in the area and have the chance, check out their Syrah, Cabernet Sauvignon and Mission Angelica. All three are a must try!

Next up was Tobin James Cellars which boasts a 150 year old bar that is said to have entertained The James Gang back in Missouri. It is here, while leaning on a piece of American history that we were introduced to a 2011 bottle of James Gang Reserve Port. While most Ports I’ve experienced border being too syrupy, we found this bottle to be just the right balance. Having Port on my list of needs, I knew that this was going to be my missing puzzle piece.

Back at home I realized that we still haven’t nailed down a white Creme de Menthe. Despite the books lack of detail on the matter, after the disaster that was Alexander’s Sister Cocktail, I decided a white version would work best for the American Beauty.

I thought that finding a Creme de Menthe made from natural ingredients would be a no brainer. Afterall, Creme de Menthe is really only macerated mint and simple syrup at its core. Yet despite my best efforts, I could only find one Creme de Menthe produced by Tempus Fugit that boasts all natural ingredients. Among the sea of choices all the other bottles I found merely said “Natural Flavor” which I’ve found to be code for some weird chemical produced flavoring. While Tempus Fugit’s offering was tempting, I couldn’t bring myself to afford the $30 price tag especially since we have so many bottles yet to buy. More over, we are an herb company that specializes in flavoring alcohol naturally so I figured why not make some homemade Creme de Menthe instead.

Without giving too much away, Ryan and I have been developing a new product line which will involve Peppermint and Spearmint leaves. As luck has it, we received a fresh batch of herbs a couple weeks ago and those two items were among the bunch.

The ratio of 142 proof alcohol to mint leaves infused much faster than expected. The resulting liquid was a spectacular green color which defeated my goal for using a white Creme de Menthe but was very striking. After only three hours of infusion, both mint varietals released enough oil and chlorophyll that the once clear liquid was too dark to see through. It was then we both determined the infusion was complete. Why any distillery would need to use food dye to turn this spirit green boggles the mind but I suppose when you strip out the color through the still you need to replace the missing pieces.

The standard ABV for most commercial Creme de Menthe is around 50 proof. To bring our homemade version down from 142 we needed to combine 250 ml of simple syrup and 1/2 cup of the infused alcohol. The resulting spirit is so much better than the old bottle of green Creme de Menthe that has been on our liquor shelf. In fact, after trying our version along side the store bought Ryan needed to spit the sample taste out. You don’t notice how artificial something tastes until you try it next to the real thing!

At first blush, the American Beauty Cocktail has a strange mixture of ingredients. Marrying Apricot Brandy with herbal Vermouth, orange juice, mint and Port just sounded odd to us.  The total drink measures just over 1 ounce prior to the addition of the Port but notes straining into a 4 ounce glass.

As usual the books vague “top with a little” measurement for the Port is open to interpretation. Do you fill the remaining 3 ounces of the glass, add a bar spoon to the top or just pour willy-nilly until it looks good? The options seemed endless. Since the recipe notes a dash of Creme de Menthe and other recipes have plainly stated that one should fill up the glass with a remaining ingredient, we decided to wing it.

Debate ensued about whether to abide by the 4 ounce glass suggestion and whether or not this drink required chilling. While Ryan insisted that ice must be used, I argued that Port is a red wine and as such should be served at room temperature. After some back and forth my logic finally prevailed. As I write this I stopped by Mr. Boston’s website to see how this recipe has evolved since 1935. Not surprisingly the quantities have doubled. Apricot Brandy has been replaced with plain old Brandy, the recipe now clearly notes the use of White Creme de Menthe, 1 dash(es) of Port and as Ryan urged the new directions call for shaking over ice 🙂 After tasting our attempt, I’m sticking with my no chilling decision though I’m willing to give this new recipe a go sometime.

Wanting to adhere with our earlier commitment to authenticity, we decided to use freshly squeezed Orange Juice over store bought concentrate. While we had a bottle of Rose’s Grenadine stashed away in the refrigerator,  I was compelled to pick up a natural version so as to not taint our cocktail with corn syrup and chemicals. I figured we are already using nice ingredients, why ruin things now. We had success with Small Hand Foods Orgeat a while back and since their ingredients listing only sugar and Pomegranates, their Grenadine seemed to be the best fit.

After another trip to the Total Wine off Las Vegas Blvd. we made it home and got to mixing. As we started preparing our photo shoot Ryan insisted that a 4 ounce glass would be too big for the presentation and as such a 2 ounce Sherry glass was substituted. I think giving the decision to avoid chilling this was a smart move as the Port is a strong flavor and trying to fill the void in the glass would overpower the fruit in the cocktail. Perhaps the added ice melt would help bulk up the drink. We’ll give that a go and let you know what happens sometime.

The American Beauty Cocktail in all its glory. Check out those bands of color!

Sans ice the American Beauty was a very nice cocktail. The richness of the Port was mellowed by the orange juice, grenadine and apriocot brandy. Our homemade Creme de Menthe was barely noticeable and did not distract from the other ingredients. Without dilution this cocktail packs a punch without being overwhelming. It’s impressive to have such a tiny amount of liquid offer so much satisfaction. I think this one is a keeper.