The No Cocoa, Chocolate Cocktail 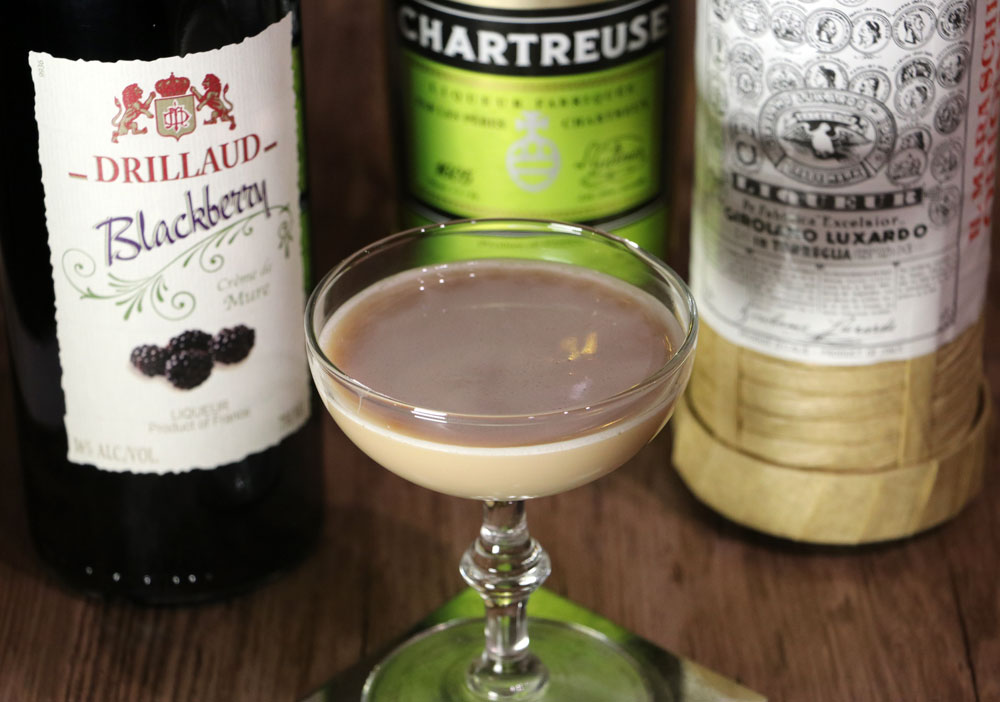 Given the difficulty to find a brandy distilled from Blackberries, I almost nixed the Mr. Boston’s recipe in favor of Harry Craddock’s Chocolate Cocktail. I’m really glad I didn’t.

Five years before Leo Cotton published the first Mr. Boston’s Bartenders Guide, Harry Craddock put out a Chocolate Cocktail recipe that included chocolate. Naturally, this seemed like the most logical recipe to use. But in order to stay faithful to my little blog series, I grabbed a bottle of Drillaud’s Blackberry liqueur and decided to give this very strange cocktail a go.

We spent so much today at Total Wine that we got a fancy Prohibition themed liquor box to carry all our goodies out with. The perks of overspending 🙂

Like the Apple Pie Cocktail towards the beginning of this series, Mr. Boston’s Chocolate Cocktail does not contain the main ingredient the drink is named for. I didn’t know how equal parts Maraschino Liqueur, Yellow Chartreuse and Blackberry Nectar would ever mimick chocolate but strangely, they did!

Unlike the majority of the cocktail recipes Leo Cotton published in 1935, the Chocolate Cocktail follows a much older recipe than that published in the Savoy book circa 1930. In looking through my growing list of vintage PDF cocktail books, I discovered the identical drink in Jacques Straub’s 1914 recipe book. Thankfully, Jacques Chocolate Cocktail specified that 1/3 was indeed 1/3 of a jigger (1.5 ounces) so that helped me craft the drink accordingly.

Before mixing things up I assumed that the Chocolate title must only be in reference to the color of the liquid once the egg yolk is thoroughly shaken in. I didn’t expect that the drink would in fact remind me of cocoa in texture and taste as well.

I followed the Chocolate Cocktail as published in 1914 and 1935. It consisted of:

As you can see by the main cocktail photo, the drink looks like hot milk chocolate when it is strained into the glass. There is a light foamy top and light brown body.

Of all the Chartreuse cocktail recipes we’ve tried thus far, both Ryan and I liked tonight’s recipe best. Seems the thick sweet Blackberry Liqueur did the best job at masking that pesky fishy Calamus Root flavor. As we have discovered, this is not an easy task.

I won’t go so far as to say this drink tastes exactly like milk chocolate because it doesn’t but, the richness of the egg yolk paired with the botanicals of the Chartreuse and the Blackberry does a remarkable job of simulating cocoa.

All in all, this was a surprisingly great cocktail, and I highly recommend it. If you’re not scared of raw egg yolk and looking for something new to try, check the Chocolate Cocktail from 1914 out sometime.