The Beadlestone and Beals Cocktails 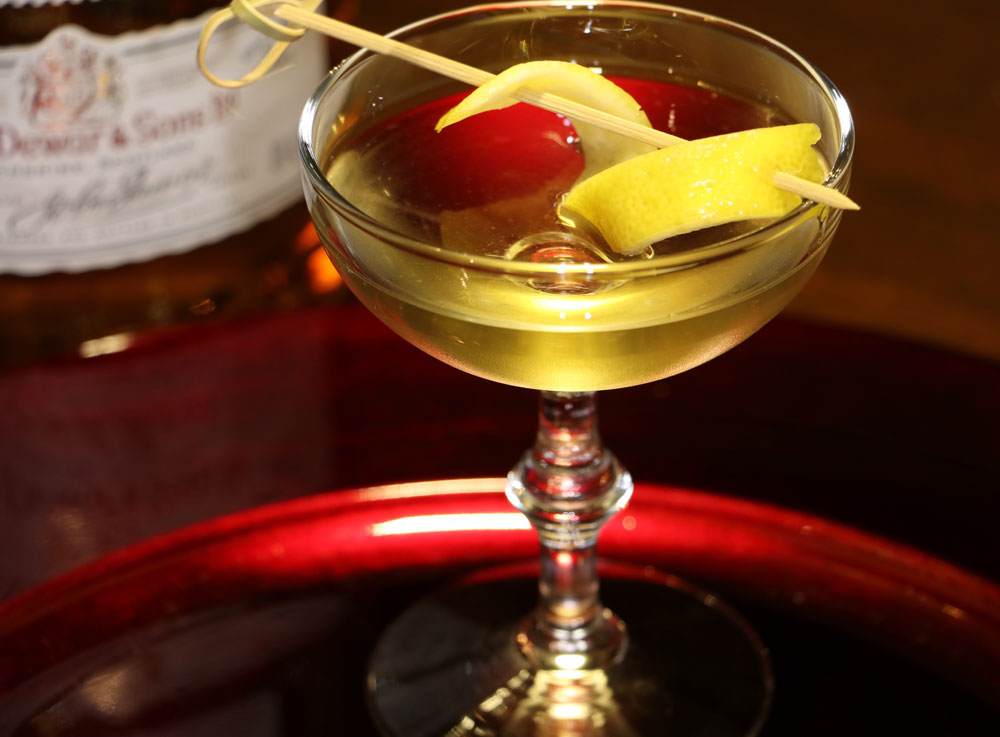 Oh Mr. Cotton… you tried to goof us up again!

I shouldn’t be surprised that Scotch had been replaced in last nights 1935 recipe with Old Mr. Boston Whiskey. The book was intended as a marketing tool after all.

I started the evening fully prepared to try the recommended equal parts French Vermouth and Whiskey cocktail with Bourbon. That was until I consulted the 1914 cocktail book, Drinks.

Other than an extra “e” in the spelling, the recipe(s) for the Beadleston Cocktail (or Beadlestone if you reference Drinks) call for the identical quantities of each spirit. Both also note that the drink requires French Vermouth. However, which whiskey to use is up for debate.

After realizing that the older recipe uses Scotch, I decided I’d do a little taste comparison.

In order to conserve our resources, each drink was prepared with 1/2 an ounce of Dolin’s Dry Vermouth and 1/2 an ounce of whisk{e}y. From the start, the color was the most notable difference.

The cocktail using Evan Williams barrel-aged Bourbon was a darker shade of caramel. The aroma of the Bourbon was also much stronger than the Scotch version and overpowered the Vermouth in the Mr. Boston’s recipe. To taste, both Ryan and I agreed that the Scotch was a better fit for this particular cocktail. Though we both enjoyed the Bourbon recipe, it wasn’t quite as smooth.

In doing some research about the drink, I discovered that the Beadlestone Cocktail (with the e) has taken the lead and all the recipes I found under that name use Scotch.

Mr. Boston’s website has both the Beadleston (Old Mr. Boston Whiskey recipe) and the Beadlestone (Scotch recipe) on their site. Apparently the “e” is now the key variance between the two 🙂

Just as I was about to conclude this the end of the Beadleston story, I stumbled onto a excerpt from The Waldorf Astoria Bar Book. The short paragraph I read, appears to shed some light on the origins of this cocktail.

In addition to mentioning that there are two Beadleston cocktail recipe variations, the clip appears to indicate that the drink was originally made using an “extinct Pennsylvania bonded rye, aged thirteen years”. The Beadleston No. 1 (or as the book refers to it, The Manhattan Junior) calls for equal parts whiskey and dry vermouth while the No. 2, is in the author’s opinion, akin to my beloved Rob Roy Cocktail.

Apparently, both Beadleston’s were named for a “local brewer who supplied the Old Bar with much of its beer.” Having not yet read the book, I don’t know what “Old Bar” means exactly but if I get sometime to stop and read the whole thing perhaps I’ll post an update on the subject.

With the Rye revelation in mind, I decided to mix up a final Beadleston trial. Replacing Scotch with Rittenhouse Rye, I thought the later being Bottled In Bond could mirror the Waldor Astoria Bar Book recipe. While the result was pleasant enough, it wasn’t great. If I had to put the trials in order my pick would be Scotch, Bourbon and Rye in last place. The 100 proof Rye was just too much and really made it a drink worthy of putting some hair on your chest! In other words, it was STRONG!

On the heels of the now, very confusing, Beadleston Cocktail, Ryan and I delve into Mr. Boston’s 1935 recipe for The Beals Cocktail.

Just like the Beadleston, the Beals Cocktail recipe also made its way into both the 1914 ‘Drinks’ book. Oddly enough, both recipes are absent from Hugo Ensslin’s 1917 ‘Recipes for Mixed Drinks’ book though it was only published 3 years later.

The Beals Cocktail varies from Beadleston’s French Vermouth / Whiskey formula in reducing the French Vermouth by 1/2 and introducing an equal 1/2 of Italian (sweet) Vermouth. Since a Rob Roy is Sweet Vermouth, Bitters and Scotch, I figured the Beals would be right up my alley… I don’t know about you, but I can’t pass up on Scotch and Vermouth!

I decided to prepare both drinks stirred over ice rather than follow the instruction to shake with cracked ice. I’ve found stirring works best in a Rob Roy to prevent over diluting the cocktail.

Adding 1/2 an ounce of Antica Formula Vermouth, 1/2 an ounce of Dolin’s Dry Vermouth and 1 ounce of Dewar’s Scotch, I stirred the mixer until the metal shaker had thoroughly chilled. After washing and drying our trusty 3 ounce cocktail glass, I strained the drink into the glass. Although the instructions don’t say so, I added a black cherry for presentation and a touch of sweetness.

There was something about the sweet and dry Vermouth mixture I didn’t really like. It wasn’t bad, just a little off. In search of a solution, I decided to remake the drink with Dolin’s Vermouth de Chambéry Rouge sweet Vermouth instead of the Antica Formula. The bitter Wormwood bite of the Antica disappeared but I’m not really a fan of Dolin’s sweet version. As a result, I don’t think my experiment worked 🙁

Despite my best efforts and high hopes, neither Beals Cocktail rang any bells for me.