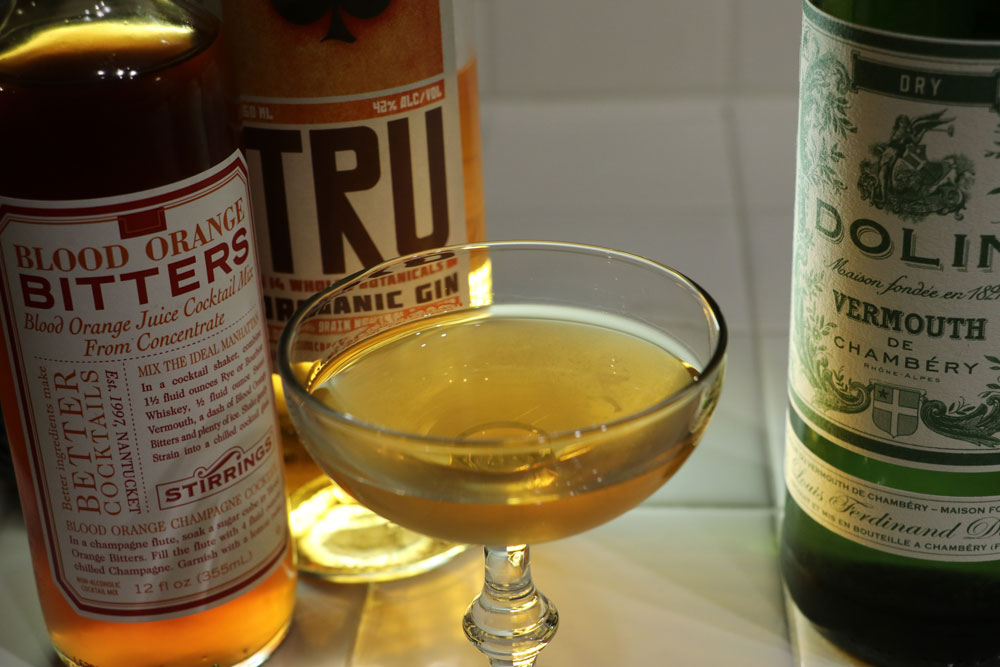 The day got away from me!

I had planned on sharing the next three Mr. Boston’s recipes today but taking advantage of the Memorial Day shopping specials kept us out and about all afternoon. Now at 9:30 PM I’m feeling guilty for not getting my homework done earlier 🙁 Oh well, it is a holiday weekend after-all. I figure this post may not even be read until Tuesday rolls around, which is A-OK.

Ryan and I stopped into a new place for lunch this afternoon. Not only is Bootlegger Bistro just up the street from where we were shopping, the theme holds a special place in our hearts. Over pasta and endless garlic bread, I decided to ask our waiter if the bar could make me today’s recipe, the Blood Bronx Cocktail.

The cocktail wasn’t on the menu, but since the restaurant offered another drink featuring the blood orange juice required, I thought I’d ask 🙂 I used our mobile to find Mr. Boston’s website and gave the waiter the list of ingredients. A few short minutes later, he arrived back with a classic martini style glass containing a lovely red/orange liquor.

The Blood Bronx Cocktail consists of standard fare: Gin, French Vermouth and Blood Orange Juice. Off the bat we both noticed the Gin (which per the recipe takes the lead in the drink). Unfortunately it wasn’t the best Gin ever. A bit tree like and in need of more distillation. Plainly put, it was rough.

While Ryan thought that Blood Oranges were supposed to be sweeter than other Orange varieties, the selection we brought home a couple months back was rather bitter. I noticed the same bitterness in the Blood Bronx we ordered.

All and all the Blood Bronx we received was not our fav. I don’t think the bartender was too blame at all but the ingredients were not quite right.

Out of curiosity, Ryan asked the bartender how she mixed the drink as we left the restaurant. The Gin was Beefeaters, which didn’t really surprise us as it isn’t the greatest Gin on the market. We both could tell this Gin was lacking.

The Vermouth she went with is one we haven’t yet tried called Cinzano Extra Dry. The Gin really took over the flavor palette of the drink so I’m not sure that we tasted any of the Vermouth to get a sense of it.

The bartender also used a Blood Orange puree but we can’t recall the brand. She mentioned adding a dash of sweet and sour plus a splash of triple sec.

I decided we should retry the cocktail back at the house to compare. Our Blood Orange was gone so we stopped into the grocery store to pick another up. They were out of season!!!! I made my way down to the juice aisle to see if there was anything else, but nope – we were totally out of luck.

The closest I could come was our bottle of Blood Orange Bitters from the Amer Picon experiment. The ingredients are water, sugar, Blood Orange juice from concentrate, Gentian and Citric Acid so I figured it would do in a pinch.

We were also all out of our homemade Gin so I mixed up my Blood Bronx with Tru’s Organic instead. The 1935 recipe called for a Jigger of Gin, 2 dashes of French Vermouth (I used Dolin’s) and 2 slices of Blood Orange. In contrast the new recipe on Mr. Boston’s website upped the Vermouth to 1-1/4 teaspoons and suggests the juice of the Orange instead of the slices.

After mixing per the older recipe’s instructions I didn’t taste anything but Gin. Just like the drink we were served at the restaurant. Unlike the Beefeaters, Tru is very botanical so it was a better flavor but just not the cocktail experience I had imagined. I threw in another couple dashes of the Blood Orange Bitters and I think that added a little more oomph.

The color of our homemade Blood Bronx wasn’t as pretty as the one we had at Bootlegger’s but I think that the Gin was more enjoyable.

Neither trial was, knock your socks off awesome, but they weren’t gross like our first attempt at the Black Velvet Beer Cocktail. Would I order it again, probably not. But hey, that is what this experiment is all about.

I was so grateful that Bootlegger Bistro was able to help me out this afternoon and even though the drink wasn’t our cup of tea, the Alfredo sauce was awesome!