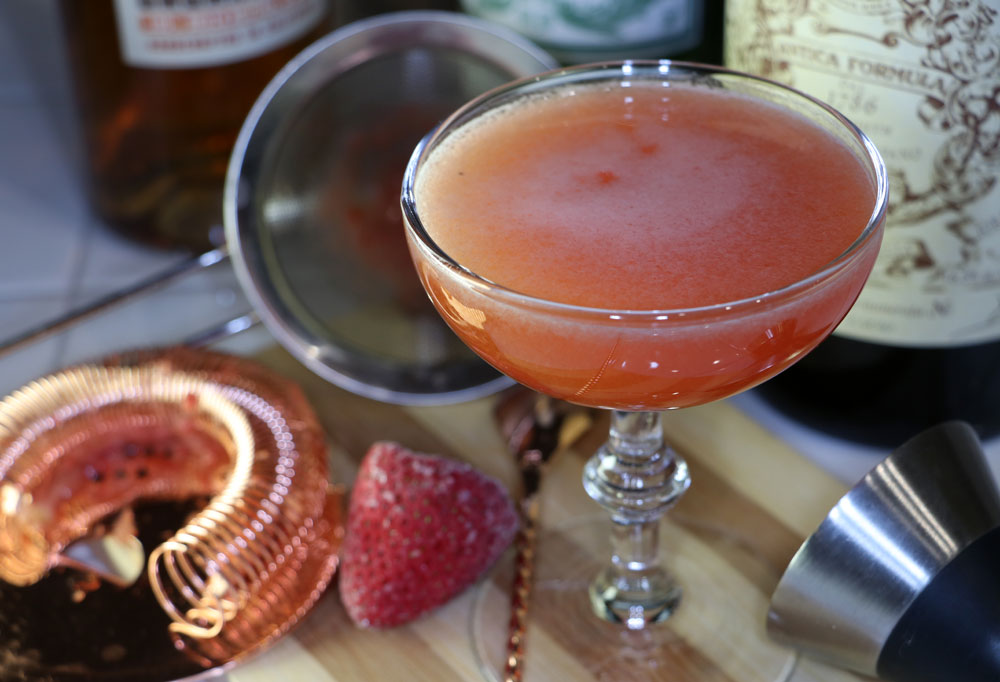 After defrosting three frozen strawberries, muddling them, adding in equal parts French / Italian Vermouth and 3/4 ounce of Gin; my Bloodhound Cocktail looks like a scene from CSI!

Seriously, this is one of the least appetizing concoctions I’ve seen thus far in Mr. Boston’s 1935 cocktail book.

The instructions for the Bloodhound are pretty straightforward. Nothing flashy about this drink, but as George Taki would say, Oh My! That really doesn’t look like something one would enjoy drinking!!! Would make a fun Halloween cocktail though 🙂

Ryan isn’t a fan of berry seeds. I personally like that crunch but decided to strain the muddled berry mixture through a fine wire mesh filter for presentation and help make the drink more enjoyable to my partner in crime.

We shook the ingredients over ice as instructed and used a Hawthorne strainer to carefully transfer the drink into a 3 ounce cocktail glass.

The thickness of the mashed strawberry added a syrupy texture to the Bloodhound Cocktail. So thick was the liquid, that we needed to use our bar spoon to squeeze the remaining moisture out of the unwanted pulp and seeds.

Unlike the cocktails that called for raspberries, the Bloodhound had a mouth-feel reminiscent to the Big Bad Wolf Cocktail which uses raw egg yolk. It also had a nice, light foam top. I would not have expected three small berries to have added so much bulk to the drink.

To taste, I’d liken the Bloodhound Cocktail to an unsweetened Strawberry Julius. It is thick but not too thick.

While Ryan wasn’t sure about the flavor of the Tru Gin after his first sip, I think that the botanicals worked well with the berry and Italian Vermouth. I might have preferred more sweetness, but all and all I the Bloodhound was a rather refreshing way to cap off the Memorial Day weekend. I could see a Daiquiri lover enjoying this one on a hot Summer afternoon.

Maybe next time I’ll add a touch of Triple Sec and a dash of Creme de Cacao to try.