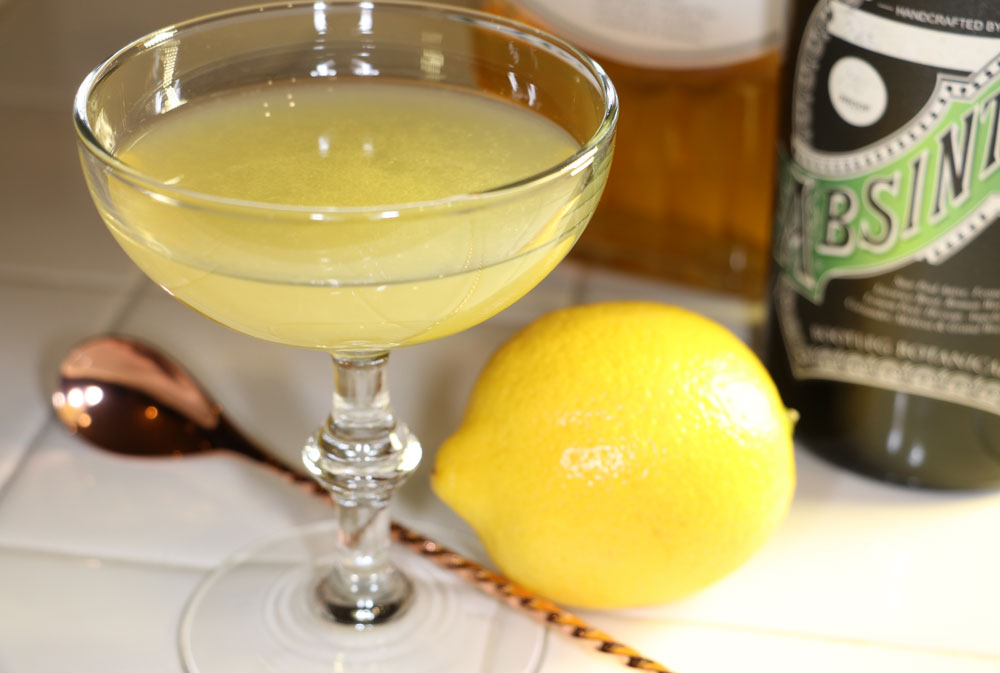 After the Calamus Root disaster that was the Bijou Cocktail, I decided to try the next Chartreuse recipe with the small bottle we picked up 3 years ago. The experiment paid off!

I couldn’t find Mr. Boston’s next recipe in any other cocktail book. It doesn’t seem to be online either except on Mr. Boston’s website. It’s a shame that this drink is relatively unknown. It was a pretty good little cocktail.

A blend of Gin, lemon juice, Green Chartreuse and Absinthe; the Bitter Cocktail is absent one expected ingredient… Bitters. Maybe the “bitter” part of the name comes from the Wormwood of the Absinthe?

As expected, the strong fishiness found in our larger bottle of Chartreuse was much improved by using the liquor from our sample sized bottle. It makes me wonder if the herbs had time to mellow with age giving the appearance of being different.

After Ryan inquired about the taste variance, a representative from Chartreuse responded yesterday morning. He assured us that the recipe has remained unchanged for centuries. Not surprisingly, the herbal cause of the problem was not revealed. The recipe for Chartreuse has remained a well kept secret of the Carthusian monks for as long as they have been making the spirit. No one knows the full recipe in its entirety, though many guesses exist.

A fantastic photo of Calamus Root (Sweet Flag) in its whole form. Apparently the plant grows along muddy bogs. The FDA banned this root from use in food because it was shown to cause tumors in mice. When infused in high proof alcohol, dried Calamus Root is oddly fishy to taste. Not really a favorite flavor in our house. Thank you for the great photo Backwater Botanics: httpss://backwaterbotanics.wordpress.com/2014/06/21/calamus-acorus-calamus/

A theory the representative had for the flavor change was the uncontrollable harvesting factors, such as climate, that can affect the herbs. As a company that deals with botanical’s daily, we can attest that this is indeed a factor. His logic makes perfect sense to us. It is tricky to maintain a unwavering flavor profile using ever changing ingredients. I dare say the task is near impossible when combining 130 different plants in one drink!

None the less, this new bottle is rather unpleasant to taste. We shared the lot numbers with the kind Chartreuse rep in hopes that they can help us source a better batch. I’ll keep you posted on what we find out 🙂

Back to the Bitters… The lemon juice is at the forefront of this cocktail followed by the Absinthe, and finally the herbal notes of our Gin No.6 and the Green Chartreuse. While the Calamus Root flavor was still there, it wasn’t overpowering and worked well with the other spirits to make a well balanced drink.

Poor Ryan had a headache so I offered him this 3 ounce cocktail in hopes that the herbs would help ease his pain. Along side the Advil, it seems like it did the trick!

Aside from the bite of tart lemon juice, I wouldn’t describe the Bitters Cocktail as bitter at all. The sweetness of the Star Pod Anise, Fennel and Coriander from the Absinthe, the Orange Peel and Cardamom in the Gin and the Mint from the Chartreuse; did a great job of sweetening the cocktail. Pretty impressive since the recipe doesn’t call for a granule of extra sugar.

All and all I’d consider the Bitters Cocktail to be a true example of the how important botanical’s are to the crafting of a spirit. Mother Nature likes her booze as much as we do 😉