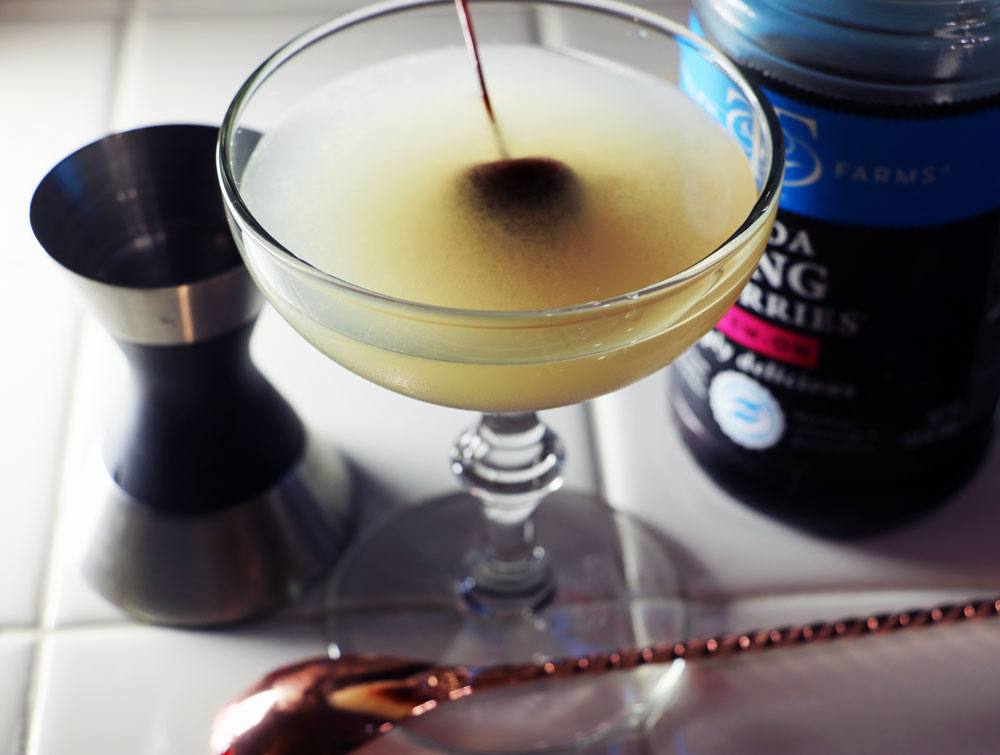 The morning alarm is only 7:30 hours away so I’ll need to keep tonight’s post short and sweet so that I’m not a total zombie in New Orleans tomorrow.

Mr. Boston’s final Bronx Cocktail is on the menu this evening. Consisting of Gin, French Vermouth and 1/2 the juice of a lime; the Bronx Terrace Cocktail is the tartest recipe yet.

I’m not a fan of bitter cocktails in general and feared that this recipe would have too much bite for my taste buds to enjoy. Never the less, we mixed up the 1 ounce Gin, 1/2 ounce Dolin French Dry Vermouth and the juice of 1/2 a lime and gave the ingredients a good shaking over ice.

The sweetest part of the entire drink is the cherry garnish. Naturally it seemed logical to sneak some of the black cherry juice in for a splash of sugar.

The Gin is surprisingly present and holds it’s own against the abundance of citrus called for in this cocktail. Our attempt to sweeten things up didn’t work and this is drink has some serious pucker power.

I really didn’t notice the botanicals for the vermouth which is a shame. I would have liked this particular Bronx Cocktail better with less lime and roughly 1/2 ounce of simple syrup. It’s just too darn bitter for me.

While the Bronx series of cocktails started off strong, the last half of the six were not my cup of tea. I had hoped that tonight’s recipe would have made a comeback for the series but I think it was perhaps my least favorite of the lot.

What I did learn from trying out all six of the Bronx Cocktails is this… it appears the key to a Bronx is a combination of Gin, Vermouth (either dry, sweet or both) with a citrus juice pairing. We enjoyed this series with Orange and Pineapple but the Lemon and Lime were too heavy. Just as not all movie sequels can live up to the original, perhaps Leo Cotton should have stayed true to the original recipe. It was a nice idea to craft variations of what was historically a very popular drink however, they should be good variations.

I think I must call it a night and try to catch some z’s. Tomorrow I’ll be writing you from Bourbon Street! Cheers everyone 🙂