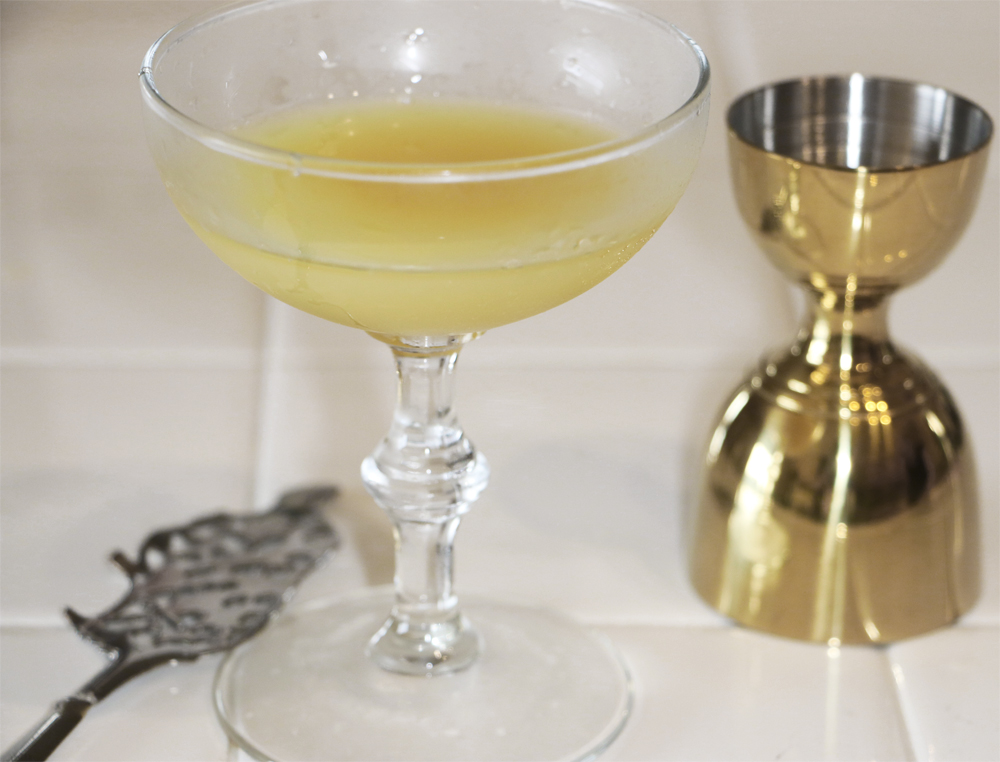 When I told Ryan that today’s Mr. Boston’s cocktail was a combination of equal parts lemon juice and Absinthe his “hell no” response was exactly what I thought when I read the recipe for the Brunelle.

Before traveling out to New Orleans, I reached out to the Old Absinthe House in hopes that they would be able to help us recreate this classic. Unfortunately we never connected and during our many walks past their historic bar, Ryan and I were too burned out to fight the crowds. By the time Sunday rolled around, my poor stomach needed a break from booze and thus the Old Absinthe House will remain on my bucket list until our next visit to the Big Easy.

Turns out that the Brunelle cocktail was a bit more complicated than I initially gave it credit for. Over coffee this morning I really gave the preparation of this lemony Absinthe drink thought. My biggest epiphany was the clarity of the final cocktail.

During Tales we took in Dave Arnold’s seminar on clarification of ingredients in relation to the preparation of mixed drinks. Dave’s 90 minute talk about the benefits of employing a Centrifuge to promote clarity was a lot more interesting than my non-scientific brain was imagining. I knew Ryan would love the seminar but I was surprised that I too found it fascinating and inspiring. We really do need to get a hold of one of Dave’s Centrifuge’s when they are released, I just don’t know where it will fit in my tiny kitchen 🙂

Dave Arnold looks a little confused as he shows off his awesome Centrifuge. I wonder what he was thinking…

Since I don’t currently own a Centrifuge, clarifying my lemon syrup for today’s recipe took an arsenal of tools to accomplish. All and all, I was happy with the results.

I’ve been struggling to get all the juice out of my citrus for months now. Low and behold, a tip to nip the other end of the fruit popped up on my Facebook feed and I gave it a try. Squeezing was MUCH easier 🙂

The pulp still manages to sneak through the juicer which is why I wanted to clarify the juice before adding it into the Absinthe.

After dissolving the sugar granules in the lemon juice, I ran the mixture through our fine mesh strainer.

The final step was running the syrup through our Aeropress. The base holds a rather fine paper filter and generally works well for this type of project.

By the end of my 30 minute lemon syrup making adventure, I managed to fill my counter with tools. It was worth it though.

My next query was whether or not the acidity of the lemon juice would impede on the louche of the Absinthe. I asked Ryan to help me record the addition of the iced lemon syrup in the hopes of capturing the transformation. I removed my chilled 3 ounce coupe from the freezer, added in a touch over 1/3 an ounce of our homemade Absinthe and after shaking the filtered lemon mixture over crushed ice… the ice was too frozen to pour 🙁 A couple of ice cold drops of liquid were all I managed to eek out of the shaker.

In an effort to salvage the drink, I popped the coupe back into the freezer while Ryan stirred the ice to quicken the melt. It didn’t take long for the frozen cubes to give me back the spoils of my earlier effort. Here is take two of the louching of the Brunelle Cocktail.

The final Brunelle recipe we ended up with looked a lot like this:

Both Ryan and I were surprised we enjoyed this combination as much as we did. I almost liked it better than preparing Absinthe the traditional way (3 parts ice water, 1 part Absinthe and a sugar cube). This recipe was a wee strong however. Drinking 85 proof cocktails can be tricky business at the best of times, let alone 1:30 in the afternoon. We decided a little more water was necessary and added back some of the lemon soaked ice to slowly dissolve in the glass as we sipped.

I think we both agreed that this was a really nice Absinthe cocktail. If you are a fan of the green fairy, I highly recommend giving this one a go.