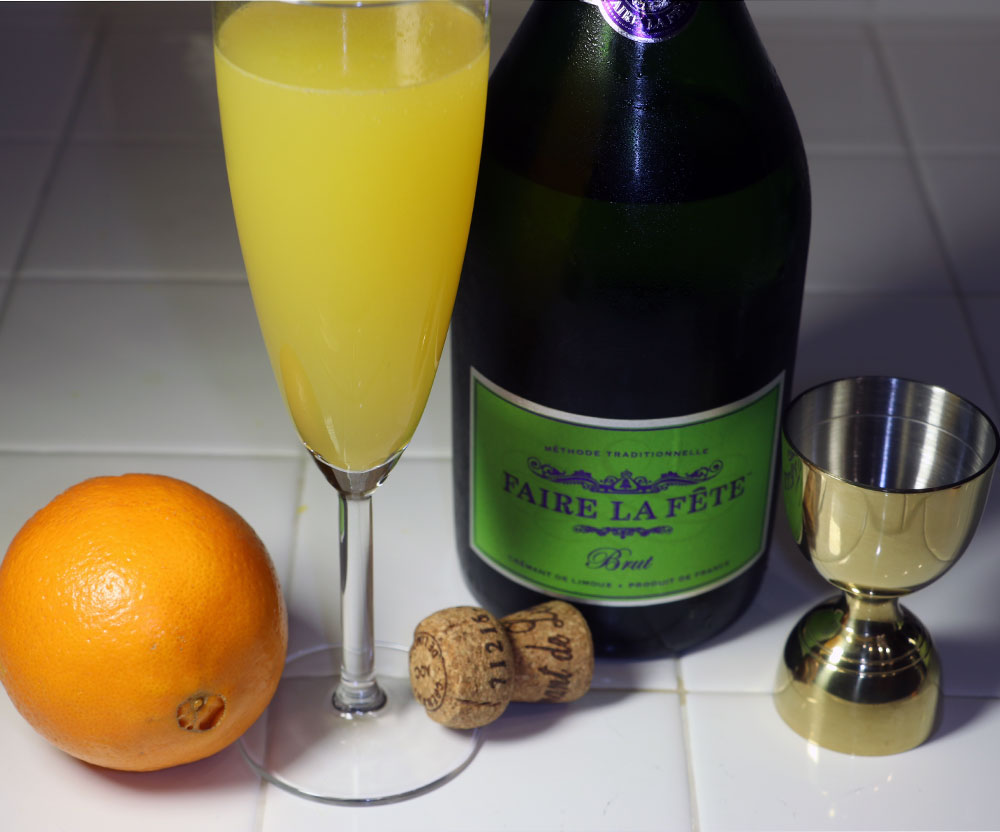 All these years I’ve known the combination of orange juice and champagne as the Mimosa. I thoroughly enjoy this fizzy citrus refreshment and was surprised to find out that it originally known as the Bucks Fizz.

Now, some say the key differentiation between the Mimosa and Bucks Fizz is the ratio of juice to spirit. I hadn’t realized there was even a rule for the amount of OJ to use until today. Apparently there is…

Multiple sources say a Mimosa should be equal parts of each ingredient where as the Bucks published by Leo Cotton in 1935 notes the use of 4 to 1 in Champagnes favor. The later seems to be a more reasonable ratio and likely closer to my normal haphazard pours of the past.

The first order of business was choosing the Champagne. Thankfully Ryan stumbled on the Faire La Fête  (to party in French) at Tales on his way out of the elevator at our hotel.

Having trouble rousing myself out of bed that morning, Ryan set off alone to see what boozy adventure he could find. At Tales, that is not a difficult task.

I did not have an opportunity to try out the bottle of Brut Ryan brought back to the room and decided it would work perfectly for tonight’s Mr. Boston’s recipe.

Faire La Fête is not technically a champagne. A true Champagne must be grown and fermented in Champagne, France by definition. However, Faire La Fête is a French wine from the village of Limoux. Our bottle was crafted from Chardonnay grapes using a traditional Champagne style of production. Zipcode appears to be the main difference.

To taste, the Brut is very dry. The dryness is too much for me on it’s own but works beautifully in tonight’s Bucks Fizz. It’s not overpowering and blends well with the sweetness of the citrus juice. On a side note, I’m in love with this green label. The metallic purple foil is gorgeous!

The next order of business was getting our hands on some decent Oranges. It seems Florida’s Orange season ended in February and we’ve been having a bear of a time sourcing them at our local Albertson’s ever since. Today we decided to see if the local Latino market would have more of a selection. They did!

I wasn’t sure how much juice one of these Chilean Naval Oranges would yield so I grabbed 3 at the market. Not only were they all a fantastic, vibrant color but one was able to make me the 2 ounces I needed for the Bucks Fizz.

Now that I’m on this clarifying kick, I opted to use our finest mesh bag as a way to keep the extra pulp out of my finished juice.

I was pleased with the results.

The final piece of the puzzle was the stemware. The recipe noted the use of 1/4 glass of Orange Juice. Thankfully Mr. Cotton threw me a bone and added that the glass size should be 10 ounces.

As 10 ounce stemware is unusual in this vintage book, I flipped to the back to see if there was a sketch to define the shape. The closest glass I had in my arsenal was an Champagne flute from Ikea. Unfortunately it only held 8 ounces of liquid.

I scaled the recipe to fit the 8 ounce glass and here is what I came up with:

The Bucks Fizz Cocktail is said to have been discovered by a bartender at London’s Bucks Clubhouse during the mid 1920’s. The Mimosa wasn’t brought into the picture until the later part of that decade.

Pretty simple but definitely right up my alley.