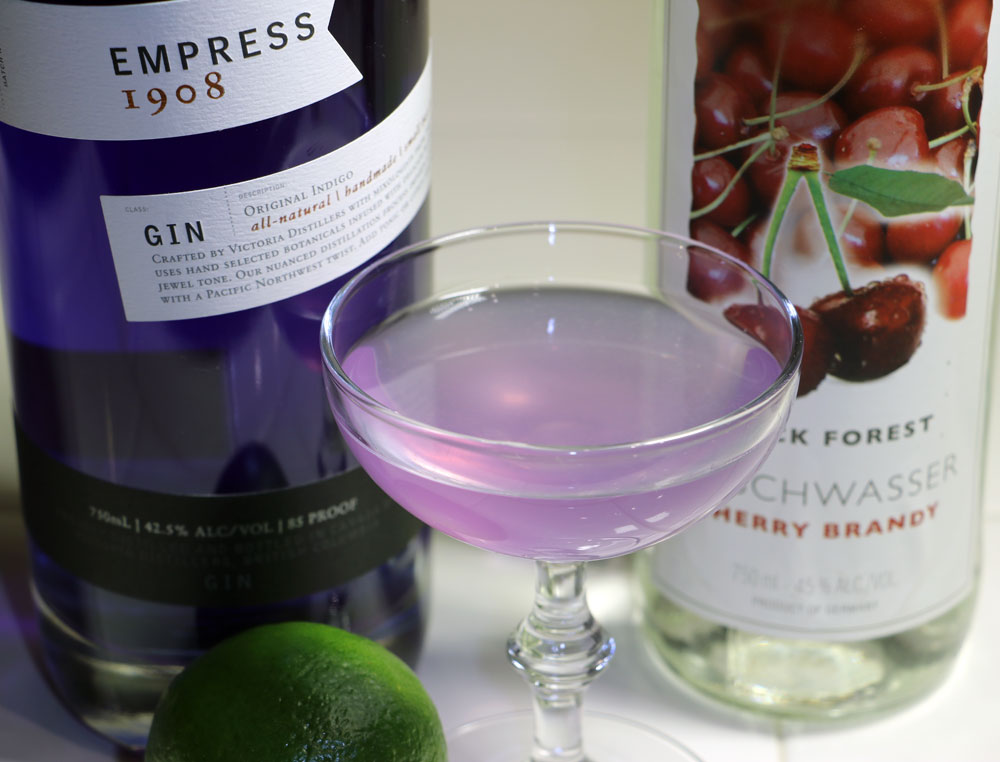 The oldest Bulldog Cocktail I could uncover was published in Hugo Ensslin’s 1917 manual ‘Recipes for Mixed Drinks’. As I combed the internet in search of history behind tonight’s recipe, I discovered that while Hugo and Leo Cotton agreed on the quantities of each spirit for the Bulldog, they did not agree on the spirit itself.

World War I was underway during the time of Hugo’s cocktail publication. World War II was only a few years away in 1935 when the first issue of Mr. Boston’s hit the press.

During both World Wars, the English Bulldog symbolized strength and resilience for trips in the UK and United States.

While the recipe Leo Cotton published 18 years later swaps out the Bacardi for Dry Gin.

Germany (the country known for Cherry Brandy) was the “enemy” during both World Wars. Although Cuba was unable to send troops to Europe for battle, the country worked very closely with the United States during the first world war by helping to protect the West Indies from German U-boat attacks. I’m not really sure what that has to do with Bulldog’s but there you go!

The British and American armed forces were at the forefront of fighting Germany during WWII. As Prime Minister of the UK during the war, Winston Churchill, was often referred to by Nazi Germany as a Bulldog. The only problem with my theory… Churchill didn’t become PM until 1940 and my Mr. Boston’s was published in 35′ 🙁

The timing discrepancy leaves me at a loss. But I do think I’m on to something – maybe it is just wishful thinking.

In any case, I figured I should try out both Bulldog Cocktails in the name of science. For my Gin version, I wanted to try out a new Tales discovery called Empress 1908.

Perhaps the most striking difference in this Gin is the blue hue. It’s a lovely shade that one would likely mistake as artificial at first glance. On the contrary, this brand new Juniper spirit uses Butterfly Pea Flowers to give the drink it’s coloring.

The Butterfly Pea Flower bloom from a vine plant native to Asia. If the flower bloom is not plucked it transforms into a legume that can grow to nearly 3 inches in length. As the name implies, this flower attracts butterflies. It’s shape reminds me of a Georgia O’Keeffe painting.

I settled on using the Empress 1908 after testing the 1935 recipe with our homemade compound Gin and discovering the infused botanicals overshadowed the cherry a bit too much.

Aside from Empress 1908’s striking color, the distilled Gin offers a light Juniper forward flavor. It reminds me of a mellow version of Bombay Sapphire.

For me, it isn’t really a neat sipper (a bit too light on flavor) but when combined with other ingredients, I find this Gin to be quite nice.

I assumed that I wasn’t going to love the Bacardi version however, Rum is a sweeter spirit and I figured that might help cut the tart lime juice back. In hopes of reducing my calorie consumption for the evening, I mixed up the 1917 recipe mini sized. I used: 1/2 teaspoon of Bacardi White Rum, 1 teaspoon Kirschwasser and 1/4 teaspoon fresh squeezed lime juice.

The acid in citrus juice chemically alters the color of the Butterfly Pea Flower. What starts out a deep purple morphs into a pinkish hue right before your eyes.

Despite the ice melt, this is an aggressive cocktail. As suspected, the lime juice is a bit too much for me (I even scaled it back). The drink reminds me of the Bacardi Cocktail and the Cherry really doesn’t come through with the Rum. I think I should try again with some Cherry Herring …. hummm

For our final Bulldog Cocktail, we mixed up 3/4 ounce of Empress Gin, 1-1/2 ounces of Black Forest Cherry Kirschwasser and scaled the lime juice to 1/4 ounce. Neither Ryan or I really liked the drink. It is too strong and lacks any sweetness.

In an effort to improve the cocktail we added 1/4 ounce of our homemade compound Gin. It didn’t help.

Next Ryan whipped up a batch of simple syrup and added 1/2 ounce to the mix, it was too sweet!

Finally after adding in 3 bar-spoons of lime juice the drink was drinkable. Still not my favorite but not terrible either.