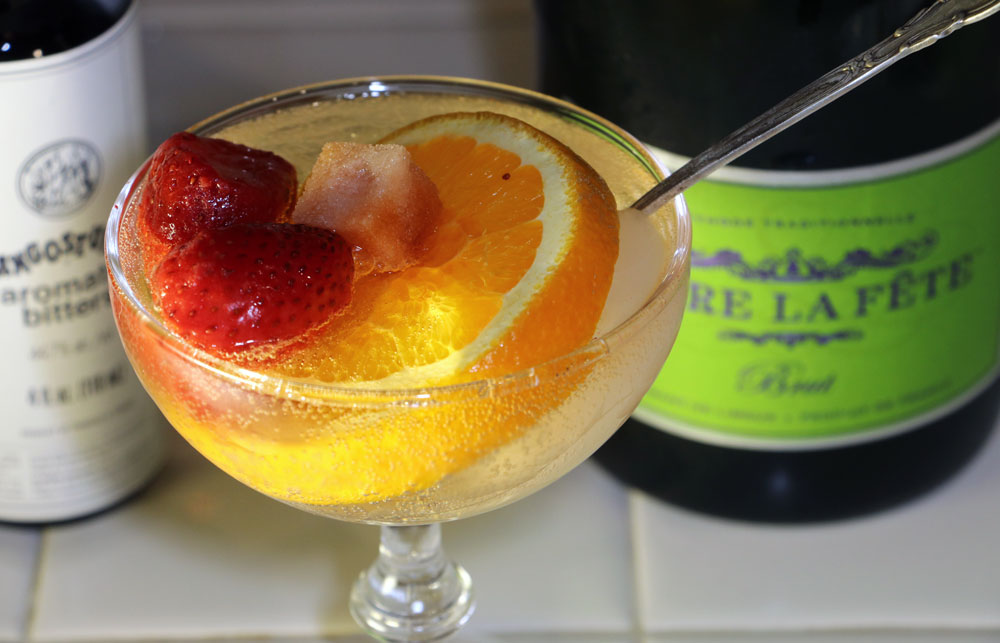 The Champagne Cocktail kicks off five day’s of bubbly beverages from Mr. Boston’s 1935 Bartender Guide. With simple ingredients, tonight’s cocktail does not appear to be anything special but it does sound delicious!

Jerry Thomas’ 1862 ‘Bartender’s Guide – How to Mix All Kinds of Plain and Fancy Drinks’, contains a Champagne Cocktail recipe that mirrors the recipe published by Leo Cotton 73 years later… more or less.

It appears that Harry Johnson  (insert funny name joke here) fancied the recipe up with the addition of an orange and lemon peel in 1887. From there, the dressed-up version was published by Harry Craddock in 1930 and within my 1935 copy of Mr. Boston.

Of all the cocktail books I turned to for guidance on tonight’s recipe, I found the excerpt from the ‘New and Improved Bartender’s Manual by Harry Johnson on the preparation of the Champagne Cocktail particularly interesting.

According the Mr. Johnson, a “proper” Champagne Cocktail should be prepared as follows:

In mixing all the different cocktails, it is proper to fill the mixing tumbler with fine shaved or broken ice, before putting in any of the ingredients; as it has a much better appearance, but in mixing a Champagne Cocktail it is the proper way of having two or three lumps of clear crystal ice, place them on the bottom of your glass and mix as follows:

This very detailed Champagne Cocktail preparation description comes with it’s own illustrated drawing. Harry took his Champagne very seriously! What’s wrong with that glass stem on the right though?

Having not procured the Boker’s bitters yet, I went with the other Harry’s (Craddock) suggestion of using Angostura.

I had assumed I would use our 1930’s bubble stem Champagne flutes for tonight’s recipe but because I needed to fit in all that fruit, I opted to use one of our new antique coupes instead.

Placing the ice in first, the orange slice fit nicely on top. The frozen Strawberries I had were closer to the small fruit illustrated in Mr. Johnson’s book still they looked a bit wonky balanced on top of the citrus. While Harry noted that the sugar cube should be placed on the ice directly, I couldn’t do that with the large orange slice in the way. For the sake of presentation, we decided to place the cube on top of the orange instead.

Trying to stir in the sugar cube and bitters while not throwing the fruit overboard was pretty amusing.

After delicately blending the ingredients together, the final cocktail reminded me of a Spanish Sangria. I thought that the sugar cube to Champagne ratio would create a drink that was too sweet but, it wasn’t. In fact, the bitters seem to have altered the Brut enough to trick my tongue into thinking I was drinking a sparkling red wine.

The fruit really doesn’t add very much since it isn’t allowed to infuse the Champagne before drinking. The aroma is nice but, I think the Champagne cocktail using only the orange peel and lemon called for in the 1930’s era recipes would be as enjoyable, if not more. At the very least, you get more alcohol by omitting the ice and huge hunks of fruit.

I think I’ll test that theory with another round… Cheers!