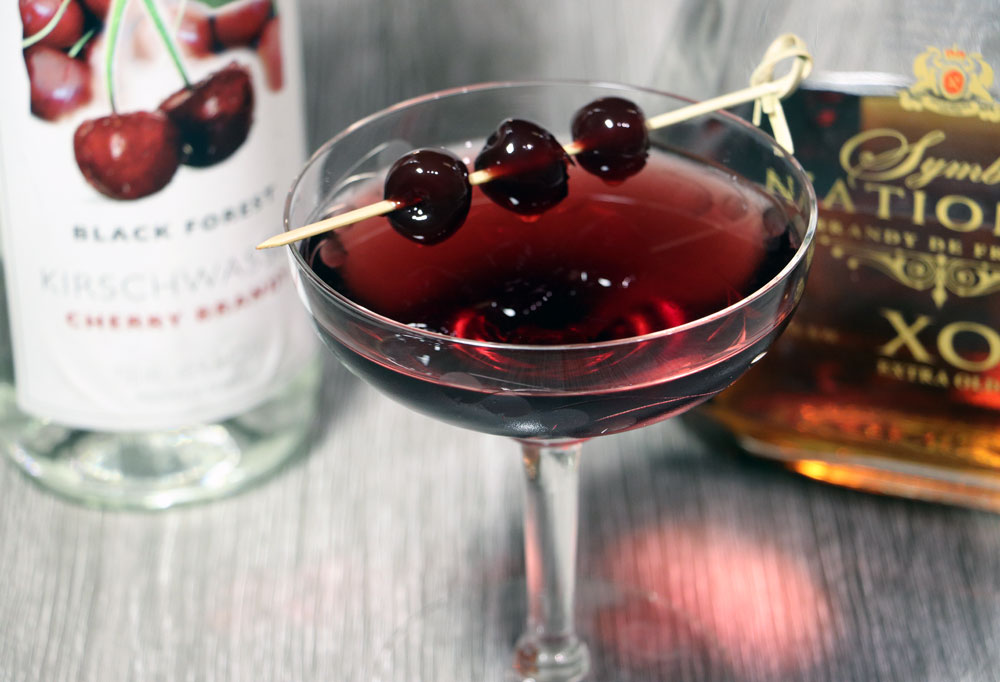 There is no telling where the Cherry Blossom Cocktail began. By all accounts, the oldest recipe was published by Harry Craddock in 1930. Naturally Cherry Brandy is called for but still I wondered if there was any deeper meaning behind the drink.

Could the Cherry Blossom cocktail have been inspired by a popular British shoe polish company? It wouldn’t be the first time a drink of this vintage was seemingly invented for commercial advertisement of a product. Still, a shoe polish seemed too strange for Harry to name a cocktail after.

I absolutely adore this vintage shoe polish tin. The artwork is so beautiful! Photo found: httpss://www.blancoandbull.com/boot-cleaning/cherry-blossom-polish/

There was a Cherry Blossom Club which opened shortly after the repeal of the Volstead Act in Kansas City. The only problem is that the date was circa 1933, three years after the recipe was published.

Perhaps, the answer is as simple as the fashion of the time. As the younger generation evolved out of Victorian era fashion of their elders, embroidered prints from exotic countries in throughout Asia, Russia and Egypt became the rage in the 1920’s. The Cherry Blossom motif can be found on a wide range of pieces from the 20’s to the 40’s including clothing, wall art and China patterns.

This is a goregous example of a Cherry Blossom glass from the Depression Era. If you look at the center of the plate, you’ll see a cluster of cherries. Photo found: https://www.depressionelegantglass.com/cherry-blossom-depression-glass-real-reproduction-leaves/

My grandparents were huge fans of Asian motifs and had several pieces of artwork featuring the Cherry Blossom. In turn, I too fell in love with this style of art. There is something timeless and beautiful that always catches my eye. I can see how this style could have inspired a cocktail.

To a glass half full of cracked ice add:

The recipe Leo Cotton published five years later updated the Brandy and Cherry to “Old Mr. Boston” Nectar of Apricot and Cherry. For proportions, Mr. Boston’s script calls for 1/2 of each type of Nectar and a dash of Curacao, Lemon Juice and Grenadine.

Honestly, neither recipe really knocked my socks off based on description alone. Neither the Cherry Kirsh nor the Apricot Brandy I have on hand is sweet and I didn’t think one dash of Grenadine will liven them up enough.

Going on the assumption that Mr. Boston’s Nectar was likely sweetened, I decided to play around with this recipe a bit.

I always hate throwing away the syrup from my cherries so why not use it in place of the Grenadine? Rather than sweetening the drink with simple syrup, I upped the amount of cherry syrup and Curacao from a dash to 1/2 an ounce of each. I also opted to follow the Savoy recipe and went with plain Brandy rather than Apricot. After all the tweaks were finalized my finished Cherry Blossom Cocktail looked like this:

I think I found the winning combination because two rounds were made of tonight’s cocktail. As I wrap up this post, Ryan and I are quietly enjoying our Cherry Blossom’s, life is good!