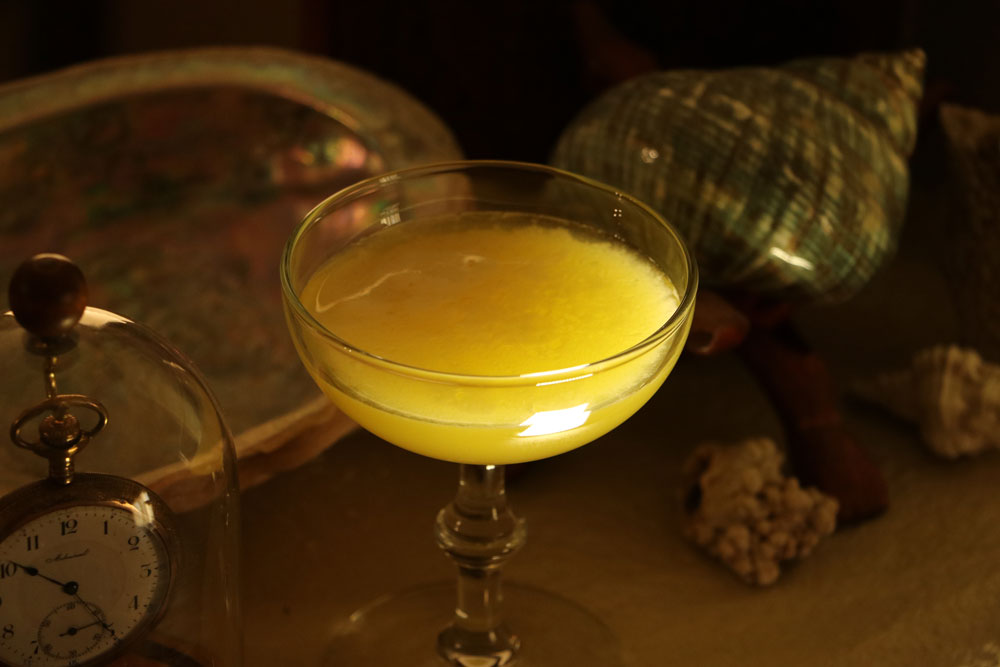 By some miracle we managed to get home before the sun went down yesterday. In fact we even had time for our nightly Mr. Boston cocktail (or 2 😉 )

As I hinted yesterday, last nights Around The World Cocktail* notes some strange ingredient combinations. Surprisingly after mixing up the Pineapple, Green Creme de Menthe and Gin, Ryan and I discovered that these ingredients actually go quite well together!

Using our homemade Creme de Menthe which had mistakenly become the green variety by default of the heavy chlorophyll content of the herbs, I expected our Around The World Cocktail to be a murky green tint. Instead however, the lack of unnatural food coloring did not transform our yellow Dole Pineapple juice to swamp water but kept the natural hue intact. Maybe I don’t need to be concerned about our home-brew turning the color of drinks calling for white creme de menthe after all.

Down to the last 1/4 ounce of our Gin No.6, I added an additional 1/4 ounce of Vodka to bring the Gin volume up to 1/2 an ounce in total. Since our homemade compound Gin is a maceration of Juniper, Orange Peel, Licorice, Coriander, Cardamom and Cinnamon in plain ol’ Vodka; I figured extending the volume with the base spirit should do the trick.

While certainly Pineapple / mint forward, the botanical notes came through subtly giving this cocktail a lovely full flavor profile. Out of shear curiosity, Ryan and I decided to conduct a little extra experiment to see how some of the commercial distilled Gins worked in this cocktail. Here’s what we discovered.

At the risk of sounding bias, I can truthfully say that the Around The World Cocktail benefited from a heavily flavored Gin. Along side our Gin No.6 infusion, we mixed up this cocktail using Bombay Sapphire, Tanqueray  London Dry Gin and Hendricks. All five cocktails were enjoyed side by side so that we could get a better idea of the nuances of each.

At the bottom of the pack was the Bombay. While alone this is a very Juniper forward Gin profile, the strong Pineapple and mint notes of the Around The World Cocktail totally overpowered the Bombay. In fact, something in the blend of herbs used in creating this Gin enhanced the Mint and made for a rather unpleasantly sweet mixture.

Ryan and I were split on whether the Tanqueray or Hendricks was the next least appealing Gin to be used in this particular cocktail. I found the Hendricks to also enhance the mint as the Bombay had and the Tanqueray, though more balanced, made the drink feel watered down. If I were to enjoy this drink at a bar Tanqueray would be the name brand I would choose.

As I said before, I don’t want to be seen as being heavily favored to my own Gin blend but I would be remiss if I didn’t give my honest opinion of this experiment just as I did when noticing that our Gin didn’t work well in the Allies Cocktail awhile back. It definitely isn’t that I think the three brands aren’t good because they most certainly are, just not for this cocktail. I’ve found that strong flavors need equally strong flavors to play with in order to make a well balance drink. Pineapple and mint are definitely strong flavors 🙂

Aside from some seemingly weird ingredients, the Around The World Cocktail is a very nice tropical drink. I’m still not sure why it’s called Around The World when the Pineapple and Gin only represent Polynesia (Hawaii wasn’t a U.S. state yet) and Great Britain (United States if you use the suggested Old Mr. Boston’s Gin) while Creme de Menthe hails from France. Whatever the reason, this cocktail was a total surprise and definitely one to give a go sometime.

Well, it’s back to production work for me. With any luck I’ll find a spare moment to share the Atty Cocktail with you tomorrow. Cheers!

* Quick Note: The Around The World Cocktail recipe on Mr. Boston’s website is exactly the quantities we used for our tasting test. The original book adjusts those quantities down by half but the new recipe will fill the recommended 3 ounce cocktail glass nicely.