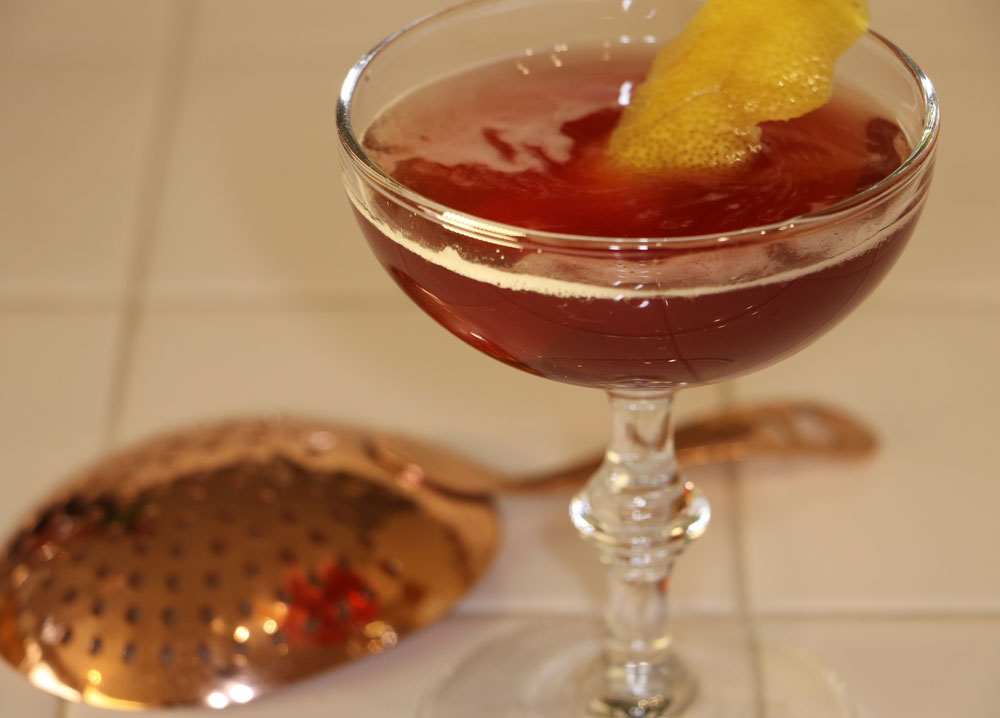 In an effort to catch up from our week long hiatus, Ryan and I went on a tasting spree last night. It only seemed fitting since the next four recipes in Mr. Boston’s 1935 edition all begin with the word Appetizer. Might as well keep them in a series, right?

Up first was a drink I became familiar with shortly after starting this blog series.

One night an article about how the Royal family enjoys their drinks popped up on my Facebook feed (you think they’ve been tracking my habits much?) Having just finished the Netflix series The Crown, I have a new found curiosity about the Royals and this article was right up my alley 🙂

Queen Elizabeth’s go-to was up first in the article and featured a spirit I hadn’t yet tried at the time… Dubonnet. Of course with this new knowledge in mind, Ryan and I had to make a trip to Total Wine, pick up a bottle, and give the Queen’s 1 part Gin, 2 parts Dubonnet with a citrus twist a try.

For those of you who have yet to try this combination, you are missing out. It reminds me of a Sangria but there is much more herbal interest in this drink stemming from the botanicals in the Gin and added ingredients in the Dubonnet. I liked it so much that I couldn’t help but serve up 2 in the same night! I totally understand why the Queen, and her grandmother before her, frequently enjoy a daily dose of Dubonnet and Gin. Maybe it is one of the reasons for their long life?

All that aside, the first Appetizer Cocktail listed in Mr. Boston’s is equal parts Gin and Dubonnet shaken with the juice of 1/2 an Orange.

Having a bit of fresh squeezed juice left from our American Beauty Cocktail a couple nights before we added what we had to the 1/3 ounce parts of liquor. Yet again Mr. Cotton didn’t tell us whether or not we needed to shake this drink over ice but yet again we decided the volume of the ingredients did not match the size of the serving glass.

Perhaps the juice was a little old or the ice diluted things too much, either way, neither of us were wowed by the Appetizer Cocktail which given our earlier love of the combination surprised us both. Not wanting to get too tipsy before making it through all four 3 ounce drinks, we transferred our first cocktail to another glass and popped it into the fridge for safe keeping.

The Appetizer No.1 Cocktail is not a huge adjustment from the first, omitting the orange juice and increasing the equal parts of Gin and Dubonnet from 1/3 to 1/2 an ounce. While this mix was much better we decided that part of what makes the Queens version so good is the smell and flavor of a fresh lemon peel. That in mind, we added one to the Appetizer No.1 and this drink was instantly made into one of our faves in the series.

Up next was the Appetizer No.2 Cocktail. If you have been following along, you may remember I noted that yesterday’s drink, The Apparent Cocktail, has been replaced on numerous cocktail sites throughout the web with the ingredients listed in Mr. Boston’s 1935 for the Appetizer No.2

A quick Google search brings up three Apparent Cocktail recipes which replace Creme de Cacao with Dubonnet. True form to today’s drinking habits, the recipes have increased the quantity of alcohol from 1/2 ounce each to 1 ounce of both the Gin and Dubonnet but kept the Absinthe at the traditional 1 dash serving. The Appetizer No. 1 and No. 2 were hands down my picks for the night. Something about the added citrus and Absinthe made the pairings more enjoyable.

The fourth and final Appetizer cocktail in the series, No.3, breaks from the Dubonnet and Gin trend all together. Comprised of “Old Mr. Boston Whiskey,” Bitters and Curacao we were a little confused on where to start on the No.3

The confusion stemmed from the Whiskey. Was it Rye, Bourbon, American or some long forgotten Whiskey from 1935. It’s handy that the book has copies of the original advertising mid-way back and I flipped to the Whiskey section to try and decipher the code.

Being in black and white print, I couldn’t gather any information based on color. Mr. Boston’s Straight Whiskey is pictured side by side in two different advertisements. On the left the drink is described as “gleams clear and good in its beautiful bottle.” Although a tiny bit hard to see, the label on the illustrated bottle says 100 proof.

While I took “gleams clear” literally and gravitated towards the idea we needed to work with Moonshine or unaged American Whiskey, Ryan argued that 100 proof  likely meant “Bottled in Bond” and with flavor in mind we should use our Rittenhouse Rye which is 100 proof.

Not one for either Moonshine or unaged American Whiskey, I agreed to the Rittenhouse. Another challenge we ran into came from the need for Curacao. All out of Triple-Sec, we still haven’t found our ideal bottle of uncolored Curacao and only have the blue version on the shelf. We knew this would make for one ugly drink but we went for it anyway 🙂

As suspected, our cocktail was a putrid green and looked like the Creature from the Black Lagoon’s bath water. But color aside, the Appetizer No. 3 was a nice tasting, if not a bit strong, drink. Despite the ice melt, I thought the 100 proof Rye could use a bit more watering down to be more enjoyable. In the end, I had trouble getting past the color and Ryan enjoyed the rest of it.

Quick Tip: Don’t use Blue Curacao for the Appetizer No.3 Cocktail unless it’s Halloween and you want a Swamp Monster Punch 🙂

Despite their tiny sizes, sipping four 3 ounce cocktails before putting food on our stomachs made for a light headed, giggly start to the evening. All I can say is that it was smart to hold off on enjoying the drinks until after all the photos were taken!