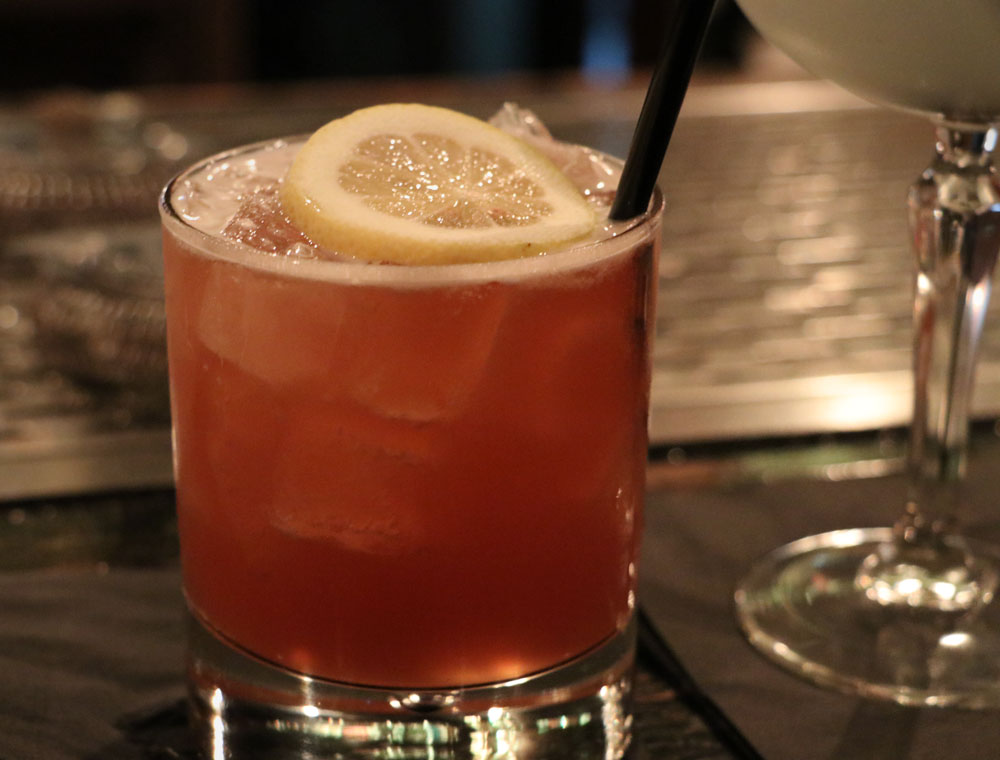 I’m not sure where to start with the Blackthorn Cocktail. On the surface this three ingredient drink is rather simple. That is until you look into its history.

After having our press credentials accepted for this years Tales of the Cocktail event in New Orleans, I realized I won’t have my home bar with me for continuing my Mr. Boston’s experiment for a whole week! I decided the only logical solution is to figure out which drinks will be on the menu while we’re away, and find bartenders in New Orleans to make them for us.

To test my idea out, we contacted  Joe Pereira from Herbs & Rye and asked if he was cool with us trying their version of the Blackthorn for today’s post. Joe was the brilliant bartender who created the drool-worthy foam a top the Ramos Fizz I had on our first visit. I knew if anyone in town could mix up a great version of the Blackthorn Cocktail, the team at Herbs & Rye would be the top choice.

I love Herbs & Rye’s menu! Now thanks to my Mr. Boston’s series I even know who the dude rocking the killer stache is 🙂

I hadn’t been introduced to Mr. Bullock’s ‘The Ideal Bartender,’ cocktail book before noticing his name underneath the Blackthorne (Bullock’s version is spelled with an e) Cocktail description on Herbs & Rye’s menu. As the first black American to publish a cocktail book and given the rarity of his position during the early 1900’s, Tom Bullock’s story is as interesting as the drink I am writing on today. In fact, Mr. Bullock’s Mint Julep became a part of an American political scandal in 1913.

Apparently, then President Theodore Roosevelt combated reports of his drinking habits by claiming he’d abstained from booze since leaving the White House. That is aside from a Mint Julep he had at the St. Louis Country Club where Tom Bullock served as head bartender. Even then, Roosevelt insisted he had only taken a sip or two. As the New York Time article I gleaned this info from reports: “The St. Louis Post-Dispatch found this claim outrageous enough that it printed an editorial basically calling Roosevelt a liar. “Who was ever known to drink just a part of one of Tom’s” juleps, the newspaper asked incredulously.”

Ryan and I arrived at Herbs & Rye after 9 PM last night. While this would be early for a party-goer visiting Las Vegas for fun, it was late for us natives who had just finished shipping out a large order mere hours earlier. Needless to say, I was in need of a beverage… or two 🙂

Unfortunately Joe was scheduled as a server and wasn’t able to make our drinks this time around. His partners in crime, Isaiah and Eddy did a great job in Joe’s absence however and Joe was able to stop by and check on us a time or two.

In addition to the Blackthorne I needed to sample, I wanted to try a professionally made Aviation and compare it to my home crafted versions from a while back. Isaiah, worked with speed and precision, mixing both cocktails at one time.

Unlike the three Blackthorn Cocktail recipes we had tried out at home, Herbs & Rye’s / Tom Bullock’s version is sans Vermouth. Instead, their cocktail consists of Sloe Gin, Green Chartreuse, Pineapple Syrup, lemon juice served over ice.

While Ryan and I thought Isaiah’s presentation was lovely, Joe wanted it to be perfect. Thus debate between the bartenders ensued over whether the proper ice was used. After they consulted with their recipe books, it was decided that the crushed ice was appropriate for the drink. I commend their dedication to detail!

For some reason, the use of Green Chartreuse in Tom’s recipe had skipped my mind. I didn’t expect it to be there, then I tasted the drink. Immediately I tasted the Calamus Root but it took my brain half a second to place the odd taste. We mentioned it to Isaiah who promptly poured himself, and us a nip from the Chartreuse bottle behind the bar. Sure enough, that fishy flavor was omni-present though Ryan and I thought it may be less potent than the bottle we have at home.

Isaiah shared that we were not the first to mention the odd flavor but that he hadn’t heard it for sometime. Seems another writer pointed it out a couple years back but unlike our Calamus theory, the other author thought the flavor was from improper temperature control during transportation. The conversation was timely as we received another response from Chartreuse this morning. The representative suggested that we allow our bottles to age as they feel the liqueurs taste improves with time. Given that our sample size was six years older than than the new bottle we pick up recently. Perhaps the aging made a difference after all. In the meantime, I suppose we’re stuck with a fishy batch for this Mr. Boston’s series which is unfortunate 🙁

As we sipped our Aviation and Blackthorne cocktails I noticed that continual sipping of the later decreased the Calamus flavor. It was as if my taste buds adapted and the fish disappeared. Once I took a water break and resumed drinking the flavor was back which was a total bummer. Maybe the trick to imbibing on Chartreuse is not stopping once you start. I don’t mean to shoot the drink, just continually sip without mixing in other liquid or food.

A quick Google for Blackthorne Cocktail results in a myriad of recipes and theories about the drinks moniker. While Mr. Boston’s, Jacob Straub’s ‘Drinks’(1914) and Hugo Ensslin’s ‘Recipes for Mixed Drinks’ (1917) all call for a type of Vermouth mixed with Sloe Gin in addition to or without Bitters; some blogs claim an Irish Whiskey recipe from Harry Johnson’s 1900 ‘Bartender’s Manual’ to be the first. If that was the case, I had to try all the options, so I did.

I snapped a quick glamour shot to try and illustrate the color variance between the cocktails. They are in order from oldest to newest (1914 – 1935). I’m not sure the slight color change was accurately captured by the lens but don’t my aunt’s Pousse Cafe’ glasses look adorable?!

After tasting five different versions of the Blackthorne Cocktail, our impress was this. Jacob Straub’s recipe won the contest having the best balance of flavors. Next I’d say Mr. Boston’s recipe took a respectable second. Of the initial three we liked Ensslin’s version least. Unfortunately the Calamus notes from the Herbs & Rye cocktail landed it in third and the “original” 1900 recipe was in the bottom of the pack. I may need to re-try the last recipe once I get a hold of the Boker’s Bitters needed and see if that improves the drink.

All and all, this was a really fun drink to play with. I can’t wait to repeat our professionally crafted drink posts down in New Orleans in a couple months. It’s going to be so much fun!

Now if we can find someone in town to make us a Blue Blazer, we’ll be set…