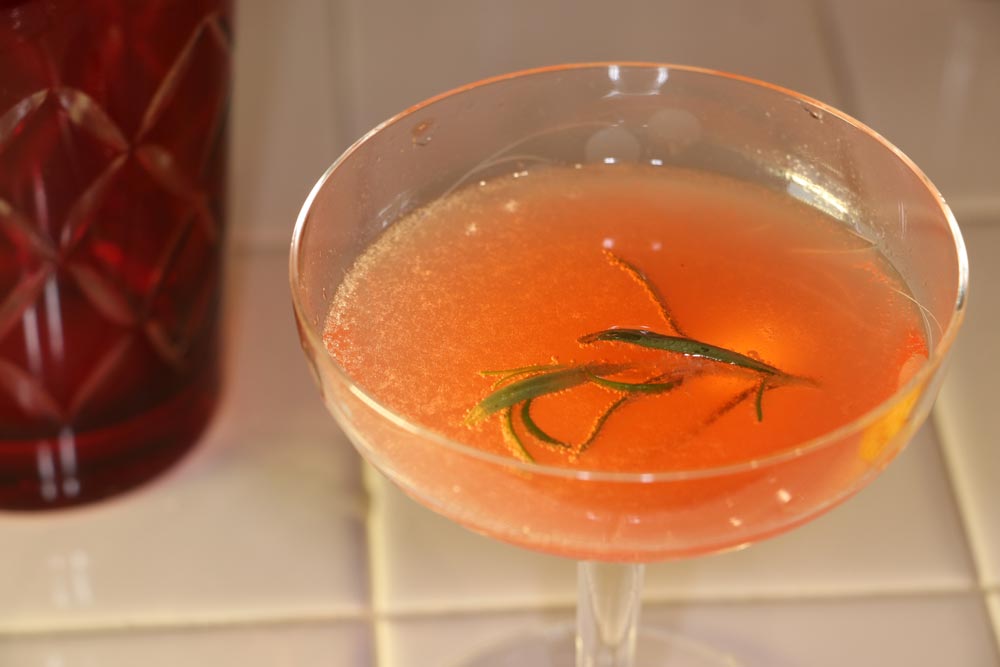 It happened again! The week got away from us. I can’t believe it’s been 6 days since my post 🙁 Hopefully I’ll get my groove back next week and get back on track with the Mr. Boston’s book. There are still 123 pages of recipes to get through so I’d better get to drink’n…

After the Alaska Cocktail, Mr. Boston’s 1935 edition book continues on with a bevy of Gin recipes. Like it’s predecessor, the Alabama Fizz; the Albemarle Fizz calls for the juice of 1/2 a lemon, a jigger of Old Mr. Boston Dry Gin, powdered sugar and sparkling water. The mint leaf garnish is replaced with 1 teaspoon of Raspberry syrup.

Having discovered that the Alabama Fizz was a bit watered down for my taste-buds, I prepared the Albemarle twice. The first attempt was prepared as directed in the book.

When I first read that the Alabama Fizz called for powdered sugar I thought it was a brilliant alternative to simple syrup. Rather than the tedious wait for all the sugar crystals to dissolve, powdered sugar seems to evaporate into the liquid in no time at all. With this in mind, I was excited to try it out.

Unfortunately, after mixing up the Alabama and Albemarle Fizz’s according to their respective recipes I found the final products tasted a bit unnatural. In the case of the Albemarle, I wondered if the really old raspberry syrup I found in the back of the pantry was to blame. So I set out to prove my case by hand crafting homemade raspberry syrup from 5 frozen berries, organic cane sugar and an ounce of hot water. To my dismay, my homemade syrup was not a lot different from the store bought. However, some of the unnaturalness was gone from the drink.

Muddle 2 teaspoons of cane sugar, 5-6 fresh raspberries, and 1 ounce of hot water together.

Strain your raspberry syrup to remove the extra seeds.

I dipped my finger into the powdered sugar and gave the fluffy white stuff a taste. It was sweet like sugar but had a baking soda quality. Slightly salty, almost fishy. Having never really given it any thought I looked to Google for a better understanding of what in the heck powdered sugar really is.

For those of you like me who don’t know about powdered sugar here is what I was able to find… Powdered sugar is created by grinding cane sugar into a fine dust. Cornstarch is added to the mixture here in the United States to prevent the lightweight sugar dust from clumping up. Who knew? 🙂

My new revelation answered two observations I had when crafting the Albemarle Fizz. Firstly, the mixture of lemon juice and powdered sugar became rather thick (cornstarch, of course!).  The unnaturalness I was tasting appears to be the result of the process used to make cornstarch. While cornstarch is basically just corn, the kernels are soaked for 20 to 48 hours in hot water, acid and sulfur dioxide. Mystery solved!

Turns out, taste wise powdered sugar isn’t a great replacement for cane sugar. Even though simple syrup adds an extra step to the process, the work is worth it!

In putting the Albemarle Fizz together I realized that I may have goofed when originally mixing up the Alabama Fizz and it could have played a role in why I felt like that drink was too watered down.

The instructions say to shake well and strain but I’ve gotten so accustomed to shaking over ice I didn’t noticed that no ice is mentioned anywhere. It seems strange since I don’t believe soda water was normally chilled in 1935. Perhaps these cocktails were meant to be enjoyed warm?

Either way, I stuck to the script and thoroughly shook the Albemarle sans ice to test my theory. While the lack of melted ice did help the wateriness of the cocktail, I still think sticking with only 3 oz of soda water rather than filling the 7 ounce glass makes for a better drink.

All and all I wasn’t in love with the Albemarle Fizz which I found strange since I adore all things raspberry. Maybe it was the acidity of the lemon and raspberry together that my mouth frowned upon. Oh well, you can’t win them all 🙂

While the Albemarle Fizz wasn’t a favorite, it inspired a new cocktail creation we lovingly call The Vegas Showgirl. It’s tart, sweet and sparkly. Get the recipe here.