Another day, another Highball cocktail!

I admit it, I’m getting bored with the Brandy. But it looks like after today’s low-ABV recipe the drinks get a bit more lively – YAY!

On par with the other Highball recipes that have graced Mr. Boston’s 1935 cocktail book, the Brandy version offers the choice of mixing 1 jigger of spirit with either Ginger Ale or Carbonated Water. Unfortunately, my new batch of homemade alcoholic Ginger Beer won’t be ready until later on in the week so tonight I resorted to the traditional Canada Dry.

At a ratio of 1.5 ounces liquor to 6 ounces of Ginger Ale, the Brandy Highball is only 8%. A little more than a beer. Like the Brandy Fix, this seemed like a great pool side drink. Refreshing and void of too much alcohol. When it came time to go hop in the water, poor Ryan had a migraine. Now, instead of lounging, I find myself drinking alone as I share today’s drink with you.

Like yesterday’s recipe, there isn’t a lot to say about this drink. One thing I can mention is, unlike the Brandy Gump, I actually enjoyed today’s cocktail 🙂

In an effort to fancy up this basic alcoholic beverage, I used a fresh lemon peel to rim the glass with juice. My hope was that adding zest would liven drinking experience through aromatics. Oddly enough, this technique didn’t really stand up against the fizzy Ginger Ale. Even after steeping the peel and Brandy for a good 10 minutes prior to adding soda, the lemon is too faint to notice.

Despite Canada Dry being a sugary drink by itself, I was surprised that the Brandy actually increased the sweetness. It is a good combination but I’d say it borders on being too sweet.

I added two dashes of Angostura Orange Bitters in hopes of balancing the flavor. I think the Gentian Root did the trick adding just a hint of bitterness to tone down that sugar. The orange essence added to the drink were the lemon peel was not able to. It was very nice indeed!

Rather than abandoning the Brandy Highball on the counter-top in favor of a beer (as I did with the Gump last night), I found this cocktail to be nice way to unwind after a long day. Initally I was relieved to find that no lemon juice was called for but then I needed extra zip – geez, some people are never happy!

By the end of this blog series I think Ryan and I will have successfully imbibed our way through a whole grove of citrus fruit. Perhaps I need to start a lemon counter to track the produce slaughter – LOL

Tomorrow Mr. Boston’s lets us explore the Julep and I’m super excited to welcome mint back into my drinking routine! Until then – Cheers! 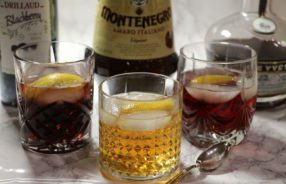