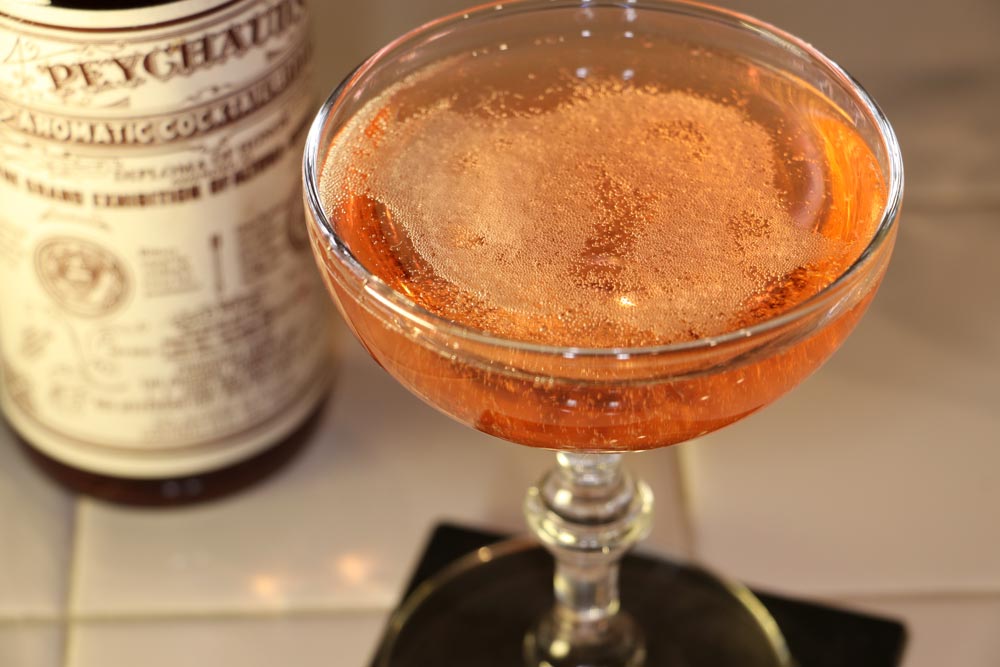 As we continue further onto the fourth page of Mr. Boston’s 1935 edition, the Alfonso Cocktail introduces a new ingredient… Champagne!

In discovering that bubbly was going to play a part in this adventure, Ryan keenly noted that the wise would mark each and every champagne recipe throughout the book to try in tandem since Champagne is not an ingredient to be stored once the cork is popped.

After an hour combing the book for recipes that called for Champagne, I discovered a total of 11 strewn throughout the pages. Without delay we stopped off at Albertson’s on the way home for some fizzy and wound up leaving with 4 bottles… Curse their buy 4 and save promotion! If you want to cause the cashier to think you are a raging alcoholic, this will do the trick 😉

There was only one true French Champage available but spending $50 for short lived cocktail mixer was just too painful a thought. So we opted for California Champagne from Barefoot, Korbel and though I’m slightly ashamed to admit it, Cooks.

From Barefoot Cellars we are trying out the Brut, Extra Dry and Pinot Grigio Champagne. Korbel and Cook’s offering are both Brut.

As I reviewed the recipe for the Alfonso, I took note of the glassware suggested for the drink. At the back of the book is a handy pictograph of the various stemware and mixing tools that were used in 1935. Like much of the book, the Alfonso’s description to “Use Champagne glass” is vague. The pictograph notes two styles of Champagne glassware. Famously used by Leonardo DiCaprio in The Great Gatsby (although the one he uses looks slightly too big for the era), the Champagne Saucer is described in the book as being 6 oz and notes Burgundy (sparkling). Some call this glass a Coupe and it’s a glass we use often for our cocktail photos.

The second glass is new to me though at first blush it looked rather ordinary. The description reads ” Champagne Hollow Stem Glass 5 oz Burgandy (sparkling).” The note about a hollow stem is what caught my eye. Google to the rescue! Sure enough the result yielded a glass I’d never seen despite years of active antique shop hunting. It is a oddly shaped glass with a traditional red wine bowl but the stem is tear dropped to hold liquid. I successfully found and purchased a pair from The Traveling Twins on Etsy and my new glasses should make the short trek from Carmel, CA in the next couple of days!!!

Being totally impatient, Ryan and I started trying out the recipes as soon as we walked through the door. Up first was the Alfonso.

All along I assumed that the measurements noted in the various recipes were in ounces. The Alfonso made me rethink this theory. Calling for 1/4 glass of Connoisseur* Creme de Cacao, the instructions go on to the aforementioned “Use Champagne glass” without further instruction. As both the only vintage Champagne glass we had handy was a coupe and the book said a Champagne sauce should be 6 ounces, we decided a jigger of our pre-chilled Korbel should be appropriate.

In following the instructions for this drink to the letter I must say the Alfonso was the most tedious cocktail to prepare thus far. This is very strange since it is also the most simplistic ingredient list of the lot. The problem is the “lump of sugar.” Sugar does not like to dissolve in alcohol. Ryan and I learned this through years of creating spice infusion blends that use sugar as an ingredient. Don’t get me wrong, sugar will eventually disappear in spirits but it won’t be quick and it takes a lot of stirring.

The Alfonso is 100% alcohol and trying to turn a sugar cube into a liquid is a painstaking task. To add confusion, the recipe says “stir slightly” which makes no sense at all if you want to have any sugar in your cocktail. Ryan insisted that I mash the cube to dust but I was trying to stick to the script. It took 15 minutes of stirring to get the little bugger to melt 🙁

The next mystery was which bitters to use. The recipe just says “Bitters” but is that Angostura or Peychaud’s. We sampled each of the bitters and each thought that Peychaud’s would be the clear winner in combination with the other ingredients. After douching the sugar cube with the bitters, and stirring the mixture with the needed Creme de Cacao we had a nice light pink liquor. The fizzy Brut added sparkle to the drink catching the remaining undissolved sugar crystals. It was beautiful!

The first sip was nice but the sweetness of the drink quickly kicked in leaving a thirst inducing aftertaste in its wake. To combat the sweetness we tried adding a couple more dashes of Peychaud’s and splash more Champagne. It helped, but it was no longer balanced with the Champagne taking prominence. For giggles we decided to remake the drink with Angostura to compare. The difference was night and day! No longer was the cocktail overly sugared but now it was balanced and delightful. A definite improvement.

While we both enjoyed the Alfonso Cocktail with Peychaud’s, it could not hold a candle to the Alfonso with Angostura. It’s a must try 🙂

Since the bottle of Champagne had already been opened we continued on through the book but I’m going tell you all about those as they appear in the book. For now we must take a short break because our next cocktail needs a very special ingredient. We can’t seem to get our hands on a bottle of Kümmel here in Las Vegas and planned to make the 5 hour drive to Los Angeles next week to pick some up. In the meantime, we will continue to share our cocktail creations on our Instagram page for your viewing delight. Cheers!