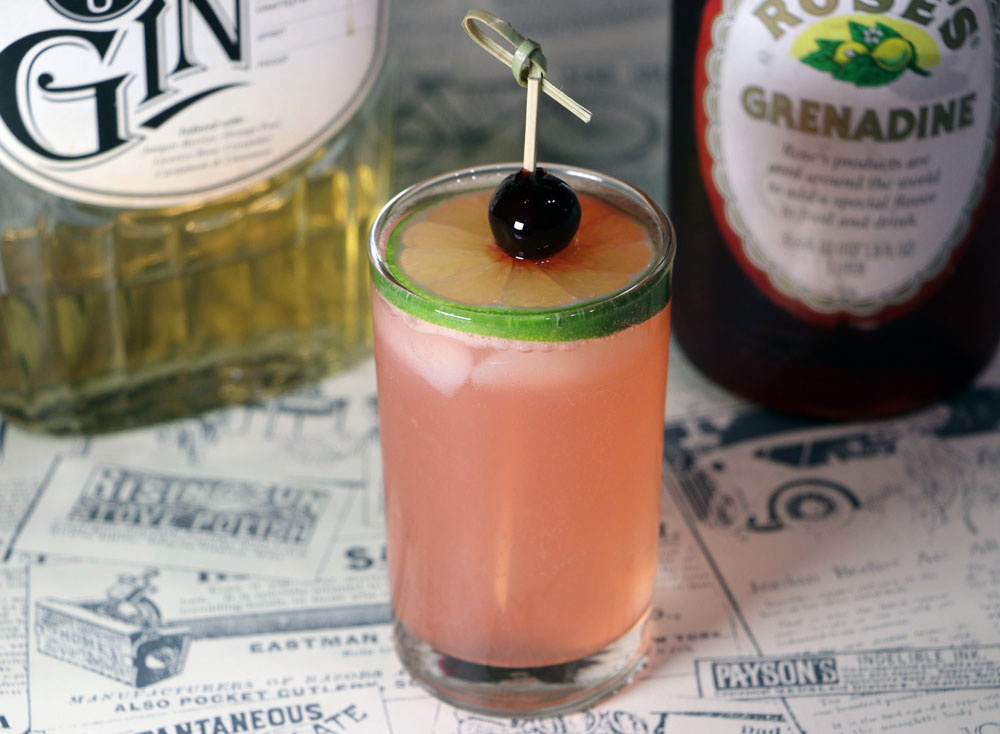 We didn’t have any milk in the house for tonight’s scheduled Mr. Boston’s recipe. Rather than getting dressed and standing in the lines at Albertson’s, I decided to do something I’ve tried hard to avoid… skip ahead.

Rather than the last apple cider cocktail in the series, tonight we are trying out the Circus Rickey. The recipe is a basic Gin style Rickey with a couple dashes of Grenadine for color.

Ryan found an unfiltered bottle of our homemade Gin lurking in the back of the liquor cabinet. I decided to filter it out and use some in the Circus Rickey.

I’m not sure how long this batch had been infusing but it seems like we’ve discovered the time limit. While the Juniper Berries appear to have stopped releasing oils into the Vodka, the Cardamom was still going strong and it took over the finished spirit. I tried to smooth out the flavor profile by cutting the strongly infused compound Gin with equal measure Vodka. It helped but wasn’t a cure. I can only hope that as the two meld the flavor will return to its normal balance of deliciousness.

Despite the Gin’s odd quality, I pressed on with it as the base of the Circus. In an effort to improve the appearance of the final cocktail, the Aeropress was employed to strain the pulp from the freshly squeezed Lime juice.

My first round of straining went off with out a hitch but the drink was still a little cloudy so I doubled down and set out to clarify into our lovely crystal Delmonico glass. While I should have anticipated that the downward pressure of the Aeropress might break the glass below, I did not. To our dismay, the glass shattered and threw shards of broken crystal into the dining room 🙁

Mr. Boston’s 1935 recipe was too tart for me and I opted to double the Grenadine in an attempt to sweeten things up. It helped a bit but in the end we wound up free-style pouring syrup into the glass until we were happy with the drink. Since the Juniper notes were buried beneath the Cardamom, I topped the glass off with roughly 1/2 ounce of Empress 1908. The blue made the drink even more festive and improved the overall flavor profile. In fact, I’m rather enjoying it now.

The final Circus Rickey recipe I ended up with looked like this:

This wasn’t my favorite drink of the series, but it wasn’t the worst. If you enjoy Rickey’s then you’d likely enjoy the Circus version. Tomorrow I’ll travel back in time and share the Cider Egg Nogg – Ciao!